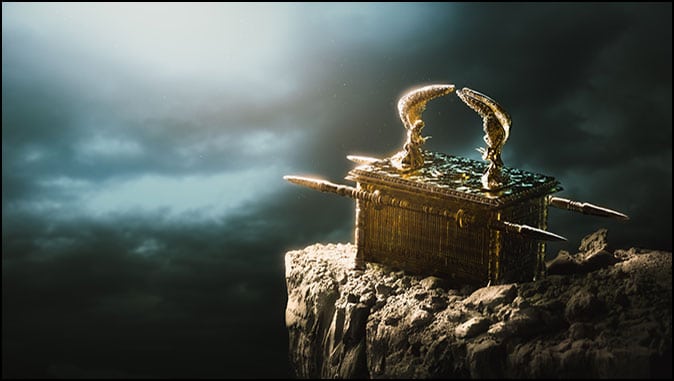 The Covenant Relationship
A Bible Study by Jack Kelley

And Jonathan made a covenant with David because he loved him as himself. Jonathan took off the robe he was wearing and gave it to David, along with his tunic, and even his sword, his bow and his belt. (1 Samuel 18:3-4)

The making of a covenant was serious business. It was the strongest bond known to men, and had both business and personal applications that extended even to the descendants of the two parties involved. A covenant was typically solemnized by great ceremony and ritual, some of which is mentioned in the passage above. All in all it went like this.

First, several animals were cut in half and arranged along a path. Their purpose was to symbolize the penalty for breaking the covenant. The two men entering into a covenant relationship walked between and around the animal parts in a figure eight. (An eight on its side is the symbol for infinity.) This was to show that they understood and accepted the penalty and that the agreement committed them forever. (When God entered into His covenant with Abraham, promising him an heir and giving him the Promised Land, He was the only one who walked between the animals. This meant that only He was bound to the terms. There was nothing Abraham had to do. In fact, God put him to sleep so he couldn’t participate. The land was given to Abraham and his descendants unconditionally and in perpetuity (Gen.15:9-21).

Then they performed up to seven ceremonial acts; each also designed to underscore the seriousness and permanence of the relationship they were entering. In the passage above, we see David and Jonathan formalizing their covenant with the first two of these.

1. Each man handed his outer garment to the other, symbolizing that everything belonging to one also belonged to the other.

2. Exchanging sword, bow, and other weapons indicated that each was pledging himself to the other’s defense; placing his power, as it were, at the other’s disposal.

3. They each cut themselves in the wrist to make their blood flow and then joined their right hands and forearms together in a gesture from which we get the modern handshake. The idea here was that the blood from one was now mixed with the blood from the other. The two had become one. In some cultures a bride and groom still cut themselves this way and mingle their blood during their wedding ceremony, and the American Indian notion of becoming “blood brothers” is also derived from this. (The Hebrew word translated covenant comes from a root that means to cut. It could apply to the animals, the men, or both.)

We often hear the phrase, “blood is thicker than water.” It usually refers to the strength of family relationships, but its original intent was different. It meant that the blood of the covenant surpassed the birth waters. As Jonathan’s actions toward David demonstrate, covenant relationships exceeded family ties in strength and durability (1 Samuel 19:1-3).

4. They let the cut heal in such a way as to leave a visible scar on their wrist. This was to alert people that they were stronger than they appeared to be, since others stood behind them pledged to their defense.

5. They shared a ceremonial meal, usually of bread and wine. It was another way of uniting them since to this day middle-Easterners believe that sharing from the same loaf of bread or the same flask of wine binds the participants together. In the first Biblical mention of this, Melchizedek and Abraham shared such a meal (Genesis 14:18).

6.Still another way was for each to take a portion of the other’s name, similar to the way the bride takes the name of the groom in Western culture. (When God entered into a covenant with Abram He changed his name to Abraham, requiring us to exhale when we speak his name. The exhaled breath symbolizes the Ruach Elohim or Spirit of God.)

7. And finally they built a monument or memorial to the ceremony. This could be something as simple as a pile of stones or as complex as a forest or a flock of animals, such as when Jacob and Laban formed their covenant (Genesis 30:25-36).

They went through such ceremony because their lives depended on their covenant partners. There could be no doubt in their minds as to each other’s reliability.

A shepherd had to get his wool into the hands of the merchants. But they lived in the cities and his sheep had to stay in the mountains. He couldn’t just leave them and go off to sell his wool, the sheep would be gone when he returned. Still, he needed the things he could only buy with the money he got from selling the wool. So he entered into a covenant with a wool broker. The broker took his wool into the city and sold it to the merchants. With the money he got, he purchased the things the shepherd needed and brought them back to him.

The shepherd had to trust that the broker would guard the wool with his life, and get the best price possible for it at the market. He also had to believe that the broker would pay as little as necessary for the goods he brought back, protecting them all the way as if they were his own. The broker had to trust that the shepherd would care for his flock and maximize his wool production so that when he came back there would be another crop to sell. It was an inter-dependent relationship built on trust.

And One From Real Life…2 Samuel 9

Some time after David and Jonathan formed their covenant, Jonathan was killed in the Battle of Beth Shean (1 Sam. 31:2), while David went on to become King of Israel (2 Sam. 5:1-5). But as I said, covenant agreements extended even to the descendants of covenant heads. One day King David asked his advisors if there was anyone left of Jonathan’s family to whom he could show kindness for Jonathan’s sake.

They brought in one of Saul’s former servants who told him of a crippled boy named Mephibosheth. He was Jonathan’s son, living in a place called Lo Debar. When David had become King of Israel, all of Saul’s family (Jonathan was Saul’s son) had fled for their lives for fear that David would take revenge on them for the way Saul had mistreated him. In their haste to escape, his nurse had picked up the 5 year old Mephibosheth to carry him, but they had fallen on the stone floor, breaking his legs and crippling him for life. (2 Sam. 4:4) As he grew up his family had convinced Mephibosheth that David was responsible for his condition and still wanted to kill him.

Upon learning Mephibosheth’s whereabouts, David sent his soldiers to fetch him. When they brought him into the presence of the King, Mephibosheth, fearing for his life, bowed before David and asked him. “What is your servant that you should notice a dead dog like me?” (2 Sam. 9:8).  David reassured him and told him of the covenant he had with Jonathan. Then David restored to him all of his grandfather Saul’s property and gave him servants to work the land so his needs would always be met. Finally David asked him to come live in Jerusalem, and eat at the King’s table just like one of the King’s own sons.

It’s a beautiful story of kindness and forgiveness that illustrates the depth of a covenant relationship like no other, and it has a parallel in our lives. To see what I mean, let David represent God our Father, with Jonathan as the Lord Jesus, and Mephibosheth as you and I.

Long before we were born the Father and the Son entered into a covenant on our behalf. Our Father said to Jesus, “Son, if you’ll die for them I’ll forgive them”

Jesus replied, “Father, if you’ll forgive them I’ll die for them.” And so the Everlasting Covenant was formed.

Each time God entered into covenant with man, man proved untrustworthy and soon broke it. Adam ate the forbidden fruit, Noah’s descendants refused to scatter and re-settle the Earth, the Children of Israel broke the commandments, and so on. The salvation of God’s children was so important to Him that no mere man could be trusted to be faithful.  God Himself had to become a man so mankind could be saved. “You are my son,” He told Jesus, “Today I have become your Father.” (Psalm 2:7)

So Jesus became a man to save mankind, and stood before our Father as our covenant head.

Later, while God pursued us, we ran for our lives. We’d heard the stories of His wrath and had been told that He was responsible for our infirmities. Finally one day He caught us and as we trembled at His feet in fear for our lives, He reassured us and told us of the covenant He had made with His Son. Then He restored our inheritance (Gal. 4:4-7), invited us to dwell with Him, to eat at the King’s table as part of His family, and to consider ourselves as His children (John 1:12-13).

What Did He Ever Do For Me?

Then He told us what His Son did for us. He said that Jesus,

1.Gave us His robes of righteousness and clothed Himself in our garment of sin.

2. Pledged His sword (the Word of His mouth) to our defense.

3. In being nailed to the cross, His wrists were cut and allowed to heal so as to leave scars as evidence of the covenant.

4. Allowed His blood to flow into and over us, cleansing us of all our impurities.

5. Shared a covenant meal of bread and wine with us and asked that we do this with each other as a memorial to Him.

6. Gave us His name, for we are called Christians.

7. Built a monument, His covenant flock, and said the gates of Hell would not prevail against it.

And as in Abraham’s case, all we have to do is receive it. It’s unconditional and perpetual.

I used to think that John had misspoken in 1 John 1:9. Instead of saying of God, “If we confess our sins, he is faithful and just and will forgive us our sins and purify us from all unrighteousness,” I thought John should have written, “He is faithful and merciful…” thinking that it’s out of God’s mercy that we’re forgiven, not His justice. Then I learned about the Everlasting Covenant and realized that He’s obligated to forgive us. He made a covenant with His Son promising to do it. And He can’t break His promise because He’s faithful and just.

The Son has died for us, and now the Father must forgive us, and when He does, all our sins and the shame and guilt that go with them are wiped away. Like Mephibosheth, our inheritance is restored, we’re set for the rest of our lives, and we sit at the King’s table as one of His children. By the way, Mephibosheth’s name comes from root words that mean “dash to pieces” and “shame”.  When He died for us the Lord dashed to pieces all the shame associated with our former self and replaced it with the righteousness of God.  Selah.