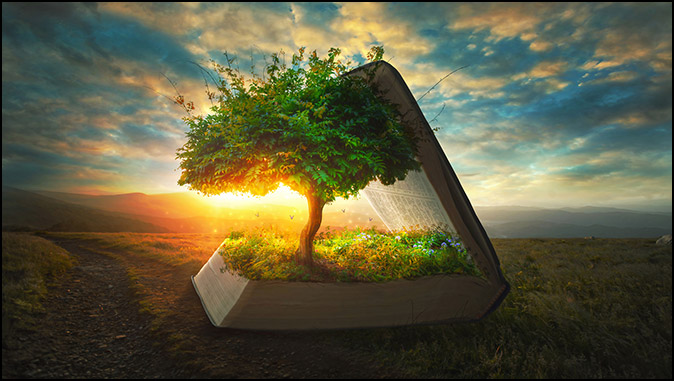 The Book Of Life
By Jack Kelley

The word book appears 188 times in the Bible. The Hebrew version is cepher (pronounced safer) and the Greek is biblos from which we get the English word Bible. The first mention of a book is in Genesis 5:1 introducing the stories of 8 patriarchs that Moses wove together to form the book of Genesis.

The first time mention is made of the Book of Life (literally Book of the Living) is in Exodus 32 where the Lord threatened to destroy all the Israelites because the Golden Calf rebellion (Ex. 32:10). Moses made intercession for them asking the Lord to forgive the sins of the people or if not to blot him out of the book (Ex. 32:32). He was offering to die for the sins of the people. Then the Lord said instead of destroying them all right then He would delay their ultimate punishment until a future time. But when that time came He would blot out the names of all who had sinned against Him. (Ex. 32:33-34)

The Principle of First Mention holds that the first time an important bit of doctrine is mentioned in the Bible, we’ll often find details surrounding it that help us gain a deeper understanding. In this case it’s clear. All our names are written in the Book of Life. Sinning against God will cause them to be blotted out. To avoid having our names blotted out immediately upon sinning we need an intercessor. Moses was told his intercession would only postpone the judgment, and that those who sinned would eventually have their names blotted out of the book. So Moses, the Law giver, is seen here as a model of the Law. The sacrifices offered under the Law could only postpone the judgment for mankind’s sins, they could not provide a permanent pardon. This would later be confirmed in Hebrews 10:1-4 and other places.

From what we know of the Yom Kippur ceremony, this temporary postponement had to be renewed every year and that’s what made it the most solemn day of the year. It’s hard for us to imagine the degree of apprehension this day brought. The Fate of the nation and its people literally hung in the balance. Would God extend the postponement or would He require an accounting then and there?

When Were Our Names Written In The Book?

Psalm 139 speaks of the relationship between God and the pre-born. It makes a strong case for life beginning at conception, saying the Lord knit us together in our mother’s womb (Ps. 139:13) and that all the days ordained for us were written in the Book of Life before one of them came to be (Ps. 139:16).

There are two pieces of important information here. The first is that before we were conceived we didn’t exist in any form. We weren’t a spirit waiting for a body to inhabit, or coming fresh from a previous life to begin a new one on our journey to Nirvana. And the second is while God knows the end from the beginning, our lives don’t consist of some tightly controlled script we’re forced to follow. The fact that God knew all of our days before we lived one of them simply means that He knew the history of our life while it was still future to us.

Israel And The Book Of Life

An Angel confirmed to Daniel that at the time of the Great Tribulation all Daniel’s people whose names had been written in the Book of Life would be delivered (Daniel 12:1). This was confirmed by Paul in Romans 11:25-26. He said after the rapture of the Church, the partial blindness that has kept Israel from identifying their Messiah would be lifted and representatives from all the 12 tribes would accept Him as their Savior. John wrote that at the beginning of the Great Tribulation believing Jews will be carried away into the desert to be protected from Satan for its duration (Rev. 12:14). As the time of the 2nd Coming approaches others who have survived will also be saved (Zechariah 12:10). Together, these Jews will populate Israel during the Millennium, where they’ll be joined by resurrected Jews of Old Testament times who died in faith of a coming redeemer. (Daniel 12:2)

The Church And The Book Of Life

In the New Testament, the Book of Life is mentioned eight times. Seven of them are in the Book of Revelation. The other one is in Phil. 4:3 where Paul said the names of his fellow laborers are listed there. But there are other places where the Book of Life is in view, even though it isn’t named as such.

For instance a group of disciples had just returned from ministering in Israel. They were filled with joy knowing that even demons had submitted to them in the Lord’s name. Jesus told them, “Do not rejoice that the spirits submit to you, but rejoice that your names are written in heaven.” (Luke 10:17-20)

In Rev. 3:5 Jesus said He will never blot the names of those who entrust their destinies to Him out of the Book of Life. In Romans 8:34 we read that Jesus is at the right hand of God making intercession for us. From this we can see that the Lord’s intercession is sufficient to give us a permanent place in the book, while Moses could only promise temporary security.

“For you know that it was not with perishable things such as silver or gold that you were redeemed from the empty way of life handed down to you from your forefathers, but with the precious blood of Christ, a lamb without blemish or defect. He was chosen before the creation of the world, but was revealed in these last times for your sake.” (1 Peter 1:18-20)

The only other place where the Lamb’s Book of Life appears is in Rev. 21:27 where it says only those whose names are written therein can enter the New Jerusalem. This identifies the New Jerusalem as the exclusive home of the Church

Unbelievers And The Book Of Life

Rev. 17:8 says the inhabitants of the Earth whose names have not been written in the Book of Life from the creation of the world will be astonished to see the Beast because he was once, now is not, and yet will come. This tells us that not only were our names written there before we were born as Psalm 139:16 revealed, but were actually written there from the creation. It also reveals that those who are astonished by the beast have already had their names blotted out of the book, just as the 3rd angel of Rev. 14 had warned (Rev. 14:9-11). The Greek word translated astonished in Rev. 17:8 means to marvel at, or hold in admiration. Worshiping the anti-Christ is cause for having one’s name blotted out of the book.

The Great White Throne judgment of Rev. 20:11-15 shows the dead being judged according to what is written in the books (Rev. 20:12). Several books will be used in this judgment. They contain the record of everything everyone ever born has said (Matthew 12:36-37) or done, whether good or bad, in public or in secret (Ecclesiastes 12:14). But in concluding the passage, John wrote that regardless of their good works, if their name has been blotted out of the Book of Life they will be cast into the Lake of Fire. The only way to prevent being blotted out of the book is to allow the death of Jesus to pay the penalty for our sins. “Salvation is found in no one else, for there is no other name under heaven given to men by which we must be saved” (Acts 4:12).

This study was not meant to cover every reference to the Book of Life, whether direct or indirect, but to give us a more complete understanding of its purpose. Our names were inscribed there before the Creation as a record of our existence, and because of our belief that the Lord died for us and rose again they can never be blotted out. Halelujah.  Selah.