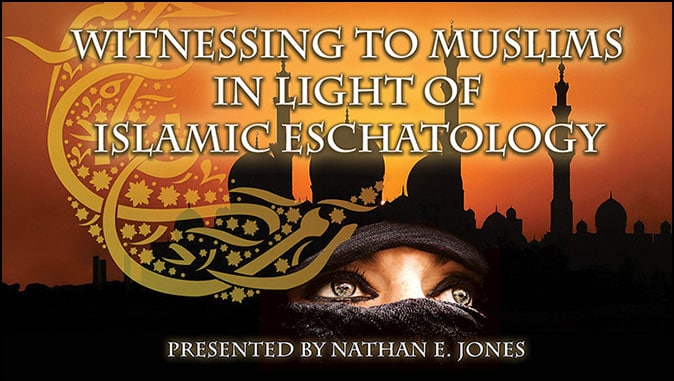 In Part 1, we began to get a handle on the history of Islam and its founder. Now we’ll drive down the wild road of Islamic eschatological beliefs. Let’s continue this academic presentation by evangelist Nathan Jones!

Contained within Islam’s religious beliefs is its own system of eschatology, meaning its own particular views of future events. The following is what Islam teaches concerning the end times, primarily understood from the Hadith, which has incorporated elements of the Torah, New Testament, and Zoroastrianism. Not all Muslims believe in every, or even some, of these eschatological elements, just as in Christianity there are widely divergent views concerning the last days, but a belief in eschatology remains essential to a Muslim’s belief system (Sura 2:177).

Bear in mind a number of prophecies and prophetic characters taught in Islam were incorporated from other religions, so some of these will sound familiar from the Bible. As Islamic professor Samuel Shahid points out:

“The Hadith was compiled at a time when Islamic authorities knew much more about the Bible and Christian traditions and literature. Thus, many Hadith passages were manufactured and embellished and were heavily influenced by Christian sources.”

Christians should not forget, though, that Islam is a man-made religion. Satan does not know how the end times are going to turn out except from what he reads in the Bible. So, as Islam’s end-time views are delineated, Christians should not be concerned that any of these events as foretold in the Hadith are actually going to happen.

Islam generally believes in a savior called the Mahdi. He will arrive during a time called “The Hour.” There will be several very interesting major and minor signs that surround his coming, with the major signs standing absolutely non-negotiable in the Muslim mind. Some of the more fantastic minor signs include women outnumbering men 50 to 1, men will eat with their tongues like cows, time will contract, wild beasts will speak, and the Euphrates River will uncover a mountain of gold. And the Islamic world will be locked in a full-scale war of annihilation against the Jewish people. When that happens, the Mahdi will reveal himself.

Islamic eschatology also has an Antichrist figure called the Dajjal. Of course, since Islam teaches its adherents to hate the Jewish people, the Dajjal is supposedly going to be Jewish. The Dajjal is prophesied to be born in Iran. He has one eye, and the word Infidel is actually tattooed right on his forehead. And he will lead an army of Jewish people.

In response to the threat of the Dajjal and his army, the Mahdi shows up. Those Islamic sects led by the Iranian Ayatollahs call the Mahdi the Twelfth Imam. He was an infant who supposedly was hid in a well during the ninth century, yet he returns to fight to establish a millennium of perfect equity. The Twelfth Imam is a direct descendant of Mohammad.

Jesus also plays a part in Islamic eschatology and is sometimes confused with the Mahdi. The Mahdi will lead Muslims, along with Jesus, against the Dajjal. Islam teaches that Jesus will return to the Mount of Olives, which they clipped from the Bible, and he will defeat the Dajjal near Tel Aviv. He also defeats the Gog-Magog invaders, a theme from Ezekiel 38-39, which they call the War of Yajuj and Majuj (Sura 18:96; Sura 21:96). Jesus then converts the world to Islam, breaks all the crosses, kills all the pigs, and he marries, has children, and then he dies.

The world during these battles will suffer through many natural disasters and assaults by dangerous beasts. Smoke will engulf the world. There will be landslides. The sun will begin rising from the west. Fire will round up all the people of Syria.

That brings the world up to the Day of Reckoning. For a Muslim, the Day of Reckoning is like Purgatory. Should a Muslim be considered the most faithful, even being the most devout of teachers, no matter what level of holiness a Muslim attains to, they are going to end up suffering for at least a little while. A Muslim must suffer because Islam believes in a works-based salvation.

Allah arrives to judge each person based on their works. The two angels assigned to each person will lay their assigned person’s deeds onto scales. And should the deeds be found worthy, the person is allowed to cross a bridge. Those who are unfaithful will fall off the bridge right into Hell, though there are still some chances to be saved after that and so later be rescued from Hell.

This sura and others explain that the martyrs who were slain in life for the advancement of Allah are promised in Paradise to receive 72 voluptuous virgins for their huris, or harem. Unlike Christianity, Paradise is not a place of spiritual delight and communion with God. Rather, Allah remains off in the distance, he’s aloof, and unapproachable. Paradise for Muslims is all physical, all sensual, really all sexual, where women remain as they were in life — mere chattel and playthings for men. One would wonder then why any woman would be interested in becoming a continual concubine throughout their eternal life. Some say it is worth it for the price of gaining eternal youth.

There is a Hell in Islamic eschatology. For those who go to Hell, Sura 4:56-57 says:

“Indeed, those who disbelieve in our verses [the infidels] we will drive them into a fire. And every time their skins are roasted through we will replace them with other skins so they may taste the punishment. Indeed, Allah is ever exalted in might and wise.”

Hell, like Paradise, in Islam also contains seven levels. An entire level of Hell has been reserved just for Christians and another level of Hell reserved for the Jews. In keeping with Mohammad’s disdain for women, there’s a level of Hell primarily reserved for the ladies. Not many women are going to make it into Paradise because they are utterly dependent on strict obedience to their husbands in life, unless she is one of the eternal virgins. Although, at a 72:1 ratio, it is quite questionable how this works out. Unfortunately, for the Muslim female, Hell exists primarily for women.

In the sixth part of this series on Islamic eschatology, we’ll reveal Islam’s role in biblical eschatology.

The Apocalypse Journals: Volume 2 By Pete Garcia Every empire at one point had some…