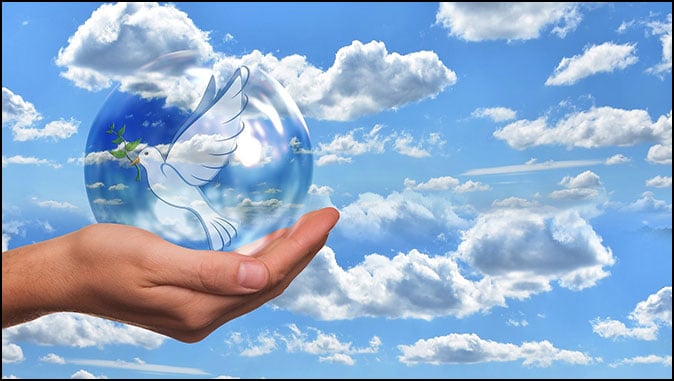 Will the Peace Accords Stabilize the Middle East?
By Jonathan C. Brentner

From a biblical prophecy standpoint, how are we to regard these peace accords that the Trump administration refers to as the “Abrahamic Accord?” Opinions vary widely within the Christian community. Many welcomed the news of these agreements and praised the President and his team for achieving these milestone accords.

Others, such as a popular prophecy speaker, did not share the excitement of those celebrating the deals. He criticized them because of the dividing of the Land inherent in them, which is also a feature of the Deal of the Century unveiled back in January.

Jared Kushner’s statement regarding these deals lends credibility to this prophecy teacher’s critique. He said, “We were trying to save the two-state solution…If we kept going with the status quo…ultimately, Israel would have eaten up all the land in the West Bank.” In other words, he praised these deals for stopping Israel from occupying more of their Land.

Kushner’s statement negated any enthusiasm I might have had for these accords. I love the response of Terry James to Kushner, “In God’s view, no area of land He gave Israel is negotiable. There is no room whatsoever for a ‘two-state solution’ to any problem Israel’s surrounding neighbors have in failing to be at peace with the Jewish State.”

The peace deals recently inked on the White House lawn have clear prophetic implications. However, does that mean they will stabilize the Middle East and provide needed security for Israel? I believe the answer is “no” to that question because of the following considerations.

They Represent a Further Aligning of Nations Per Ezekiel 38

According to Ezekiel 38, the countries who signed these peace deals with Israel are not part of the last days’ invasion of Israel. Many Bible scholars believe that the opening verses of this chapter identify Russia, Iran, and Turkey as the leaders of the future Gog Magog attack on Israel (38:1-6). And just as Ezekiel predicted long ago, these nations currently pose the greatest threat to Israel’s security with their forces and weapons positioned in Syria.

Ezekiel also specified people groups who would not invade the Land during the Gog-Magog war, but merely protest, “Sheba and Dedan and the merchants of Tarshish and all its leaders will say to you, ‘Have you come to seize spoil? Have you assembled your hosts to carry off plunder, to carry away silver and gold, to take away livestock and goods, to seize great spoil?’” (38:13). Most prophecy experts believe that “Sheba and Dedan” refer to Arab nations as Saudi Arabia, the United Arab Emirates, and Bahrain.

The Heritage Foundation listed several benefits for Israel from the two agreements stating that they “clear the way for Israel, Bahrain, and the UAE to ramp up trade, investment, tourism, and technical and strategic cooperation against Iran.” These are true, at least for the short-term.

But I find it interesting that the statement lists “cooperation against Iran” as a positive outcome. The Bible says that when Iran along with Russian and Turkey attack, these nations will merely protest rather than defend Israel. Only God will come to her defense.

They Confirm the Emphasis on Peace During the Last Days

Everyone who spoke at the signing ceremony for the peace accords emphasized “peace and security.” Since neither Bahrain or the United Arab Emirates pose any threat to Israel, these comments must refer to the Palestinian hostility toward Israel and that somehow these agreements will pressure the Palestinians to make a similar deal for peace.

The summation of these deals on the Heritage Foundation website confirms this, “The Bahrain and UAE diplomatic pacts could lead Palestinians to adopt a more realistic negotiating position and join the other Arab states on the peace train.”

The apostle Paul tells us these words will be the buzz words of the world in the last days, “While people are saying, ‘There is peace and security,’ then sudden destruction will come upon them as labor pains come upon a pregnant woman, and they will not escape.” (1 Thess. 5:3). It’s when the world revels in the mindset of peace that the wrath of God descends on the world with a loud bang.

They Establish a Pattern the Antichrist Will Use

Sometime after the “sudden destruction” that occurs at the start of the day of the Lord, the antichrist will appear on the world stage. The prophet Daniel tells us that his peace covenant with Israel will mark the beginning of the seven-year tribulation, “And he shall make a strong covenant with many for one week, and for half of the week he shall put an end to sacrifice and offering. And on the wing of abominations shall come one who makes desolate, until the decreed end is poured out on the desolator” (9:27).

This verse has much significance for the events of September 15. First, while it’s clear that the peace deal is with Israel, it also includes “many” others. It appears the antichrist will continue the current pattern of involving other nations in his deal with Israel, just as we see now in the world’s attempt to involve other Arab nations to secure her peace with the Palestinians.

Second, one might better translate the opening words of verse 27 as “And he shall make stronger (or superior) a covenant.” The implication in the Hebrew is that the antichrist will take an existing peace plan and make it better. He will most likely sweeten any existing treaty by allowing Israel to rebuild the third temple. We know he will later deceive the people of Israel who will need to run for their lives when he desecrates the temple (Matt. 24:15-22).

In the midst of war and turmoil at the start of the day of the Lord (perhaps the Gog-Magog war), the antichrist will bring peace to Middle East, but it will only be a ruse. This lawless one will use peace to put his enemies at ease and later destroy them when they let down their guard (Dan. 8:25 KJV, Rev. 6:1-4).

They Include the Dividing of the Land

The statements of Jared Kushner and the Heritage foundation reveal that one underlying purpose of these deals is to bring the Palestinians to place where they will negotiate peace with Israel. However, that presupposes a two-state solution for the sake of peace, which would lead to a dividing of the Land.

“What’s the problem with that?” you might ask. First of all, God gave the land to Abraham and his descendants through Isaac and Jacob (Gen. 15:12-21; Psalm 105:8-11). Notice that Psalm 105:10 describes this promise of the land as an “everlasting covenant.” The Land belongs to the descendants of Jacob forever and to no one else.

At the end of the tribulation, Joel 3:2 tells us that God will “gather all the nations and bring them down to the valley of Jehoshaphat. And I will enter into judgment with them there…” Notice the reasons the Lord lists here for His anger with the nation, “…because they have scatter them among the nations and divided up my land.”

The dividing of the Land of Israel will not end well for all those who participate in it, to say the least. Any deal that leads to this will surely bring God’s judgment, not lasting peace.

Please know that I admire President Trump and believe he has done a spectacular job of leading our nation. However, as Terry James points out in his post, someone needs to caution him regarding his pursuit of peace at the expense of dividing the Land.

The behind scenes effort to preserve a two-state solution through the current peace initiatives causes alarm bells to ring in my mind.

Yes, Israel will benefit from the normalizing of relations these Arab nations and that is great news for the short-term, but the deals will not result in the stabilization of the Middle East nor will they contribute to any lasting peace in the region.

I say this for two key reasons.

First, the Land belongs to God and He gave it to the descendants of Jacob with an “everlasting covenant.” As such, He will judge those who seek to divide the Land and give a portion of it to anyone else (Joel 3:1-3; see also Zech. 12:1-3). Any agreement that facilitates the giving of a portion of it to the Palestinians through a two-state solution will not stabilize the region for any more than a short time. In the end, it will bring God’s wrath on all who participate.

Second, the Gog-Magog war of Ezekiel 38-39 will happen, perhaps quite soon, and God will save Israel rather than the Arab nations who wish to normalize relations with her. They will merely protest. The Bible says that great wars lie ahead for the Middle East, not peace.

However, there’s much good news in all this for those of us who know Jesus as our Savior. The emphasis on “peace and security” tells us that we are ever so close to the Lord fulfilling the promise of 1 Thessalonians 5:9-10, which signifies our departure from this world before the wrath of God falls on the unsuspecting world.

Note: Please consider signing up for my newsletter on the home page of my website at https://www.jonathanbrentner.com/. It will greatly help me in reaching more people. Thank you.