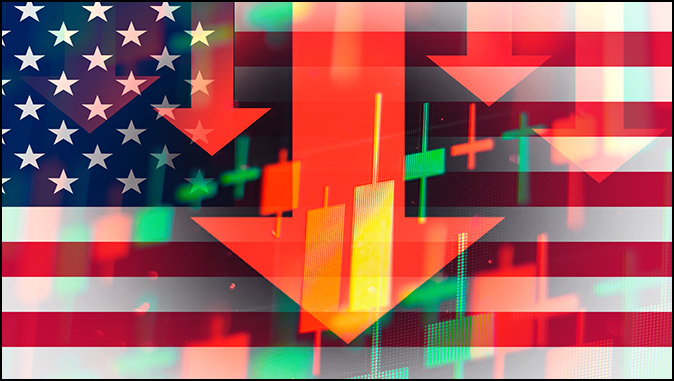 Will An Economic Pearl Harbor Destroy America?
By Britt Gillette

On December 7, 1941, Japan caught America by surprise when it attacked the U.S. naval base in Pearl Harbor in Honolulu, Hawaii. Japan sought to destroy the U.S. Pacific Fleet. Fortunately, that attack didn’t destroy the United States. But the future may not be so kind. Why? Because the U.S. is setting itself up for a modern day Pearl Harbor – one from which it will never recover. And it won’t be the result of a military strike. It will be the result of an economic one. To understand what’s coming (this attack is already underway), we need to understand our history.

In 1944, the Bretton Woods Agreement established the financial rules and monetary system governing western nations. The system required participating nations to guarantee convertibility of their currencies into U.S. dollars at a fixed rate with the dollar convertible to gold by foreign governments. This essentially put the world on a type of gold standard via the U.S. dollar.

This system served the world well until the late-1960’s, when it became clear the United States was printing dollars without the gold needed to back up those dollars. Out-of-control government spending via a host of new government social programs and the war in Vietnam threatened to deplete U.S. gold stockpiles. So on August 15, 1971, President Nixon “temporarily” closed the gold window (it’s never been reopened) – terminating the convertibility of dollars into gold. This made the dollar a fiat currency, meaning it wasn’t backed by anything of value. To prevent runaway inflation, the United States brokered a deal with Saudi Arabia which effectively set up a new world monetary system.

Following the 1973 Yom Kippur War, the United States found itself the target of an OPEC oil embargo as a result of the military aid it provided to Israel. Oil prices quadrupled. With the dollar no longer tied to gold, inflation soared as the U.S. continued to run annual budget deficits. Facing these headwinds, in 1974 the U.S. brokered a deal with Saudi Arabia to stabilize the dollar. The U.S. agreed to buy oil from Saudi Arabia and defend the kingdom militarily, while also providing military aid and equipment. In return, Saudi Arabia (and the rest of OPEC) agreed to sell oil only in U.S. dollars and use those dollars to buy U.S. debt, effectively supporting both the dollar and U.S. deficit spending.

For nearly five decades, the U.S.-Saudi relationship held up well. The United States successfully defended Saudi Arabia in Operation Desert Shield in 1990-1991, and Saudi Arabia continued to sell oil in dollars. But in recent years, the U.S.-Saudi relationship has started to fray, and over the past 18 months, it’s all but fallen apart. That means the days are numbered for what remains of the petro-dollar system.

Exactly fifty years to the day from when Nixon closed the gold window, the Taliban entered Kabul and the Afghan president fled the country. In hindsight, this event struck a fatal blow to the petro-dollar system. The petro-dollar is still alive, but it won’t last much longer. Why?

The U.S. abandoned its allies. It left Americans behind enemy lines and allowed those who assisted America to fall into the tortuous hands of the Taliban. In the face of such a betrayal, is it any surprise Saudi Arabia might begin to question U.S. commitment to its security? The U.S. showed itself to be an unreliable partner. Russia was quick to capitalize. Unnoticed by many in the western media, Russia brokered its own security deal with Saudi Arabia, undermining the petro-dollar and threatening its future.

The Russian Invasion of Ukraine

Fast forward to February 2022. Russia invaded Ukraine. In response, the U.S. and its allies imposed sanctions on Russia, froze Russian assets, and kicked Russian banks out of the international financial messaging system, SWIFT. This served as a major wake-up call to the nations of the world. Just as America’s abandonment of Afghanistan made every nation question America’s commitment to its allies, U.S. actions against Russia made the nations of the world realize what would happen if they ended up on America’s “bad list.” They now understand the risk of holding too many U.S. treasuries or of being too reliant on an international financial system dominated by the U.S. dollar. The result? These nations are now willing to explore (if not actively seek) an alternative to the dollar.

In 2006, Brazil, Russia, India, and China (the BRIC nations) held the first BRIC Summit. The goal was to increase cooperation and explore opportunities for economic growth between these growing nations. In 2010, South Africa joined, and the coalition took on the moniker BRICS. Since then, BRICS has worked to create an alternative to the SWIFT payment system as well as a commodity-backed currency to challenge the U.S. dollar. As 2022 draws to a close, a host of additional nations have expressed interest in joining the BRICS coalition. Among them are some of the most important producers of oil and natural gas – Nigeria, Iran, Argentina, Algeria, Kazakhstan, and Indonesia. The latest nation to express interest? Saudi Arabia.

The Coming Destruction of the U.S. Dollar

If BRICS creates its own commodity-backed currency as an alternative to the U.S. dollar, and all the nations expressing interest join BRICS, it will destroy the dollar. Those nations represent over 50% of the world’s population and an even larger share of the world’s commodity production. If oil starts trading in other currencies… If the dollar loses its reserve currency status… If international trade is conducted in fewer and fewer dollars – meaning demand for dollars drops while supply remains the same – then a flood of dollars will return to the United States. This will cause massive inflation, a collapse in confidence in the U.S. dollar, and major destruction throughout the American economy. Interest rates will skyrocket, and the four pillars of American wealth – stocks, bonds, dollars, and real estate – will collapse in real terms. The U.S. will no longer be the world’s financial center. Its power will erode significantly.

Then what? Once the petro-dollar ends, and the dollar experiences massive inflation or even hyperinflation, a new monetary system will have to take its place. Will it be the new BRICS currency or something else? We don’t know for sure. But in all likelihood, it will be built on blockchain. Many believe if BRICS creates a new commodity-backed currency, that currency won’t be convertible into the underlying commodity. Instead, the commodities will be pledged and anchored to the new currency via blockchain technology. Meanwhile, central banks openly discuss their plans to replace today’s national currencies with central bank digital currencies (CBDCs). Either way, a “great reset” is coming to the global financial system, and digital currencies will take over. When they do, government will wield unprecedented power. With such power, not only will government be able to track everything you buy or sell, it will be able to kick you out of the economic system – just as the Bible says.

What’s Coming to the World

When government-sponsored cryptocurrencies replace paper currencies, individual freedom and liberty will disappear. Governments will be able to “turn off” your cryptocurrency or reprogram it to determine how you can use it. For instance, if your social credit score isn’t high enough, they can reprogram the currency in your account to only work within five miles of your home or limit it to the purchase of specific “pre-approved” items. Ultimately, if you do something the government doesn’t approve of, they’ll be able to shut down your ability to buy and sell all together. The Canadian government already showed its willingness to do this when it cut off financial access to anyone who supported the Canadian trucker protest.

The Bible says this is precisely what will happen in the end times. The Antichrist will establish a global system of commerce. His system will play a part in every economic transaction on earth. It will be so dominant, no one will be able to buy or sell anything without the Antichrist’s approval (Revelation 13:17). Does this sound like something far off in the future? It’s not. It’s fast approaching. We see the foundations of the Antichrist’s economic system coming into place today. The U.S. dollar will soon lose its status as the world’s reserve currency, and the world will be one step closer to the mark of the beast system.

It’s yet another sign we live in the season of the Lord’s return. We just experienced a global pandemic (Luke 21:11). A global famine is on the horizon (Matthew 24:7). Israel is back in the land (Jeremiah 23:7-8). The Jewish people are back in Jerusalem (Luke 21:24-28). And the Gospel is being preached throughout the world (Matthew 24:14). Make no mistake. The tribulation, the Antichrist, and global government are part of the world’s immediate future. But don’t despair, this also means the return of Jesus is part of our immediate future (Revelation 22:20). And His is an everlasting kingdom (Daniel 2:44) with no more death or crying or pain (Revelation 21:4). So keep your eyes fixed on Him!