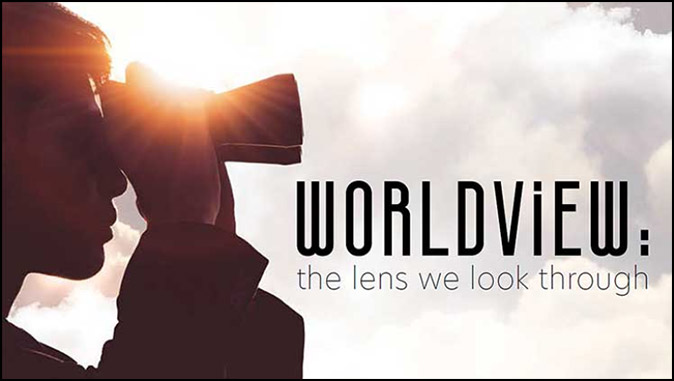 What’s in Your Worldview?
By Tim Moore

“Do not be conformed to this world, but be transformed by the renewing of your mind, so that you may prove what the will of God is, that which is good and acceptable and perfect.” – Romans 12:2

A famous advertising campaign within the past few years asked consumers, “What’s in your wallet?” The point was that if you didn’t have a particular credit card, you were being poorly served and missing out.

As our society seems bent on collective cultural delusion, it is worth asking, “What’s in your worldview?”

Perhaps I should define my term. Worldview is the lens through which we perceive everything. It offers us a framework to build our perception of reality. Traditionally, the West ascribed to a Judeo-Christian worldview. That is not to claim that every person was a Jew or committed Christian, but merely that society was built around certain common understandings, including:

1. There is an objective reality.
2. Moral law is immutable and handed down from God (rather than invented and imposed by mankind).
3. Each person is accountable to a Judge who will execute perfect justice in due time.

Our own founders adopted a Christian understanding of the depravity of man — leading to a system of checks and balances within our governmental institutions. They respected the sovereignty of God and trusted that He will act as the ultimate judge.

“Our Constitution was made only for a moral and religious people. It is wholly inadequate to the government of any other.” – John Adams

Without negating the role of other influences, there can be no denying the impact of such a Judeo-Christian worldview. Western civilizations thrived — elevating the value of human life, prizing the importance of human ingenuity, and realizing the greatest and most widespread prosperity in the history of the world. All this was possible because western societies collectively understood that God reigns above the affairs of men — and we shall all answer to Him in the end.

Is this to say that Western civilization is beyond criticism? Not at all. In fact, our willingness to engage in self-examination and introspection has been one of the strengths of our system. But something has changed in recent years.

The Times, They Are A’ Changin’

Springing forth from university campuses, first in Europe and now throughout the western world, “higher criticism” has infected every segment of society. Simply put, higher criticism has challenged not only the truth claims that have been handed down for generations, but also the very idea that there is an objective Truth. Oprah captures the malleable relativism of this new ideology when she speaks of “your truth” vs. “my truth” — as if truth is so transitory that it shifts from person to person. Vice-President Kamala Harris has clearly succumbed to this vacuous morality.

Jewish philosopher and scholar Dennis Prager affirms the danger of the path we are on:

“If America abandons its Judeo-Christian values basis and the central role of the Jewish and Christian Bibles, its founders’ guiding test, we are all in big trouble, including, most especially, America’s non-Christians. Just as the Jews of secular Europe.” (Dennis Prager, “America founded to be free, not secular,” Townhall.com, January 3, 2007.)

One example of the peril we are encountering regards a single word. At one time, Western thinkers recognized seven “deadly sins”: pride, greed, wrath, envy, lust, gluttony, and sloth. It would be instructive to explore every one of those in turn. Without question, each one applies to our current cultural moment. But one has always been considered the deadliest of them all.

No less an authoritative source than Wikipedia calls pride “the original and most serious of the seven deadly sins” because it is “the most demonic out of them…[and] thought to be the source of the other capital sins.” The source for that insight is cited as John Climacus — also known as “John of the Ladder” — a 7th-century Christian monk who lived on Mount Sinai.

The corrupting influence of pride is evident in the downfall of Lucifer. Enamored with his own beauty and convinced that he was worthy of praise instead of God, Satan sought to be exalted in heaven. Tellingly, he did not want to embrace God’s holiness or righteousness or grace — just God’s high and lifted-up status. Because of his rebellion against the Almighty, Satan was cast out of heaven. Scripture is clear that “pride goeth before a fall” (Proverbs 16:18).

And yet, pride is the emotion that swells our hearts as Americans. In the late 1980s, Conservative American patriots pushed Lee Greenwood’s song Proud to Be an American to the top of the charts. I am not criticizing Greenwood’s song per se; its call for unity and mutual respect would be a welcome balm for our national mood today. But our sense of arrogance and pride has led to grave errors in our society.

Every June, America now celebrates “Pride Month.” This in-your-face affirmation of LGBTQI+ (Lesbian, Gay, Bisexual, Transgender, Queer, and Intersex “plus”) lifestyles permeates our airwaves. Lest you didn’t realize that the acronym had gained other letters, that was the official White House Pride Month acronym. We can rest assured that other letters will continue to be added as new identities are discovered.

When Did We Go Off the Rails?

Few people today would deny that something is terribly amiss in our land. As David Reagan has documented, the challenges faced by public school teachers 70 years ago pale in comparison to the horrors they experience today. Instead of gum-chewing, noise-making, and line-cutting, they now must deal with drug abuse, suicide, rape, and assault. On the flip side, whereas students were once taught to respect the ideals of truth, justice, and the American way, our system of education now holds our own society and its founding principles in great disdain.

I would submit that the problem is captured in one of my favorite Proverbs: “Where there is no vision, the people are unrestrained” (29:18). This statement applies within any organization or society. Unless there is a common understanding of purpose — an agreed-upon vision — there is no unity of effort or purpose. But, in another sense, when a people cannot even agree on a set of principles, society will inevitably run amok.

Certainly, if Thomas Jefferson were alive today, there is no way our current Congress would agree to embrace the phrase, “We hold these truths to be self-evident…” Some would argue against any truth being self-evident, while others would challenge, “Whose truth?”, while others still would deny the validity of knowable truth whatsoever.

We believe America really began going off the rails in the 1960s — in the midst of the sexual and cultural revolution. But signs of demise were already evident long before that. In the midst of World War 2, Peter Marshall preached a sermon entitled “Trial by Fire,” in which he decried America’s rising materialism and abandonment of God.

Certainly, we have never lived up to our own lofty ideals. But, there was a time when we at least aspired to serve as a city on a hill — a beacon of truth and freedom. Today, many within our own country exhibit a loathing for those very goals. Given over to lusts, degrading passions, and depraved minds (as described in Romans 1:18-32), “they are no longer able to discern truth.”

Where Else Can We Go?

Which leaves us with the same question I posed at the beginning of this article: “What’s in your worldview?”

As you ponder your answer, consider the stark but honest response Jesus’ disciples gave when He asked if they wanted to abandon Him as so many were doing. Peter responded, “Lord, to whom shall we go? You have words of eternal life. We have believed and have come to know that You are the Holy One of God” (John 6:68-69).

Do you believe that? Does your confidence in Jesus Christ and trust in His Word inform all of your beliefs, all of your actions, and all of your attitudes? If you can honestly say that is so, then you have a Christ-centered worldview.