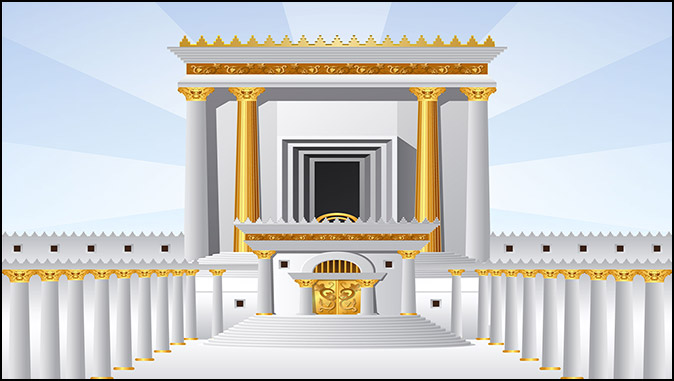 The believer’s pathways toward the future are illuminated through the prophetic Word of God. Many specific signs are posted along those pathways. God’s prophets — of whom Jesus, the Son of God, the Second Person of the Godhead, is greatest — foretells things to come with unerring clarity.

The Third Temple, the subject of this commentary, is one such prophetic sign. That Jewish house of worship is prophetically scheduled to be constructed atop the most volatile piece of real estate on the planet. That rocky plot of earth is feared by world diplomats to present the greatest threat to Mideast and world peace.

Mount Moriah, known as the Temple Mount, is a focal point for adherents of the world’s three most prominent religions: Judaism, Christianity, and Islam. Only worshippers within Islam, at present, are allowed to worship upon this promontory at the southern area of Jerusalem. Merely the hint of the other religions’ attempts to conduct worship atop Moriah is met with violence from Muslim militants. It seems inconceivable that a Jewish house of worship can ever be built there.

Yet, there is more than a concept—the matter of wanting to build a Jewish Temple on Moriah. In the thinking of some, it is as good as already done. That’s because the God of Heaven has declared that it will be built. His prophetic Word never fails to produce fulfillment. The nation in the midst of which Moriah sits is absolute proof in the thinking of those who believe the Third Temple is as good as already placed there.

Modern Israel is a miracle entity, guided by the very hand of God through more than 1900 years of dispersion. The Jewish people endured enemies and persecutions of every description while being brought to return and reestablish their nation on the very ground where ancient Israel surrounded the Temple Mount.

This fact is proof that God’s Word is truth. Bible prophecy foretold that Israel would be punished as a nation and removed completely from the land God promised Abraham, Isaac, and Jacob.

We remember that Jesus told His disciples while they sat on the Mount of Olives that not one stone of the Temple would be left upon another. This dismantling took place in AD 70 when the Romans, under General Titus and his father, Emperor Vespasian, destroyed the Jewish Temple. The people were scattered throughout the known world and, as prophesied, were brought back into their own land and reestablished as a nation on May 14, 1948.

Jesus also prophesied that someday there would be a Temple sitting on Moriah and that the deceptive man of sin the Jews would accept — rather than Jesus Christ, their True Messiah — would sit in that Temple and declare himself to be God and demand worship. This would be right in the middle of the last seven years of human history before Christ will return at Armageddon. We call this horrendous time, of course, the Tribulation.

With all of the other signals that point to that time shaping up for fulfillment, the Temple in which Antichrist will sit must be somewhere upon the end-times horizon.

Those who visit Jerusalem can go to the Temple Institute near Moriah and view all of the implements for Temple worship that are already prepared for such worship to begin. It’s more than rumor, we believe, that a Third Temple sits in modular form somewhere nearby and can be quickly assembled, once the go-ahead is given to place the Jewish Temple on the Temple Mount.

And most recently we see the reason for this commentary’s title.

Certain cleansing rituals must take place for the sacrificial system demanded by Torah. This involves the burnt ashes of a perfect red heifer, which are to be mixed with water to do the cleansing practices.

There have been searches over the years for the “perfect” such red heifer. We remember a number of years ago those responsible for the search thought they had found such an animal. Her name was Melody, as I recall. But hairs colored other than red were found, and the search went on.

Now they believe they’ve found five candidates for the red-heifer ritual cleansing requirements. The following, although the Hebrew language can’t be understood by most, I realize, gives information about the red heifer matter.

“The Temple Institute launched its Red Heifer program about a decade ago, led by Rabbi Azariah Ariel. But even in Temple times, an animal that fulfilled the Biblical requirements was exceedingly rare. Failing to produce a suitable candidate from ranchers in Israel, The Temple Institute began investigating alternative sources for a red heifer.

“Boneh Israel, an organization that connects Christian lovers of Israel to the Holy Land, stepped in to help. Led by Byron Stinson, a native Texan, Boneh Israel understood ranchers.

“‘I didn’t set out to do this, but right now, I am probably the best red heifer hunter in Texas,’ Byron quipped. ‘The Bible says to bring a red cow to purify Israel, and I may not understand it, but I am just doing what the Bible said.’”

“‘The prophecies came true, and the Jews are back in Israel,’ Byron said. ‘Now they need to build a Temple. But it’s like buying a really nice car. If you don’t have the key, you aren’t going anywhere. The red heifer is the key to making the Temple work like it’s supposed to.’”

The cows [Byron found and acquired] were between 5–8 months old. To be suitable for the red heifer ceremony, the cow must be two years and one day old so these heifers will be raised in Israel until they reach the proper age.

Chanan pointed out that last year was 5781 in the Hebrew calendar.

Sadly, all this is preparation for what Jesus called the worst time in all of human history. The prophetic clock is ticking swiftly toward that time of unimaginable horror.

But those who know Christ are promised to be kept out of that time (Revelation 3: 10). Here, again, is how to be assured that you are in God’s family and kept from the time of Tribulation.