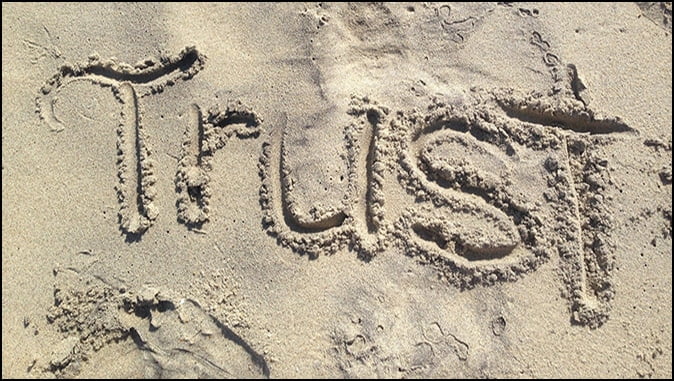 Tough Faith in a Time of Anxiety
By Col. Tim Moore

There’s an old saying that contains sage wisdom: “When you find yourself in a hole, stop digging!”

Over the last several weeks, our nation has been pushed into a hole. After riding an economic boom for the past few years, we suddenly find ourselves facing a public health crisis, potential economic calamity, and an uncertain future. How should Christians react to a barrage of negative news and mounting fears?

First of all, we should constantly remind ourselves — and our fellow believers — that our hope is not in our checking account, our 401K, our stockpile of food and necessities, or any other external person or thing. Our hope is in Christ alone.

Standing firmly on that Rock of Truth, we need to speak truth — to each other and to a world staggering in fear.

When we speak of the wrath of God, the world takes offense. They envision God as a monster who pours out unmerited judgment without mercy.

I was reminded of this recently when Kentucky State Representative Chris Fugate (who is also a Baptist pastor) opened a daily session of the legislature with a prayer in which he spoke of God’s judgment against sin and our need to repent for individual and corporate sins. Leftist legislators in Kentucky were outraged that anyone would speak of judgment or call for repentance.

But Scripture is clear. The Apostle Paul stated that the true and living God will not forever tolerate sin — and He will not be mocked (Galatians 6:7-8). But even in the midst of wrath He always remembers mercy (Habakkuk 3:2). And, He is patient, not wishing any to perish but for all to come to repentance (2 Peter 3:9).

That patience and mercy is evident throughout the Bible. When God announced judgment on a world filled with wickedness in the form of a global flood, He commissioned Noah as a preacher of righteousness (2 Peter 2:5). While he was building the ark, Noah was calling people to repentance — through both his obedient actions and his preaching.

Jonah came to understand the depth of God’s love for lost people. God sent him to preach repentance to wicked Nineveh. They understood the precariousness of their situation and repented in sackcloth and ashes — and God relented of His judgment.

A Proper Response to Judgment

Jesus challenged the misguided thinking of the men who raised a question about Pilate’s slaughter of some Galileans (Luke 13:1). He asked, “Do you suppose that these Galileans were greater sinners than all other Galileans because they suffered this fate?” (Luke 13:2). Instead of belittling the tragedy or singling out those people’s sinfulness, He spoke to the condition of all mankind: “Unless you repent, you will all likewise perish” (Luke 13:3).

So, following the example of Noah and Jonah and Paul and Jesus, we need to speak truth to those who are perishing — calling them to repentance and salvation in Jesus. This is no time to offer platitudes of empty hope. As the storm rages, we must point to the Church’s one foundation: Jesus Christ, her Lord.

Like the word of the cross, such a message will continue to be offensive foolishness to many of those who are perishing, but to others it will represent the power of God (1 Corinthians 1:18).

Even when we know the truth, it is easy for our human emotions to betray us in times such as this. Watching the news and seeing others react so fearfully can lead us to feelings of despair. If you find that true for yourself, realize that many of our biblical heroes also experienced moments of anguish as they lived through trying times.

Habakkuk prayed for a little judgment to serve as a wake-up call to his evil generation. He was dismayed when God revealed the overwhelming calamity that was about to befall Israel at the hands of the Babylonians. Habakkuk asked, “How can You punish those who are evil with those who are more evil?” God did not answer that question. Instead, He declared, “the righteous shall live by his faith” (Habakkuk 2:4). This is an admonition that is repeated three times in the New Testament (Romans 1:17, Galatians 3:11 and Hebrews 10:38).

David also experienced moments of anxiety and isolation. Psalm 22 captures his cry of anguish, opening, “My God, my God, why have You forsaken me?” Jesus recited this tragic Psalm as He hung on Calvary’s cross, communicating the emotional depth of His agony. But halfway through that Psalm, David sounded this hopeful note: “But You, O LORD, be not far off” (Psalm 22:19). He then recounted the blessed assurance of his security in God alone and concludes with the prophetic vision of faithful generations to come: “They will come and will declare His righteousness to a people who will be born, that He has performed it” (Psalm 22:31). Jesus concluded His recitation of this Psalm by proclaiming, “It is finished” (John 19:30).

Job also experienced a series of calamities. He lost his children, his wealth and his health. Bowing under such great pain, “Job opened his mouth and cursed the day of his own birth” (Job 3:1). Yet, in the midst of such tragedy and hopelessness, Job’s great faith rallied and he declared (Job 19:25-27):

25) As for me, I know that my Redeemer lives, and at the last He will take His stand on the earth.
26) Even after my skin is destroyed, yet from my flesh I shall see God;
27) Whom I myself shall behold, and whom my eyes shall see and not another…

Perhaps the most heartbreaking record of national tragedy is Jeremiah’s account of Judah’s downfall. The nation’s sin was so great that God commanded Jeremiah not to pray for them (Jeremiah 7:16 and 11:14).

After Jerusalem was destroyed by the Babylonians, Jeremiah walked through its ruins, recounting the horrible affliction the people had suffered during the siege, to the point of cannibalism. The prophet’s grief and despair were overwhelming. He wrote, “For these things I weep, my eyes run down with water… my children are desolate because the enemy has prevailed” (Lamentations 1:16).

But Jeremiah refused to wallow in despair. As an act of will, he began expressing his tough faith in God (Lamentations 3:21- 24):

21) This I recall to my mind, therefore I have hope.
22) The LORD’s lovingkindnesses indeed never cease, for His compassions never fail.
23) They are new every morning; great is Your faithfulness.
24) The LORD is my portion,” says my soul, “therefore I have hope in Him.”

Jeremiah also testified that the salvation of the LORD is promised to those who wait for Him and seek Him (Lamentations 3:25). We can rejoice that the promise of salvation that the prophet anticipated has come!

The Bible is filled with other examples of men and women of faith living through tragic circumstances. Ruth chose hope over despair when she pledged herself to the God of Israel (Ruth 1:16). Unjustly imprisoned, Paul and Silas prayed and sang hymns of praise to God (Acts 16:25). Their testimony of hope and faith led to their jailer’s conversion when they were miraculously freed from their chains.

All of these exemplars are lauded in Scripture because they did not lose heart in the midst of discouragement. The Bible does not minimize the tragedy of their circumstances or the honesty of their emotions; but it does record their tough faith. Do you manifest that kind of faith?

An Admonition for Believers Only

In Psalm 73, Asaph recorded with great honesty the sentiment he felt in a moment of discouragement. Witnessing the prosperity of the wicked and the temporal suffering of the righteous, his sense of justice was offended. As we witness people afflicted by an invisible contagion, our human tendency toward fear and anxiety mounts. It is tempting to express dismay instead of exhibiting Christian peace.

Asaph showed godly wisdom. He realized that if he had given voice to his concerns, he would have “betrayed the generation of Your children. When I pondered to understand this, it was troublesome in my sight” (Psalm 73:15-16). Demonstrating tough faith, he refused to allow his emotions to get the best of him — or cause others to stumble.

Despair is more infectious than COVID-19. When seasoned believers exhibit fear or anxiety, they undermine the tender faith of those who are younger in age or in the Lord. Some folks think they’re old enough to say anything they want; the truth is that we must be wise enough to know better.

Let me encourage every believer reading this article to manifest the wisdom of Asaph. Resolve to resist the enemy’s temptation to give in to fear or anxiety. Refuse to give voice to despair. Do not allow your emotions to override your faith. Instead, go into your prayer closet and practice Paul’s admonition in Philippians 4:

6) Be anxious for nothing, but in everything by prayer and supplication with thanksgiving let your requests be made known to God.
7) And the peace of God, which surpasses all comprehension, will guard your hearts and your minds in Christ Jesus.

The current crisis demonstrates in real time that those who have cast themselves adrift from biblical truth are tossed about in every storm. When gale-force winds blow, they risk being blown to destruction. Only those who have anchored themselves in Jesus will stand firm.

Our society has certainly devolved. Franklin Roosevelt once reassured America with the hopeful statement, “We have nothing to fear, but fear itself.” Now, many pundits and politicians proclaim the hopelessness of our economy, our society, and our future. On the other extreme, wishful pollyannas suggest that we merely hope in hope — as if rose-colored glasses will solve the challenges we face.

Christian hope is not built on such gossamer strands of nothingness. Jesus is our Blessed Hope. And we can hope in the promises of God in spite of our circumstances (2 Corinthians 1:20 and Hebrews 10:23).

Pastor Alistair Begg once shared the account of a camping trip he took as a young boy in Scotland. During a daytime hike, a mighty storm arose. Returning to their camp that evening, his troop found many of their tents blown away — some lost forever over a nearby cliff. Lying in his own tent that evening, Begg recalls thinking, “I’m glad this tent is not my permanent home. And, I’m glad I drove my tent stakes into solid ground.” How true.

We can be thankful that this world is not our permanent home. Jesus is even now preparing a place for us, a place where we will live in His presence forever. Until then, we can be thankful that our temporary tent stakes are driven into the Rock — secure even when the winds blow and the storms rage. In the words of David, “He alone is my rock and my salvation, my stronghold; I will never be shaken” (Psalm 62:2).

Jim Farr of Longview, Texas, recently pointed out that the reality we’re experiencing firsthand offers us a preview of what is to come — as well as assurance of what to expect soon and very soon. In the words of Gloria and Bill Gaither’s great song “The King is Coming:”

The marketplace is empty, no more traffic on the streets;
All the builders’ tools are silent, no more time to harvest wheat;
Busy housewives cease their labors, in the courtroom no debate;
Work on earth is all suspended, as the King comes through the gate.
O the King is coming, the King is coming.

He certainly is! With that in mind, receive this prayer Paul wrote to the believers in Rome: “Now may the God of hope fill you with all joy and peace in believing, so that you will abound in hope by the power of the Holy Spirit” (Romans 15:13).

The Greatest Mystery of Bible Prophecy (Part 3 of 4)

The Greatest Mystery of Bible Prophecy (Part 3 of 4) By Dr. David Reagan Unusual…

Qatar and the Antichrist’s False Peace

Revival Versus Revolution (Part 2 of 4)

Revival Versus Revolution (Part 2 of 4) By Dr. David Reagan Application to America Now…

O Jerusalem Israel - Middle East By J.L. Robb A year after I was born,…