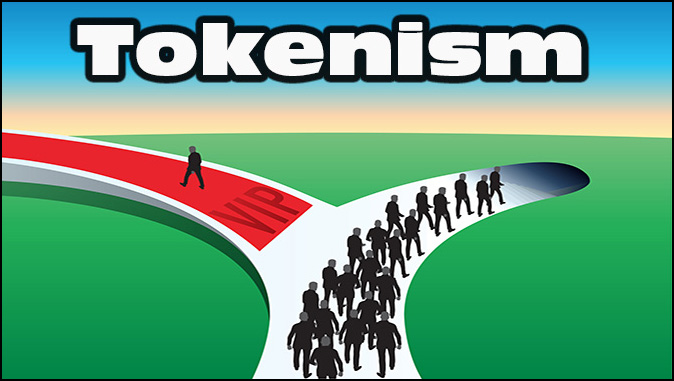 Tokenism: The practice of making only a perfunctory or symbolic effort to do a particular thing, especially by recruiting a small number of people from underrepresented groups in order to give the appearance of sexual or racial equality.

When the Biden Administration took over from the Trump administration, dozens of African Americans were hired. A year and a half later, 21 of them quit their jobs because they were never given anything to do. They were token employees whose only job was to sit there and be black.

In most career fields, a company or organization will seek out people who are best qualified for a job. Time and time again, Biden has publicly stated he is going to hire a woman or minority for a position. If you are a white male and very qualified for a job, you are more likely to be passed over by someone who is less skilled than you.

President Biden nominated Judge Ketanji Brown Jackson to become the 116th Associate Justice of the United States Supreme Court because he said he was going to select a black woman. Jackson was a bit shaky as she spoke before the Senate. Since it was a race and gender matter, the Senate had no real options in judging if she was actually qualified for the job. Their duty was to vote for another token milestone.

Pete Buttigieg was likely selected to be Secretary of Transportation because he is a homosexual. My problem with him is that he chose to take 12 weeks of paid parental leave right in the middle of a crippling supply-chain crisis. Cabinet secretaries do not qualify for paid parental leave. President Biden allowed Buttigieg to take time off obviously because it was the politically correct thing to do.

We now have a new press secretary at the White House. Karine Jean-Pierre clearly got the job because of tokenism. She is black, an immigrant, and a lesbian. Karine has very poor communication skills. When speaking to the press about her own bio, she read from a card. When the press asks her questions, she turns to pre-selected statements that often barely match the question.

The strangest moment in Jean-Pierre’s tenure came when the boy band BTS appeared at the podium with her. Only one member of the band spoke English, and he said, “Hi, we’re BTS, and it is a great honor to be invited to the White House today to discuss the important issues of anti-Asian hate crimes, Asian inclusion and diversity.”

I think it’s incredibly insulting to Asian-Americans to have a boy band represent the issue of hate crime. Ten years from now, the vast majority of people won’t even know who BTS was. If anti-Asian hate crimes are resolved, it won’t be because of the 2022 BTS/White House summit.

It’s too bad Jeffrey Dahmer was killed by one of his cellmates. He would make a great member of the Biden administration. Joe could give Jeffery a presidential pardon and appoint him to a cabinet position. He would be the first gay serial killer and cannibal in history.

Consumer price inflation is currently at 8.3% — the metric’s highest level in four decades. Gas prices are soaring past $4.75 per gallon — with no end in sight. Yet Treasury Secretary Janet Yellen found time to raise the rainbow flag.

“For the first time in our history, Treasury is displaying the Pride Flag to express our solidarity with LGBTQ+ Americans during Pride Month,” Yellen announced last week, adding that her department “remains committed to diversity, equity, and equal opportunity for all.”

There is nothing positive about diversity. Many people claim that America’s racial diversity makes our nation great. We fault a civil war over race. America is great despite its racial diversity. The Indian subcontinent has all types of religious diversity, and millions of people have died from wars over religion.

Tokenism really shows that our leaders don’t care at all about the difference that divides us. To have the President putting people into various offices based on their sexuality, race or gender shows that he doesn’t think they are capable of achieving ranks based on their own skills. Once white males realize that they are being unfairly discriminated against by tokenism, they will rebel, and we’re back to the days of Jim Crow.

One of the glorious things about heaven is that there is no diversity. We will all be primarily seen as children of God.

“After this I looked, and behold, a great multitude that no one could number, from every nation, from all tribes and peoples and languages, standing before the throne and before the Lamb, clothed in white robes, with palm branches in their hands, and crying out with a loud voice, ‘Salvation belongs to our God who sits on the throne, and to the Lamb!’” – (Revelation 7:9-10 ESV).