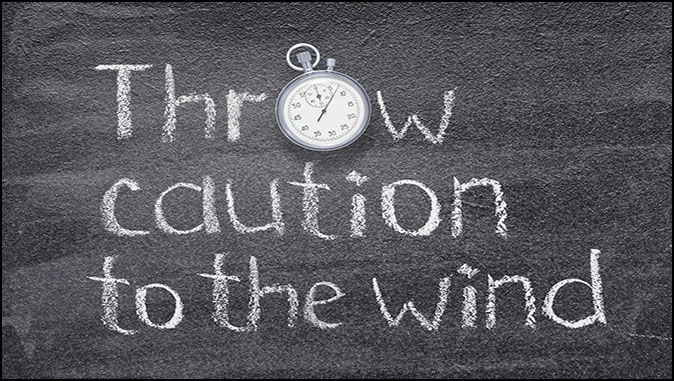 Throwing Caution to the Wind
By Todd Strandberg

I’ve been pro-vaccination for the past year because I fear other consequences more than the virus itself. We should have collectively decided to vaccinate enough people to reach herd immunity and stop the pandemic.

This virus has devastated our ICU workers. It gave the government an excuse to take away more of our freedoms. Millions of businesses have been destroyed, and we have spent trillions on the virus. We should send China a $5 trillion dollar bill.

It seems that about 40% of the population lacked trust in the government, which allowed the Delta variant to thrive. In black populations, mistrust is even higher. In many southern states, 70% of blacks have resisted getting any of the vaccines.

It did pay to wait as long as possible to get vaccinated. People who got jabbed in January now only have 45% protection, which is down from the initial 95% protection rate.

In an article I wrote a couple of months ago, I expressed my concerns over booster shots, mixing vaccines, and giving the vaccine to small children. The government plowed ahead in all these areas in what appears to be a lack of research.

The government is currently recommending that people over age 65 with health issues get the Pfizer booster shot. If it is true that the booster shot is simply half a dose of the previous two doses, then it would seem fine. I worry about the health consequences of getting endless booster shots. I’m most worried about booster shots that get modified to make them more effective, and the public is not told of the change.

I was very troubled by the C.D.C. Director, Rochelle Walensky, overruling the vote by an agency panel that did not recommend Pfizer boosters for health care workers, teachers, and other workers at risk. The press didn’t even ask for a reason for why the panel voted no.

My concern about mixing vaccines has come true. A small group of people who had the Moderna and Johnson & Johnson vaccines have been given the Pfizer booster. This move is being seen as safe because it boosted antibody levels.

They’re now giving the vaccines to children down to the age of five years old. They think all is well because they figured out that you give children 1/3 the dose. In the past, it took us 10 years to develop vaccines, and we’re making moves in just a few months. Since children are in a state of development, there are a million things that can go wrong.

I now have a new concern with the introduction of the drug molnupiravir, which comes in pill form. As it turns out, all the scientists and doctors who insisted that Merck’s “revolutionary” COVID drug molnupiravir is extremely safe weren’t faithfully adhering to “the science” after all. Because according to a report published by Barron’s, some scientists are worried that the drug – which purportedly cut hospitalizations in half during a study that was cut short – could cause cancer or birth defects.

So much for having a “strong safety profile,” as Dr. Scott Gottlieb claimed in an interview on the day Merck first publicized the research.

It’s perfectly understandable why Merck might choose to play down this safety risk: assuming it’s approved, the drug is widely expected to be one of “the most lucrative drugs ever” – which is one reason why Merck’s shares soared into the double-digit territory after the announcement. The market for this type of drug is estimated to be over $20 billion.

I’m troubled just by the dosage of Molnupiravir. The treatment requires people to take five pills four times a day for up to two weeks. I’ve been prescribed all types of drugs over the years, and I’ve never taken more than two of one kind. To be downing 20 pills in a single day strikes me as very dangerous.

I don’t expect something to go horribly wrong with the COVID-19 vaccine. I’ve shown that the dangers are there, but I doubt calamity will occur. If we had a disaster with one of the vaccines, it would make it very hard to get people to receive the mark of the beast. Our ability to throw caution to the wind without consequences tells me that time will likely run out before our luck does.

“And the third angel followed them, saying with a loud voice, If any man worship the beast and his image, and receive his mark in his forehead, or in his hand, The same shall drink of the wine of the wrath of God, which is poured out without mixture into the cup of his indignation; and he shall be tormented with fire and brimstone in the presence of the holy angels, and in the presence of the Lamb” – (Revelation 14:9-10).

China and Russia Race Ahead of America