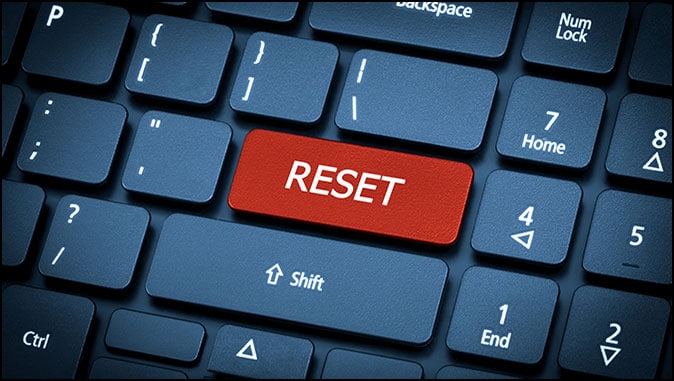 Thoughts on “Reset”
By Terry James

Sense of an impending something-or-the-other is palpable. That is, something big is up, and is building toward something else that’s monumental.

Never, as I’ve said before, have we experienced what we’re experiencing now in this nation–and in this world.

There is a great dividing of people on one side or the other, politically and in many other ways. Things, some say, have changed forever with the COVID-19 imposition upon this generation. And, it is indeed an “imposition” in my view, and, I believe, in the view of the Sovereign God of Heaven.

The pandemic came from out of nowhere to shut down practically every industrialized nation in every way imaginable. The imposition afflicted all—from the youngest (students who were no longer allowed to attend school) to the oldest (who were told not to venture outside our homes if we didn’t want to die). The great coronavirus imposition was thrust upon America and other nations, and was done so by a conglomerate governmental and media (national and international) cabal that told us we would shut down, wear masks, and no longer associate with one another in close proximity. Some restrictions have been mandated by threat of incarceration and fines.

To the keen observer—and I believe even by the obtuse who are willingly ignorant—it has become obvious that the whole thing has been to bring down a president who opposes the internationalist ring of wickedness in high places—the globalists-elite who are determined to bring on a changed world order.

And this is where we think a bit on the so-called reset that we’re beginning to hear more and more about in these days surrounding the tumultuous 2020 election process.

I find as absolutely valid the letter with which many readers of this article will no doubt be familiar. It was written to President Donald J. Trump by a Catholic archbishop.

Rarely do I agree with anything of a Catholic nature, but this involves things of geopolitical importance more than with theological viewpoint. This gentleman is right on the money so far as I’m concerned in his definition and analysis of everything surrounding what is happening while the globalist minions, both human and demonic, strive to bring about another Babel—a global order that is contrary to the God of Heaven in every way possible.

I will use his definition of this “reset” as put forth in his letter to our president. Forgive the length of the excerpt, but I think it necessary to explain.

A global plan called the Great Reset is underway. Its architect is a global élite that wants to subdue all of humanity, imposing coercive measures with which to drastically limit individual freedoms and those of entire populations. In several nations this plan has already been approved and financed; in others it is still in an early stage. Behind the world leaders who are the accomplices and executors of this infernal project, there are unscrupulous characters who finance the World Economic Forum and Event 201, promoting their agenda.

The purpose of the Great Reset is the imposition of a health dictatorship aiming at the imposition of liberticidal measures, hidden behind tempting promises of ensuring a universal income and cancelling individual debt. The price of these concessions from the International Monetary Fund will be the renunciation of private property and adherence to a program of vaccination against Covid-19 and Covid-21 promoted by Bill Gates with the collaboration of the main pharmaceutical groups. Beyond the enormous economic interests that motivate the promoters of the Great Reset, the imposition of the vaccination will be accompanied by the requirement of a health passport and a digital ID, with the consequent contact tracing of the population of the entire world. Those who do not accept these measures will be confined in detention camps or placed under house arrest, and all their assets will be confiscated…

For this purpose, further lockdowns are planned, which will be officially justified by a supposed second and third wave of the pandemic. You are well aware of the means that have been deployed to sow panic and legitimize draconian limitations on individual liberties, artfully provoking a world-wide economic crisis. In the intentions of its architects, this crisis will serve to make the recourse of nations to the Great Reset irreversible, thereby giving the final blow to a world whose existence and very memory they want to completely cancel. (Carlo Maria Vigano, Archbishop of Ulpiana, Open letter to the President of the United States Donald J. Trump, Sunday October 25, 2020)

The letter writer has framed very well the reset, which I believe is a blueprint by Satan himself. I believe they (the minions, both human and demonic) are doing their dead-level best to implement this hellish plan the moment this presidential election is determined.

And that’s the rub for them. The presidential election is yet unsettled. It is obvious that the Lord is still in the business of restraining evil and unbridled lawlessness (2 Thessalonians chapter 2).

The prayers of His saints are a major part of that restraint.

The satanic plan will at some point be implemented, and it will eventuate in the rise of Antichrist—but not as long as those who constitute the Church of Jesus Christ remain part of this nation and world.

The Rapture of all who belong to Christ will be the greatest “Reset” possible, bringing in the Day of the LORD and the Tribulation, followed by Christ’s triumphant return.

“And I saw heaven opened, and behold a white horse; and he that sat upon him was called Faithful and True, and in righteousness he doth judge and make war. His eyes were as a flame of fire, and on his head were many crowns; and he had a name written, that no man knew, but he himself. And he was clothed with a vesture dipped in blood: and his name is called The Word of God. And the armies which were in heaven followed him upon white horses, clothed in fine linen, white and clean.” (Revelaiton 19:11–14)