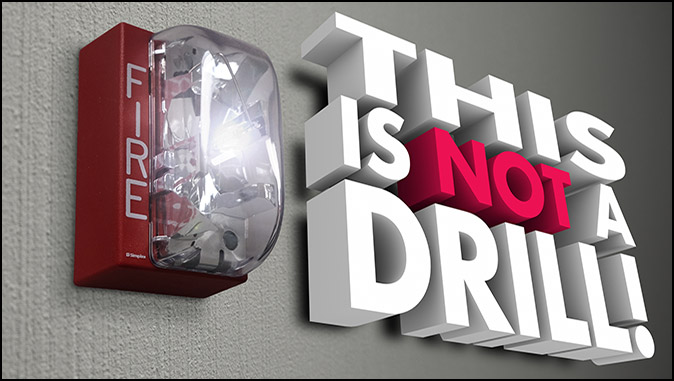 This is Not a Drill
By Hal Lindsey

Critics of end-time Bible prophecy often say exactly what the Bible said they would say. 2 Peter 3:3-4 (NASB) says, “In the last days mockers will come with their mocking, following after their own lusts, and saying, ‘Where is the promise of His coming? For ever since the fathers fell asleep, all continues just as it was from the beginning of creation.’”

Wars and rumors of war? Nothing new there, they say. Famines? They were worse in the past. Plagues and pandemics? We had a bad one for a couple of years, but the world has had worse. Lawlessness? Humanity has always had its crooks and creeps. Deception? People started lying right after they started talking. So, what’s new? What’s different?

Those samples of end-time signs all come from the words of Jesus in Matthew 24. There are lots of others, but let’s look briefly at these and see what makes them different today.

Wars and rumors of war. — Before each of the first two World Wars, everyone saw the terrible possibilities. But almost no one really thought it would happen. They thought cooler heads would prevail. But cool heads did not prevail. Pride prevailed. Greed prevailed. Hate prevailed.

It’s happening again, but this time with the added threat of nuclear weapons. As before, no one believes it will really happen. But the signs are there. War threatens every part of the earth, especially Europe. In Ukraine, Russian arrogance has been shattered. Their president, Vladimir Putin, is as proud and as careless with human life as Hitler or Mussolini. And right now, he’s like a wounded animal…with nukes.

That is just one factor that has turned planet earth into a tinderbox. Another would be severe shortages, especially of oil. This is a classic and historic cause of war. And we’re on the verge of shortages not seen since the last World War.

Famine. — This summer, UN Secretary-General Antonio Guterres said that present food shortages could trigger a global “catastrophe.” The soaring cost of fertilizer, the war in Ukraine, drought, and many other issues, have placed earth on the brink of major famines — maybe sooner than you think and in places you never thought famine was possible.

Pandemics and plagues. — The Covid pandemic still rages, and others threaten. Technology has made our generation more vulnerability to disease, not less. Several biological threats lurk on the fringes of civilization right now — many of them manmade. Also, superbugs are still on the rise, and we have no known solution to the crises they threaten.

There are other kinds of plagues as well. For instance, computer viruses carry the threat of cutting off essential water, electricity, food, and health care to entire regions.

Lawlessness. — Still another kind of pandemic was recently pointed out by scientists at the University of California San Diego School of Medicine. They reported that 18% of Californians — one in six — experienced physical or sexual violence in the past year. That doesn’t include theft or vandalism or fraud or any number of other crimes. This number only reflects violent crime, and it’s getting worse. Principal investigator Anita Raj said, “Californians are experiencing violence at epidemic proportions.” California is just one example. The epidemic of lawlessness knows no regional or national boundaries. It is global in scope.

Deception. — Fake news is not new. But it has never before been possible on the scale we see today. A global media outlet is built into every new phone. This explosion of media means opportunities for mass deception like no one even dreamed of before this century.

These are just a few of the signs Jesus pointed out in Matthew 24. And that’s just one chapter of the Bible. What’s unique about today is that all the hundreds of biblical end-time signs are converging and intensifying. The 1918 flu killed a higher percentage of people than Covid-19, but the modern nation of Israel did not exist then. Geopolitical alliances predicted in the Bible were not forming at every turn. Satanism was not exploding in popularity and influence. The 1918 pandemic was not accompanied by a rise of technology perfectly fitted to Antichrist and the mark of the beast.

The signs are all coming together right now. Keep your eyes on Jesus. Take care of your business, but do not let the cares of this world distract you from Him. Look up. Maranatha! Jesus is coming soon!