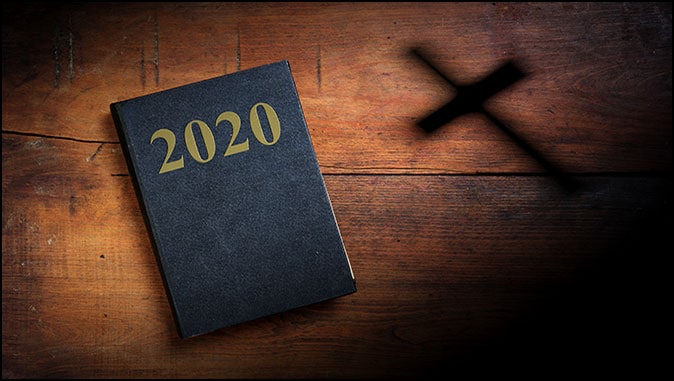 The Top Ten Bible Prophecy Stories of 2020
By Jan Markell

1) The Decline of America. There is really no end-time power in the Bible other than a Revived Roman Empire from which the Antichrist will headquarter. Thus, prophecy watchers have always known America must decline. This year we have watched capitalism come under attack and socialism and globalism be heralded. Some progressive but deluded political leaders are even hailing Marxism, including many on the Biden team.

2) The Rise of Lawlessness, Anarchy and Spirit of Antichrist. We see unbridled lawlessness in Matthew 24 and parts of Revelation, although the context of both is the Tribulation. So once again, we see Tribulation events casting a long shadow on the Church Age. Here in America, literally “all hell is breaking loose” and our Republic and rule of law are disintegrating right before our eyes! At the root of this is the spirit of the Antichrist.

3) Peace Efforts in the Middle East. We can debate the practicality of these events and should America and Europe even intrude on Israel with peace efforts? Nonetheless, they are setting the stage for peace deals proposed by the Antichrist. And, the year is not over, so more peace efforts may take place before year-end. But, I am reminded of the haunting words in Jeremiah 6:14: “Saying peace, peace, when there is no peace.”

4) Increasing Attacks on Christians, Christianity, Churches, etc. Thanks to Covid-19, churches, and Christianity in general, became gross inconveniences in 2020. Churches were either shut down or marginalized starting in March. Christians in America were harassed and even arrested for wishing to just practice their faith and meet for worship. Believers in the Mideast and Africa were slaughtered by the thousands. Jesus said a day was coming when we would be hated for His Name’s sake (Matt. 10:22).

5) Growing Apostasy and Wolves Among the Flock. Sound biblical preaching is fading with a rise in the love for experience, emotion, and unsound doctrine. There is even the love of the “doctrine of demons” (I Timothy 4:1). The New Apostolic Reformation continues to surge. A new, but very false teaching in both churches and seminaries, is the Marxist Critical Race Theory. At the same time, Bible prophecy has vanished from most pulpits, as well as support for Israel.

6) Pre-Tribulation Birth Pangs. The worst of the birth pangs are in the Tribulation, but we see a foreshadowing of these horrors now in the Church Age. Natural disasters are unprecedented globally. The destruction is heart-wrenching to watch and the suffering is unspeakable. This will increase to such a level in the Tribulation that what is happening now is minuscule in comparison. But the stage is again being set. All of the earth is groaning.

7) The Continued and Rapid Decline of the Culture. Everywhere evil is being called good (Isaiah 5:20). Aberration is celebrated. Netflix seemed to honor pedophilia with its “Cuties” feature and film. California passed pro-pedophilia legislation, removing felony status for sex with minors. Today’s character of mankind is outlined in Romans 1 and II Timothy 3—and it’s all predicted for a final generation. The Washington D.C. swamp is murkier than ever before!

8) The Rise of Strong Delusion. So much delusion arose in 2020 it is incalculable. What thinking person wants all police abolished? Or thinks America is a racist nation? Or destroys the economy over a virus? Or its youth think the Holocaust is a myth? II Thessalonians 2 suggests such a delusion is sent because there is no love of the truth. This will then cause people to fall for the lies of the Antichrist.

9) A Covid-19(84) Surveillance State Worsened and Preparation for NWO. Government intrusion and “contact tracing” abounded in 2020. People even had to “register” for church so they could be traced. The goal lines for easing government restrictions, lock downs, quarantines, and even face masks, kept changing. Clearly, society is being prepped for the Antichrist here in 2020. Around the world, people are being turned into mind-numbed robots. Many are cowering in fear.

10) The Longing for a Savior. With the world in a meltdown mode, millions are looking for just one superhuman man to bring back peace and prosperity. He is waiting in the wings! Most have rejected Jesus Christ. They will cheer for a short season for the Antichrist.

That’s my short list of prominent events in 2020 that have end-time significance! It could be seen as a heartbreaking list, but it heralds an imminent happening that many believers have been longing for—the return of the King of Kings. It could even be today.

Keep your eye on the Great Re-Set in 2021. Recently, World Economic Forum head Klaus Schwab said that they are working on implantable chips that can read our thoughts. If you think things will “return to normal” in 2021, think again.

So more uncertainty is ahead, as even the results of the 2020 election hang in the balance. God is shaking us up, trying to wake us up so that we will look up. If anything has been proven to be a surety in 2020, it is that this world is fading and is not our home. But, believers have a glorious one awaiting us.

Thoughts on “Reset” By Terry James Sense of an impending something-or-the-other is palpable. That is,…

Prophetic Perspectives: Tender Mercies By Col. Tim Moore Has life got you down and left…

Our World Hangs on the Edge of Eternity

Our World Hangs on the Edge of Eternity By Jonathan C. Brentner I tense up…

Salt, Light, and the Spirit of Antichrist

Salt, Light, and the Spirit of Antichrist By Terry James We’ve looked a number of…

A Hurricane Season Like No Other By Todd Strandberg At the end of each year,…