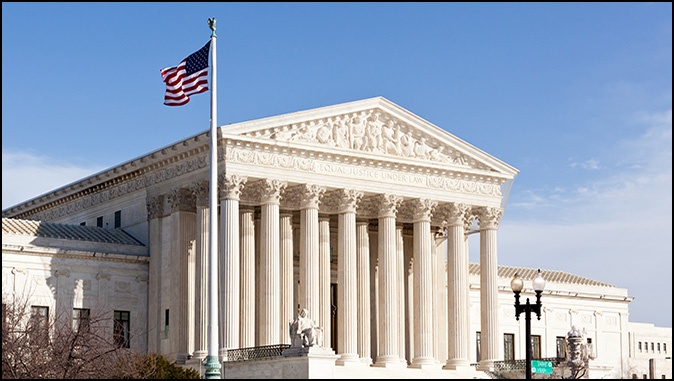 A riot-grade security fence has been set up around the Supreme Court. Someone leaked a document that showed how various justices would vote in a major ruling on Roe v. Wade. It appeared that 6 of them would vote to strike down the 1973 ruling that made abortion legal.

Roe vs. Wade should be overturned because abortion is not mentioned in the Constitution. We had many federal and state laws that said you can’t murder an unborn child, and nine men had the ability to void the rule of law. Justice Byron White dissented from the Court’s decision. White’s dissent, which was issued with Roe’s companion case, Doe v. Bolton, argued that the Court had no basis for deciding between the competing values of pregnant women and unborn children.

The supporters of abortion are a very strange group. Most of them are never going to have an abortion, but they are cheerleaders for other people to take the life of an unborn child. If there was a greater focus on planning and contraception, there would be far fewer abortions. Any child that a woman cannot care for or simply doesn’t want can be put up for adoption.

I think it is highly unlikely that Roe vs. Wade will be struck down. The Justices may have shown how they may vote in this straw poll, but when it comes to the final ruling, at least two of them will change their minds. Pressure groups, the liberal media, or Satan himself will work to make Roe vs. Wade the standard for why abortion is still legal.

I was very pleased to read that Justice Clarence Thomas had stated that government institutions can’t be “bullied” into giving people the outcome they want, multiple news outlets reported. Why it matters: Thomas didn’t directly address the leak of a draft opinion that would overturn Roe v. Wade, but he acknowledged that recent events at the Supreme Court might be one symptom of a judiciary that he views as threatened by people who are unwilling to “live with the outcomes we don’t agree with,” per the Washington Post.

Most of the leftist members of the Supreme Court have a voting record so faithful to the democratic agenda that they don’t even need to show up for oral arguments. It doesn’t matter if a law or a previous ruling was poorly written or based on false statements; they’ll vote left like a political machine.

Soon after being elected to the U.S. Senate, Joe Biden was pulled aside by a Democratic colleague who wanted to know how he was going to vote on abortion. Biden explained that while he was personally opposed to abortion and would resist federal funding for the procedure, he didn’t want to impose his view on others by overturning Roe v. Wade, the 1973 Supreme Court decision that legalized abortion nationwide. Today, you’re not allowed to have a personal opposition to abortion. Biden chants the abortion talking point that appears on his teleprompter.

One of the clearest indications that the Supreme Court is a cult of personality that rose up around the life of Ruth Bader Ginsburg: she died in 2020, and several items she once owned are now selling for big bucks. In one action, all of the auctioned items sold for well above their pre-auction estimates. A mink coat owned by Ginsburg with an estimated value of $500 to $1,000 sold for $16,000. A medal given to Ginsburg by the National Women’s Hall of Fame had an estimated value of $1,000 to $2,000. It sold for $30,000. In a January auction, items from Ginsburg’s library were sold. The auction house estimated the items would sell for a total of around $60,000. Every item sold well above its estimate, earning a total of $2.4 million.

Ginsburg was seen as a hero by the left because she was a key vote to support the abortion cause. She had many health problems in her final years, and every time she got sick, the liberal media noted how vital her vote was to abortion. Some believed that, in the lead-up to the 2016 U.S. presidential election, Ginsburg was waiting for candidate Hillary Clinton to beat candidate Donald Trump before retiring because Clinton would nominate a more liberal successor for her than Obama would.

It is interesting that there is no record of Ginsburg’s reaction to events. Once Trump won, her only option was to live long enough to make it through Trump’s presidency with a new president installed. She died four months too early as Amy Coney Barrett became her replacement.

I think many people need to question their own moral foundation when they place abortion on the same level as their most sacred beliefs. You aren’t protecting a basic right; you are in league with the angel of death.

“Woe unto them that call evil good, and good evil; that put darkness for light, and light for darkness; that put bitter for sweet, and sweet for bitter!” – (Isaiah 5:20).