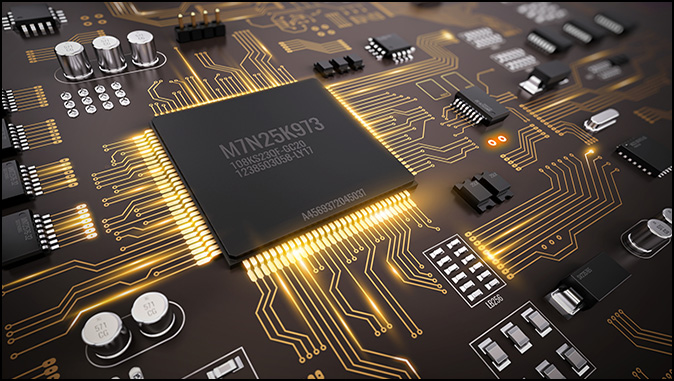 The Strategic Importance of Microchips
By Todd Strandberg

For years, oil was the most important commodity. In the past few years, it has become clear that the microchip has surpassed oil as a far more important commodity. We don’t have a strategic reserve of chips that we can pump into the ground for later retrieval. Oil took millions of years to become useful. Microchips can become outdated in less than 90 days.

The COVID lockdowns forced people to realize how much we use chips in our daily lives. You can open a card that plays a song that wishes you a happy birthday. You check your emails on your smartphone. You check into work at your factory or home office. All these actions are only possible by having access to microchips.

The internet is completely dependent on a system based on chip technology. Trillion-dollar firms like Amazon, Google, and Apple would not exist if it wasn’t for the microchip.

Looking around my room, I realize my phone, electric razor, and light bulbs would not function without this technology. I am mortified that we have fallen into a state where we are totally dependent on a few nations for these microchips.

The point where we realized how behind we had fallen in the production of chips is when we were not able to produce cars because of a shortage. We are so far behind that it will take until 2023 before the backlog is cleared.

At one point, chips were all made in America. As the price of manufacturing them rapidly declined, American companies turned to Asian firms to fulfill orders. It took decades to play out, but we eventually reached the point where our production levels were dangerously low. Taiwan now manufactures approximately 92% of advanced semiconductors; South Korea manufactures nearly all of the rest.

China’s dependence on foreign semiconductors is a key factor preventing a Chinese attack on Taiwan: should China attack Taiwan, Taiwan could destroy its semiconductors and infrastructure. But if China can ramp up its own domestic manufacturing while everyone else is behind, China is in a solid position to blackmail all the world economies.

The government has recently passed the US Chips Act, which is aimed at boosting domestic semiconductor production and improving technological competitiveness in the world. There is no guarantee that new plants will close the gap. We are about two years behind our competitors. Since it will take two years to build a microchip plant, we may find ourselves in the same position when our new factories come online.

Moore’s law is a term used to refer to the observation made by Gordon Moore in 1965 that the number of transistors in a dense integrated circuit (IC) doubles about every two years. For several decades Moore’s law was extremely reliable. In recent years Moore’s law began to slow down as we reached basic limits. The component of some transistors is now only a few atoms thick.

Most people have no idea that the Netherlands is the only source for high-end chip-making modules. In the southern Dutch town of Veldhoven sits the only factory capable of assembling a revolutionary machine that’s relied upon by the world’s biggest chipmakers. EUV lithography is the most expensive step in making the advanced microchips that power data centers, cars, and iPhones. The machines are made by only one company: Advanced Semiconductor Materials Lithography.

“ASML has a monopoly on the fabrication of EUV lithography machines, the most advanced type of lithography equipment that’s needed to make every single advanced processor chip that we use today,” said Chris Miller, assistant professor at the Fletcher School at Tufts University. “The machines that they produce, each one of them is among the most complicated devices ever made.”

ASML has sold a total of about 140 EUV systems in the past decade, each one now costing up to $200 million. The price tag for its next machine, called High NA, will be more than $300 million.

Its EUV machine is “so expensive that most companies cannot afford it,” said Joanne Itow, managing director of manufacturing at Semico Research. “It certainly has eliminated a lot of players out of the market,” including chip manufacturer GlobalFoundries, which decided a few years ago to stop working on more-advanced chips because of the high cost, she said.

We have nothing to fear from the Dutch’s monopoly lithography machines. China is the nation that we need to keep an eye on. China is coming up fast in the chip world, and I know it uses any advantage as a weapon against us. Just as Europe made a huge mistake in trusting Russia for its natural gas supply, we would be in a similar bind if China grained a monopoly in the Chip market.

America would still be the leader in microchips and many other technology fields if it had not faltered in our faith in God. By rejecting our first love, we removed the source of our once great wealth.

“But thou shalt remember the LORD thy God: for it is he that giveth thee power to get wealth, that he may establish his covenant which he sware unto thy fathers, as it is this day” (Deuteronomy 8:18).