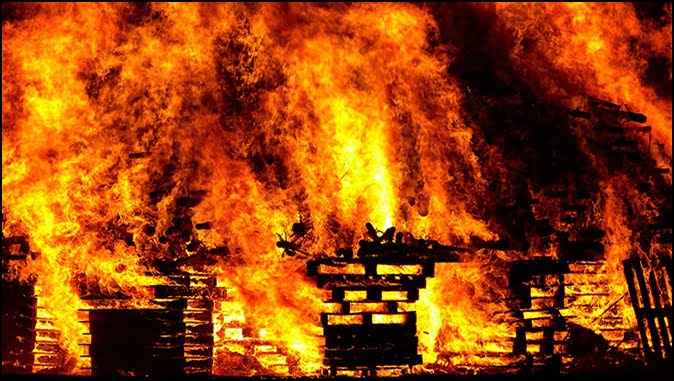 The Slow Burn of America
By Tony Perkins

When the mobs picked up guns and baseball bats and headed back into the streets last night, it was no longer about George Floyd. The chaos that’s erupting at dark has stopped telling his story — and started telling ours as a lost and desperate country. “It’s okay to be angry,” George’s brother said. But the man in whose name policemen are being shot, cities are being burned, and businesses are being destroyed would have never wanted this. He was “about peace.” And if the rioters cared about justice, they would be too.

But as dawn broke, even more cities had been brought to their knees by raging crowds that left officers in critical condition and communities beyond ruin. Despite curfews, low-flying military helicopters, and the deployment of the National Guard, hordes of crowds bent on violence hurled whatever they could find — rocks, fireworks, bricks — at teams in riot gear, torching cars and buildings along the way. As President Trump said earlier in the day, “These are not acts of peaceful protest. These are acts of domestic terror. The destruction of innocent life and the spilling of innocent blood is an offense to humanity and a crime against God.”

Like most Americans, the Floyd family has looked on with horror. “If his own family and blood are trying to deal with it and be positive about it, and go another route to seek justice,” Terrance Floyd insisted on ABC, “then why are you out here tearing up your community?” Floyd’s girlfriend also tried, emotionally telling them that “Waking up this morning to see Minneapolis on fire would be something that would devastate [him]. He loved the city.” Even Rev. Martin Luther King, Jr.’s daughter, Bernice, tried to break through the madness. Peaceful protests “did not fail my father.” And, President Trump insisted, they will not fail us now.

“America is founded upon the rule of law,” he reminded the country. “It is the foundation of our prosperity, our freedom, and our very way of life. But where there is no law, there is no opportunity. Where there is no justice, there is no liberty. Where there is no safety, there is no future. We must never give in to anger or hatred. If malice or violence reigns, then none of us is free.” If state leaders refuse to realize that and act, he will. “If a city or a state refuses to take the actions that are necessary to defend the life and property of their residents, then I will deploy the United States military and quickly solve the problem for them.”

To the anarchists, arsonists, looters, criminals, rioters, Antifa, and others, the message was simple: America won’t tolerate more. It’s time, former Cincinnati mayor Ken Blackwell said, “for local leaders to harness peoples’ grief and anger and channel it in a constructive direction.” Mayors, he insisted, “are the ones whose leadership matters the most right now… If they sit on the sidelines or if they fiddle [in fear] while their cities burn, they create a context where this sort of lawlessness is this accepted. And if you cower to lawlessness or you turn a blind eye… what you’re going to get is more of it.” And that, he warned, will rip apart the fabric of the community. In the end, Ken promised, that “will do more harm to [America] than COVID-19.”

Unfortunately, Americans have already seen what comes from a wasteland of leadership in places like Minneapolis, where Mayor Jacob Frey (D) stepped back and fueled the lawlessness by refusing to contain it. And quite frankly, he bears a lot of the responsibility for what’s spreading across the nation. He put his hands up and turned his city over to the agitators — giving leaders in other communities the license and excuse to do the same. Now look at the mess America’s in. Our law enforcers are literally engaged in hand-to-hand combat on U.S. streets. “What he did,” Ken agreed, “was actually tantamount to a dog whistle to terrorists and lawless thugs to terrorize his city.”

President Trump is taking the issue seriously, because he understands, as Ken said, “Those of us in positions of authority or influence have a duty to restore and unite for justice. Chaos and mindless destruction will destroy our communities.”

And for change to ever take root, there are deeper problems at work in this country that have to be addressed. Mob violence and police brutality spring from the same fountain: moral bankruptcy. As I explain in the Washington Times, the abuse of power, disregard for human life, and uncontrolled rage were witnessing in cities across our country, all flow from a society that is rapidly losing a sense of right and wrong, of transcendent truth. If there is an upside to this, it might be that in the quiet of our hearts, we’ll finally realize that goodness, truth, and beauty only comes from God. He’s the One who delivers hope — and in the midst of this crisis — the One who delivers healing.