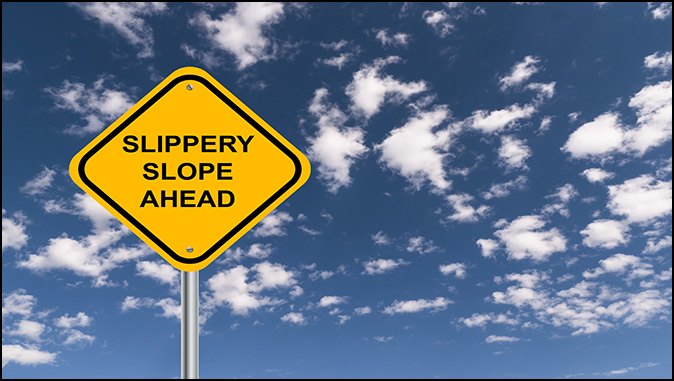 The Slippery Slope: Harbingers of Total Tyranny
By Jan Markell

The world is groaning in every category, and it lacks a leader. Biden, Macron, Trudeau, et al, have all demonstrated behavior that resembles the Keystone Kops. So what’s ahead?

I hear from a lot of people! Here are some of the scenarios they see playing out in the near term. They can’t all be right, but here’s a brief run-down of what many suggest is ahead of us. You may disagree with one or all points, but millions of people believe one of the following scenarios will play out.

1) A great awakening is coming. A tremendous revival. The days of Joel 2:28 are coming when God pours out His Spirit upon all people. This will precede the Rapture of the Church.

2) God is long-suffering and patient and wants all to be saved; thus, we have decades left to share the gospel and rescue the lost. Let’s occupy until He comes and not be so heavenly-minded that we are no earthly good. We’ve heard about the Lord’s return for decades, yet nothing happens.

3) In America, the forthcoming elections in 2022 and 2024 are going to turn America around. We can and will make America great again. Prosperity will return. Life will go back to normal. With the right people in office, earthly government works.

4) The Church is being perfected and tried by fire. But she will prevail, and the Church will correct the problems on this planet, fulfilling “On earth as it is in Heaven.” The Church will have dominion over the whole earth, and then Christ can return. (Kingdom Now/Dominion Theology)

Sorry, folks, but points one through four are not what I see outlined in the Bible! World governments are in a predicted state of collapse thanks to the meddling of the globalists. They are causing instability, famine, war, poverty, and obsessing on the fake news called climate change.

The capitals of the world are preparing for the Antichrist and are taking directions from the World Economic Forum, Klaus Schwab, Yuval Harari, Bill Gates, and other globalists who delight in trampling on the people. They are acting as lawless and reckless as is every leftist in Washington, D.C., and the right isn’t pushing back!

Living When Truth Does Not Matter

Former White House correspondent Bill Koenig writes in his weekly e-newsletter, “The late conservative journalist and pundit Charles Krauthammer said once, ‘We are living at a time when truth doesn’t matter.’”

Koenig continues, “We see this in the liberal media every week and with many of the Congressional Democrats. They are dishonest and/or incapable of processing the truth, denying truth because the end justifies the means, or they are totally deceived. A spirit of delusion is prevalent in our county today.”

“And for this cause God shall send them strong delusion, that they should believe a lie” – (2 Thessalonians 2:11).

Journalist Bill Wilson says we are on a “slippery slope to tyranny.”

He writes, “The FBI raid of Donald Trump’s home should be a wake-up call to all Americans that the Democratic Party leadership is intentional about re-imagining the homeland into a statist nation.”

“From David Koresh and Elian Gonzalez during the Clinton years, to IRS treatment of conservative and Christian organizations, to the Russian influence scam, to spying on Trump’s campaign, to the news media under Obama, Democrat regimes increasingly have abused government power.”

Wilson concludes, “This week, people should at least consider that the FBI raid on Trump’s home and the passage of the misnamed Inflation Reduction Act of 2022 are harbingers to the tyrannical agenda of the extreme left.”

“But evil men and seducers will wax worse and worse, deceiving and being deceived” – (2 Timothy 3:13).

Curtain About to Rise

The stage is being set daily for a drama that will be the story of the ages. The players are on the stage right behind the curtain. Our Heavenly Father is the writer, director, and producer of what is to come. An angel is holding a trumpet with his hands clasped around it. The Bridegroom has had enough of the foolishness of Godless men and is calling His bride, the Church, Home very soon.

There will, indeed, be a revival, but it will be during the seven-year Tribulation, the Time of Jacob’s Trouble. The Four Horsemen may be out of the barn soon. They’ll appear over a ridge once the Church is called to meet her Bridegroom.

The Disappearing Act is Next

I believe the scenario I represent does not allow time for “turning things around,” a “great awakening,” “making America great again,” or for the Church to crush the evil of our day (Dominion Theology). Instead, the Church is going to suddenly disappear and fade off the scene!

So, soon and very soon, we are going to see the King.