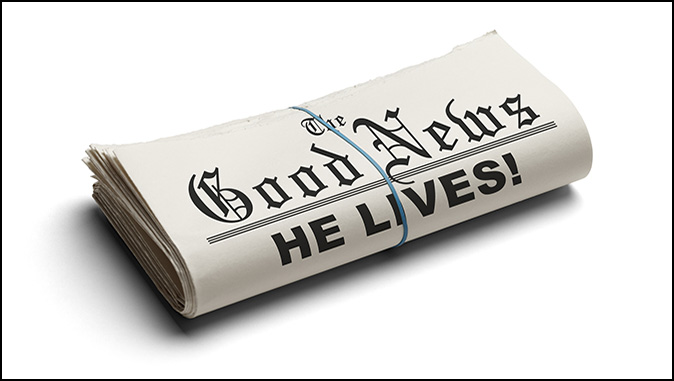 The News and the Good News
By Hal Lindsey

You may have seen the meme that says, “I checked Kelley Blue Book today for my car’s value, and it asked if the tank was full or empty.”

Like all good jokes, the humor is rooted in truth. As of June 2022, the average price of a gallon of gasoline had doubled since January 2021. That’s a staggering rate of growth and completely unsustainable. For a lot of people in Washington, it’s just a matter of politics. But for the rest of us, it’s about life.

Can you imagine what this does to a single mom or dad, struggling to get by? Think of what it does to an elderly person living on a fixed income when he or she spends almost a hundred dollars (maybe more) for a tank of gas? For one thing, it leaves less money to buy food — the cost of which is also going through the roof. The cost of everything is going up fast, and it looks like that trend will continue for at least the immediate future.

The Federal Reserve’s response seems to be to take the nation into a recession to try and stop inflation. But that’s a little like killing a patient to get his blood pressure down. Yes, death is an absolute cure for high blood pressure, but it seems a little extreme. Somehow, they have to try to keep the economy moving forward while also getting inflation under control. It’s a job I don’t envy.

Meanwhile, the stock market has been going down. Real estate values have been falling. Retail sales are in decline. And it looks like there will be increasing global shortages of everything from food to the fertilizers needed to grow that food. With stocks down, 401(k) and other investments are down among, not just for the rich, but for regular people. This is forcing many to delay long-planned retirements.

All that’s bad news for the United States, but it’s also bad news for the world economy. Planet earth finds itself in an increasingly desperate financial situation. And that’s just one facet of the global condition. We could look at any number of other topics that are also discouraging or even depressing.

But these things are merely the news. And the news changes day by day. The Good News in Christ Jesus, however, does not change.

In 2 Corinthians 1:20 (NKJV), just two verses down, the Bible says, “All the promises of God in Him are Yes, and in Him Amen.” His promises do not depend on who occupies the White House or who sits on the Supreme Court. They depend only on the trustworthiness of Almighty God and the efficacy of the blood Jesus shed on the cross to save us from sin.

When you hear the wind howling and the surf pounding, remember that if you are building your life on the firm foundation of Jesus and His word, He will care for you no matter what comes. The storms of life will pound into ruin those structures built on sand. Jesus warned about the dangers of building on unstable things — that is, building on anything less than Him and His word. But He also gave comfort to all who build their lives on Him.

In Matthew 7:24-25 (NKJV) He said, “Whoever hears these sayings of Mine, and does them, I will liken him to a wise man who built his house on the rock: and the rain descended, the floods came, and the winds blew and beat on that house; and it did not fall, for it was founded on the rock.”

If you have not yet placed your life in His hands, it’s not too late. Jesus paid for all your sins, past, present, and future. He offers you the gift of pardon right now. Tell Him you want Him to take over your life and make it what He wants it to be. You can do that right now, wherever you are.