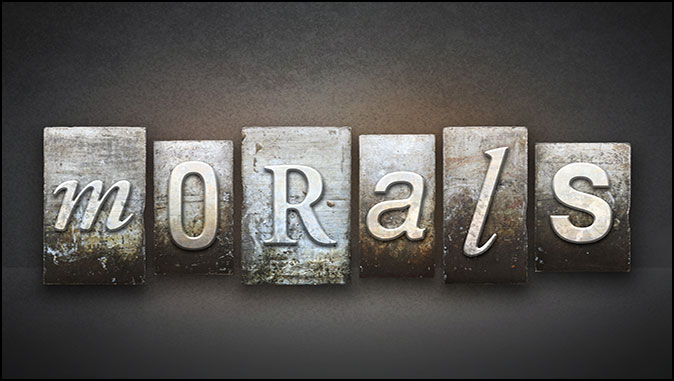 In his 1970 book Between Two Ages: America’s Role in the Technotronic Era, ultimate globalist Zbigniew Brzezinski (member of the CFR, the Bilderberg Group, the Trilateral Commission, advisor to 3 Presidents, etc.) said, “The Technotronic Era involves the gradual appearance of a more controlled society. Such a society would be dominated by an elite, unrestrained by traditional values.”

As this writer sees it, Brzezinski was calling for gradual but greater control of citizens by a powerful world government run by unelected elitists who are not influenced by religious values.

This would be a world government run by atheists that would oppose all references to God and Christianity (Rom. 1:18-25 is a good description of what atheists do).

In 2012, environmentalists in the United Nations called for the Ten Commandments to be rejected and the UN Earth Charter to be accepted as the world’s governing moral code.

Supporters called this a new form of religion that is devoid of the notion of a Supreme Being (Satan started this with Adam and Eve in the Garden of Eden).

On Mar. 7, 2020, it was reported that a UN Official, Ahmad Shaheed, suggested that UN-designated human rights must take precedence over the religious beliefs of people. Shaheed said the laws of many nations were influenced by the religious beliefs of their citizens. He said the laws of nations must be changed if they conflict with the human rights that have been adopted by the UN.

This UN official was saying the UN must have the right to decide what is right. Some of the ultimate goals are what is wrong and who can preach.

This writer believes the transformation of more than 190 nations with many different religions into a world government with a godless social ethic (a satanic world religion) is taking place now.

– The identification and tracking of everyone on earth.

God has promised that He will not let them succeed (prevail against the Church).

The developing godless social ethic signifies the approaching Rapture because Satan’s world government and world religion cannot appear while the Church is here.

Here are other recent events:

ONE, on Oct. 13, 2021, it was reported that the UN Sec. Gen. forwarded a report to the General Assembly requesting approval of “criminal penalties against anyone who criticizes gender theory, sexual orientation, gender identity, and even sex-ed.”

The report calls the Christian Church an “egregious threat” and states that “the Church’s doctrines on life and family constitute a violation of human rights law.”

This may or may not get approved, but this shows the danger that world government and world religion pose to Church doctrine, teaching the Scriptures, the freedom of speech, etc.

The UN wants to determine what is taught or not taught about abortion, homosexuality, Creation, the Bible, the Koran, etc., in every school system and to be able to silence all opposition.

(More: It is now being reported that schools that teach about the Holocaust may soon be required to teach opposing views of the Holocaust.)

TWO, on Oct. 13, 2021, it was reported that Biden’s proposed $3.5 trillion spending bill will incentivize people to live together without getting married and penalize those that get married.

Those that live together without getting married will be allowed to treat their incomes separately for tax purposes, thus making them eligible for larger welfare checks, put them in lower tax brackets, etc.

Those that decide to marry will be required to combine their incomes for tax purposes, thus making them eligible for smaller welfare checks, put them in higher tax brackets, etc.

This is a rejection of the God-given, Biblical structure of a family, and hopefully, most or all of it will not pass in the U.S. Senate.

(Note: It was Biden’s party that removed all mention of God from their Party Platform, a member of Biden’s Party said Congress is not interested in the will of God, and Biden himself thinks Climate Change is a greater threat to America than America’s abandonment of God.)

THREE, on Oct. 18, 2021, a website posted another great article by Catholic Archbishop Vigano.

Here are a few high points from Vigano’s article in my words.

– The globalist elite are using hand-picked politicians to clearly reveal the kind of society they want to establish.

– They are using Covid and Climate Change to create a system to evaluate everyone’s behavior (like China’s Credit Score System) to determine whether one can work, enter stores, travel, be eligible for medical care, etc.

– They assure people that their system is based on brotherhood, but a person can only be a brother if they are not a Christian.

– They declare respect for all cultures and religions (and they do respect all kinds of idolatry, immorality, etc.), but there is one religion that they do not respect, and it is true Christianity.

– Lying (deceit) is supreme, and there is no room for truth (those that disagree with the globalists are censored, condemned, targeted for investigation, etc., but those that agree with them are publicly praised, interviewed on tv, etc.).

– What the globalists are doing is a crime against humanity and God.

– Christians do not have billions of dollars like Soros and Gates, but Christians have something they don’t have: God’s promise that the gates of Hell will not prevail against the Church.

FOUR, concerning world government, loss of rights, and persecution: on Oct. 18, 2021, a reader in Australia sent this: “Today, some States of Australia have told people, ‘Don’t expect any rights in 2022 if you are unvaccinated.’”

FIVE, concerning world government: on Oct. 15, 2021, a prophecy teacher said: “The UN, as I shared with you earlier, originally had a long-range plan to do this (to establish a digital currency and world government) based on the due date of the year 2030. They have now formally accelerated that date, and the UN has now formally announced that the world will be going to a world global government in the year 2023…It sounds like a great, grand conspiracy. It is not a conspiracy. It was a conspiracy back 10-20 years ago, but it is being implemented now.”

I have reported that former Pres. Trump said on Sept. 16, 2021, that, “We’re not going to have a country left in three years,” and that UN Sec. Gen. Guterres wants world leaders to hold a “Global Summit of the Future” in 2023 to study ways to strengthen global governance (make world government more powerful) and make sure global policies are being enforced.

I have reported seeing many articles calling for the establishment of a world government by 2030 or sooner, but if there has been a formal UN announcement that globalists will establish a world global government in 2023, I have not seen it. I do not want to report something that is not true, but this is so important that I thought I should pass it on.

One thing is sure; if it is true, we will know it in a few months or sooner.

The Bible says the Holy Spirit will draw them back, and the return has not stopped for anything including war, Covid lockdowns, or anything else.

SEVEN, concerning the Battle of Gog and Magog: on Oct. 12, 2021, Israeli Foreign Min. Yair Lapid said Israel reserves the right to use force to prevent Iran from getting nuclear weapons.

The next day, Oct. 13, 2021, Iran’s Ambassador to the UN sent a letter to the UN Security Council with a warning against Israel attacking Iran’s nuclear facilities.

(More: On Oct. 18, 2021, it was reported that Israel has approved $1.5 billion to prepare the IDF for a possible strike on Iran’s nuclear facilities.)

Shortages cause some companies to go out of business (bankrupts them for lack of sales), are used by some companies to raise prices and greatly increase profits (price gouging), are desired by some globalists that believe the world is causing global warming by consuming too much, etc.

Considering that union leaders have been warning government leaders that Covid restrictions and quarantines are causing distribution problems, it is not hard to believe that the current shortage of many things, including food, may be another intentionally created crisis.

It is easy to believe that the globalists are creating crises that they will soon say can only be solved by a global government.

FYI: A growing number of experts are warning that shortages (food, utilities, food, etc.) will make this winter very rough.

NINE, concerning wickedness and violence: it has been reported that multi-billionaire globalist and Democrat supporter George Soros has given at least $1 million to an anti-police movement in Austin, TX.

Murders and assaults are up, and he wants fewer police, not more.

TEN, on Oct. 1, 2021, it was reported that a U.S. Dept. of Defense study of 5.6 million Medicare beneficiaries 65 years old or older found that the vast majority of people that had been hospitalized for Covid had been fully vaccinated.

ELEVEN, on Oct. 18, 2021, after reporting that fully vaccinated 84-year-old former U.S. Sec. of State Colin Powell died of complications from Covid, it was reported that he died because blood cancer left him vulnerable to Covid.

God Is Frustrating the Democratic Agenda