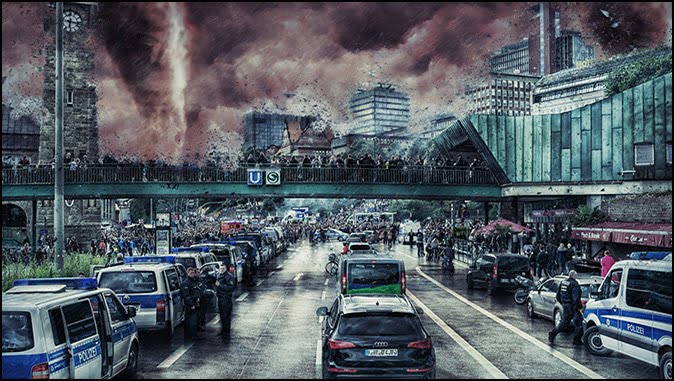 The New Factor Concerning the Signs of Nature (Part 3 of 3)
By Dr. David Reagan

The Message of Katrina

I believe the message of Katrina and similar natural disasters is that God is on His throne. He is in control. He cannot be mocked. He will not tolerate the division of His Holy Land. Nor will He tolerate gross immorality that mocks everything that is moral and decent.

God loves our nation. He has blessed us more than any other nation. His Word says that to those to whom much is given, much is expected (Luke 12:47-48). His Word also says He disciplines those whom He loves (Hebrews 12:7).

Another thing His Word makes clear is that when He sends discipline, the fundamental purpose is never to punish. Instead, the purpose is to call people to repentance so that they might be saved. Here’s how the prophet Isaiah expressed it: “When the earth experiences Your judgments, the inhabitants of the world learn righteousness” (Isaiah 26:9b).

I know the truth of this statement firsthand. In May of 1953 when I was 15 years old, an F5 tornado hit my hometown of Waco, Texas. To this day it is the most deadly tornado in Texas history. It killed 114 people and injured 597. It ripped through the center of the downtown area and leveled five-story buildings with ease. When it was over, the city looked like it had been hit with an atomic bomb.

For three months thereafter, the churches of Waco were packed with standing room only crowds as people sought to cope with the tragedy. People were forced to think about eternity. But gradually the pain subsided, people returned to their old ways and church attendance fell off.

Our God is truly a God of amazing grace. Even when He pours out His wrath, He does so hoping that it will provoke repentance so that people can be saved.

With regard to Hurricane Katrina, the Governor of Louisiana, Kathleen Blanco, called for a statewide day of prayer: “As we face the devastation wrought by Katrina, as we search for those in need, as we comfort those in pain, and as we begin the long task of rebuilding, we turn to God for strength, hope, and comfort.”

Noble words. But notice, there was no call to repentance.

In like manner, President Bush called for a national day of prayer. He asked the nation to pray for the victims and to reach out to them in compassion. Again, noble words, but no expression of repentance.

New Orleans City Council President Oliver Thomas came the closest of all public officials in recognizing that Katrina had a spiritual message. Referring to Sodom and Gomorrah, he said, “Maybe God is cleansing us.”

But cleansing requires a response of repentance, something God is calling for from the whole nation, and not just the citizens of New Orleans.

No public official in our nation has yet seen the spiritual implications of a disaster as clearly as did Abraham Lincoln when he evaluated the cause of the Civil War. In a proclamation dated March 30, 1863, the President called for “a national day of prayer and humiliation.”

He began the proclamation by observing: “It is the duty of nations as well as men to own their dependence upon the overruling power of God, to confess their sins and transgressions, in humble sorrow, yet with assured hope that genuine repentance will lead to mercy and pardon.”

The heart of the proclamation read as follows:

And, insomuch as we know that, by His divine law, nations like individuals are subjected to punishments and chastisements in this world, may we not justly fear that the awful calamity of civil war, which now desolates the land, may be but a punishment, inflicted upon us, for our presumptuous sins, to the needful end of our national reformation as a whole people?

We have been the recipients of the choicest bounties of Heaven. We have been preserved, these many years, in peace and prosperity. We have grown in numbers, wealth, and power, as no other nation has ever grown. But we have forgotten God. We have forgotten the gracious hand which preserved us in peace, and multiplied and enriched and strengthened us; and we have vainly imagined, in the deceitfulness of our hearts, that all these blessings were produced by some superior wisdom and virtue of our own.

Intoxicated with unbroken success, we have become too self-sufficient to feel the necessity of redeeming and preserving grace, too proud to pray to the God that made us!

It behooves us then, to humble ourselves before the offended Power, to confess our national sins, and to pray for clemency and forgiveness.

How we need such a proclamation today! The sad thing is that we have become so secular and pagan that if our President were to issue such a statement, members of Congress would probably bring impeachment proceedings against him for “violation of the separation of church and state.”

We as a nation have set our jaw against God. We are tempting Him to move us from judgment to destruction. Our God is so merciful. He is patiently sending us one wake-up call after another because He never pours out His wrath without warning.

God has provided us a temporary window of grace through the election of President Trump. Pray for him to stand strong in his support of Israel. Pray for him to come to an understanding of the nature of the Middle East crisis — that it is a spiritual one that cannot be solved by political negotiations and agreements.

Pray that he will not be deceived into demanding that Israel surrender its heartland. Pray too that both Americans and their leaders will open their eyes and hearts to the significance of the natural disasters that are relentlessly afflicting our nation. Pray that pastors will awaken to the fact that all the end time signs are converging and that it is urgent for them to start proclaiming the soon return of Jesus.

Pray too that people around the world will be awakened to the reality that God is proclaiming through the Signs of Nature that His Son is about to return and that we are living on borrowed time.

The Table of Nations

The Yellowstone Area Continues to Rumble

ID2020, the Chip, and the Mark By Nathan Jones There’s a lot of talk right…

Ichabod: The Glory is Departing (Part 2 of 4)

Ichabod: The Glory is Departing (Part 2 of 4) By Col. Tim Moore The Symbolism…

Rage on Earth and Laughter in Heaven