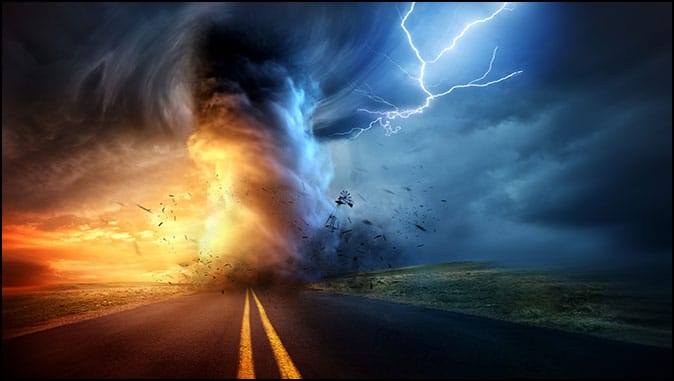 The Great Tornado Outbreak of 2021
By Todd Strandberg

I’ve always had a profound interest in weather. Many times when a thunderstorm comes rolling through here in Benton, Arkansas, you will find me out on my porch watching the storm. That was the case this past Dec 10th. A single thunderstorm had popped up over the central part of the state. I thought how lucky it was to have it pass over the town.

My smartphone had a warning message that said we were at the southern end of a tornado watch. I didn’t think we were in any danger, but I was impressed by the inflow energy of the storm. It seemed like one of those thunderstorms that a tropical storm or hurricane would generate as it comes on land.

A few days later, I was watching a YouTube video from a weather station out of Louisville, Kentucky. A woman showed the radar of the storm that devastated Mayfield and other communities. I immediately realized that the thunderstorm was the same one that passed over Benton. Terry and I weren’t in any real danger because the storm was not rotating when it came through. It turned tornadic when it got 80 miles down the road.

It will take several weeks to document the storm damage. What we have already learned is shocking. The tornado, being called the “Quad-State Tornado,” ripped across four states in four hours (Arkansas, Missouri, Tennessee, and Kentucky). There is a path of catastrophic damage that is 230 miles long and as wide as three-quarters of a mile. Meteorologists are trying to verify if all this damage is from one single tornado. If this is the case, it would rival the 1925 Tri-State tornado that killed 695 people as it traveled 219 miles across Missouri, Illinois, and Indiana. So far, they had proved that the same tornado traveled at least 125 miles.

The Mayfield tornado sent debris 30,000 feet into the air, the cruising altitude of many passenger jets, and scattered prom photos, handmade quilts, and wrapped Christmas gifts scores of miles away from the tornado’s path. One photo was found on a car window 130 miles away from its owner.

The death toll in Kentucky has now exceeded 70, including 12 children, and is expected to keep growing. Gov. Andy Beshear has called it “the deadliest” in the state’s history. The total death toll from the Dec 10th outbreak will likely be over 100 lives lost.

The average number of tornadoes in most of the states hit was less than one per year for December. It is amazing to have Kentucky hit by over a dozen twisters. There was a total of 44 tornadoes on that day.

The last EF4 tornado to strike the U.S. during the month of December was during the Christmas Outbreak of December 2015. Since the strength of a tornado is constantly changing, it may take several weeks to find out if any tornado had the rare EF5 wind speed. The last EF5 tornado in the U.S. hit Moore, Oklahoma, in 2013.

Five days later, we had another tornado outbreak. Half of the Lower 48 endured historic and dangerous weather as an extremely powerful storm system swept through the middle of the country, unleashing damaging winds and, in some areas, tornadoes, dust storms and out-of-control fires.

Winds of 70 to 100-plus mph sheared off roofs, overturned vehicles, toppled trees, and caused hundreds of thousands of power outages while contributing to hazardous ground and air travel. From New Mexico to Michigan, more than 36 million people were under high-wind warnings. In Colorado, several locations clocked gusts over 100 mph.

Due to a fast-moving complex of violent storms, known as a derecho, the National Weather Service logged at least 55 reports of hurricane-force wind gusts (75-plus mph), the most in a single day on record.

A tornado touched down in Plainview, Minnesota, just outside Rochester on Dec 15th, according to the National Weather Service. This was the first time Minnesota has recorded a tornado in December.

There were at least three tornadoes that touched down in Iowa. I grew up in Iowa and don’t recall ever having even a tornado watch in December. The two derechos that I experienced in the 47 years that I lived in the area were both in the summer.

All these tornadoes are part of the end-birth pangs that warn that the tribulation hour is drawing near. Many people wonder why disaster strikes the good people of the heartland. A 9.0 quake striking San Francisco would seem to be more appropriate. I don’t think there is any area of the country that is righteous enough to deserve God’s special protection from calamity. If a twister had touched down from that thunderstorm as it passed over my house, I would have looked over at my cat Bud sitting in the next chair and said, “I guess we’re going home early.”