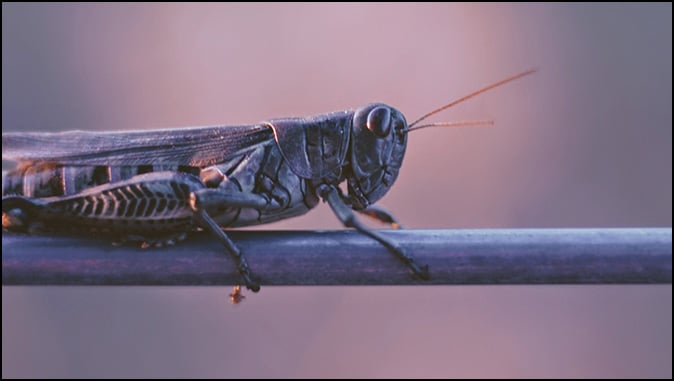 The Great Locust Plague of 2020
By Todd Strandberg

The year 2020 has been such a disaster, it will likely take some time to figure out what made it such a train wreck. Unless we end with a global nuclear war, the coronavirus and the financial meltdown will dominate how people are remembering this year. There is a third calamity taking place in Africa that is currently a second-page news story, but it has my attention because of its Biblical connection.

A massive swarm of locusts has invaded at least eight countries (Kenya, Uganda, South Sudan, Ethiopia, Somalia, Eritrea, Djibouti and Sudan). About a month ago, this cloud of insects was declared the worst plague of locusts in 70 years. It would appear we are headed toward breaking the record set during the time of Moses. However, I read in the Bible that the plague on Egyptians was promised by God to be a “…dense swarm of locusts as had never been before, nor ever will be again” (Exodus 10:14, ESV).

This infestation of desert locusts first arrived in East Africa last June, feeding on hundreds of thousands of hectares of crops and pastureland. They came from the uninhabited portion of the Arabian Peninsula which is normally bone dry. In 2018, two perfectly timed cyclones dumped heavy rains in this region, creating the ideal wet, sandy conditions the desert locusts require to breed.

Three generations of breeding occurred in nine months, causing locust numbers to increase by 8,000 times and forming the original source of the East Africa upsurge. Scientists say these devastating insects never left East Africa: in fact, favorable wet conditions due to above average rainfall this season mean they are likely to achieve two more generations of new breeding by June this year, increasing their population size up to 400 times.

Eventually, the desert is going to dry up, and the swarm of locusts will move inland. A typical swarm can consist of up to 150 million locusts per square kilometer. These insects move with the wind, and can migrate as far as 150 kilometers in one day. Even a tiny, one-square-kilometer locust swarm is capable of consuming the same amount of food in one day as approximately 35,000 people.

The coronavirus lockdown is harming the effort to combat the swarm. Some farmers in Abokat’s village near the Kenyan border bang metal pans, whistle or throw stones to try to drive the locusts away. But mostly they watch in frustration, largely barred by a coronavirus lockdown from gathering outside their homes.

From the Food and Agriculture Organization (FAO) of the United Nations: “Suppliers of motorized sprayers and pesticides are facing major challenges with limited air freight options to facilitate delivery,” Cyril Ferrand, FAO’s resilience team leader for East Africa, said on March 30. “Purchased orders were placed [a] few weeks ago and pesticides expected last week in Kenya have been delayed by 10 days.”

The coronavirus pandemic is just getting started in Africa. There have only been 562 reported deaths and nearly 11,000 COVID-19 cases, according to Al Jazeera, which are relatively low figures compared with other affected regions. As the number of cases spike, the locust invasion is going to be a low priority of governments and world organizations.

A year from now we will likely be writing articles about the Great Famine of 2021. East Africa already has 20 million severely food-insecure people, who barely eat enough to fill their stomachs each day. The region was recently devastated by conflict, droughts, and floods. With food lines forming in America from the lockdown, it’s going to be hard to draw attention to a crisis on the other side of the globe.

It is widely believed in the pre-tribulation rapture camp that we are only to see the birth pangs up until the rapture takes place, not the wrath. Since God is always trying to get man’s attention with calamity, I think what we are seeing is a shadow of what will unfold during the tribulation hour. The locusts in Moses time only ate plants, as do the locusts of today. The locusts of Revelation will prey upon people. I warn all salvation fence-sitters to repent now to avoid a far greater wrath to come.

“Then the Lord said to Moses, ‘Go in to Pharaoh, for I have hardened his heart and the heart of his servants, that I may show these signs of mine among them, and that you may tell in the hearing of your son and of your grandson how I have dealt harshly with the Egyptians and what signs I have done among them, that you may know that I am the Lord.’ So Moses and Aaron went in to Pharaoh and said to him, ‘Thus says the Lord, the God of the Hebrews, ‘How long will you refuse to humble yourself before me? Let my people go, that they may serve me. For if you refuse to let my people go, behold, tomorrow I will bring locusts into your country, and they shall cover the face of the land, so that no one can see the land. And they shall eat what is left to you after the hail, and they shall eat every tree of yours that grows in the field…’” (Exodus 10:1-19, ESV).

“They were told not to harm the grass of the earth or any green plant or any tree, but only those people who do not have the seal of God on their foreheads. They were allowed to torment them for five months, but not to kill them, and their torment was like the torment of a scorpion when it stings someone. And in those days people will seek death and will not find it. They will long to die, but death will flee from them” (Revelation 9:4-6, ESV).