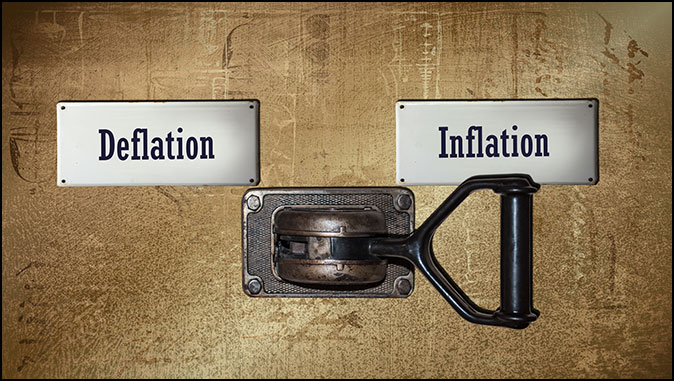 The US government has told the American people that we don’t need to worry about inflation getting out of control. Despite recent high inflation numbers, Fed and Treasury officials have stated that they believe the uptick number is related to the Covid-19 virus, and they will decline once the supply change fully comes back on line.

They said the current inflation is “transitory,” meaning prices will plunge once things return to normal. There are several reasons that conflict with this transitory argument. The nation’s money supply has been increasing by a massive amount. Of all the currency in circulation, 40% was printed in the last year.

Employers are at a huge disadvantage when it comes to wage growth. Baby boomers are retiring in droves, and they are not being replaced by enough Generation Z workers entering the workforce. As the US population ages and an increasing proportion of the workforce retires, companies are likely going to be hard-pressed to find new workers. According to Oxford Economics, an estimated two million workers have retired since the beginning of the pandemic, representing a retirement rate that is roughly double that of 2019.

There are several economists who believe we are not going to see higher inflation because the Fed has isolated all the new money that was recently printed, and they point to the decrease in the velocity of money. Some of these economists warn that we actually face the danger of deflation where the price of things will decline.

The monetary system is very complex, and it’s hard to understand what all these big numbers mean. Because they have a direct impact on all Americans, it is important to have a basic understanding of macro-economics. I watched a video by John Titus, and I think he cut right to the heart of the financial matter by describing what the Fed is actually doing.

The Fed’s current balance sheet is at $8.5 trillion; in 2008, it was only at $900 billion. At the current rate, it buys about $140 billion in bonds each month. The Fed has several other programs that purchase trillions of dollars in other securities.

We are told not to worry about the Fed’s massive purchases of the national debt because when things calm down, the Fed is going to sell all these assets. It is pure insanity to think that the Feb can just go to the market and put $8 trillion of bonds up for sale and expect a buyer to emerge.

Anyone who holds US government debt, in my view, is a sucker for heavy losses. The current inflation rate is about 6 percent. The best rate you can get is the 30-year bond, which pays 1.96%. Anyone holding these bonds is losing 4 percent each year or their purchasing power.

Fund managers turn to US debt because they see it as a financial safe haven. Because the government can never go into bankruptcy, people see the bonds as a secure location for funds. The problem with the dollar is that it is managed by an organization that has the ability to print an unlimited amount of money. If it wanted to create a quadrillion dollars in currency, it could be easily done with the pressing of a keyboard.

For a long time, it was not possible for the Feb to inject money directly into the general economy. Only a select number of banks had accounts with the Fed. These member banks could not transfer reserve assets to non-member banks.

One indication that money is leaking into the general economy is the fact that we have 5 companies with a market cap of over a trillion dollars. There is clearly something wrong with our financial system when you have Tesla reach a level where is it is more valuable than all other auto companies on planet Earth.

This is a very dangerous and shocking change in the operation of our central bank. When a nation reaches the stage where it is printing money and pumping it directly into the economy, financial disaster is always the outcome. I advise all readers to take out any money you may have in bonds or a money market fund. I’m obviously not a financial advisor, but I think a precious metals fund would be a far better investment.

I’m not all that fearful of hyper-inflation because I think the rapture will occur before things get out of control. The economy has remained strangely stable for about 20 years, which is a record that defies 3,000 years of financial history. Time and time again, Bible prophecy is the only explanation I can come up with for this think-not mentality.