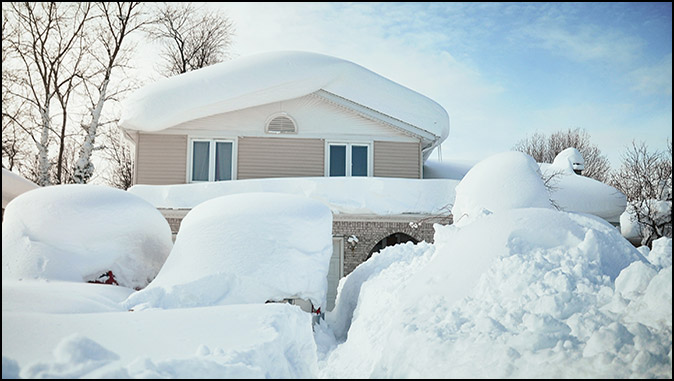 The Great Buffalo Blizzard of 2022
By Todd Strandberg

I’ve often wondered why anyone would want to live in the Great Lakes, especially in the zones that receive lake-effect snow. When I lived in Nebraska, most major snows only delivered 4-6 inches. Here in Arkansas, we just wait a couple of days, and the snow will all melt away. About every third year, we don’t receive any accumulating snow during the winter season.

I remember the great Blizzard of 1977 – widely known as Buffalo’s worst storm of all time, at least prior to this month. That storm hit Western New York and Southern Ontario from January 28 to February 1, 1977.

The ’77 storm was so bad that many people thought they would never see one that was worse. “I’d be shocked if we got another storm to compare to the Blizzard of ’77 in my lifetime, in my kids’ lifetime, or even in their kids’ lifetime,” a National Weather Service meteorologist told the Buffalo News for their story five years ago. He called it a once-in-200-year weather event.

During the Blizzard of ’77, there were some areas that received over 100 inches of snow. Lake-effect snow can vary greatly because it is the result of winds drifting over the same location for a long period of time. Most areas in Buffalo only got a foot of snow. The huge drifts in the city were the result of winds of 46 mph with gusts up to 69 mph and 13 hours of whiteout conditions. The snow blew in from miles away.

Unlike in ’77, Lake Erie was not frozen over, so last week’s storm was able to dump massive amounts of snow on Buffalo. After already getting 4 feet of snow, another 22 inches had fallen on Friday, which was nearly double the previous one-day snowfall record.

More than 37 people are reported to have died in the region. The toll surpasses that of the historic Blizzard of 1977, blamed for killing as many as 29 people.

The dead were found in cars, homes, and snowbanks. Some perished while shoveling snow, others when emergency crews could not respond in time to medical crises. Poloncarz, a Democrat, called the blizzard “the worst storm probably in our lifetime,” even in an area known for heavy snow. More bodies are expected to be found as the snow is cleared or melts.

Hochul, a Democrat, noted the storm came a little over a month after the region was inundated with another historic snowfall. Between the two storms, snowfall totals are not far off from the 95.4 inches the area normally sees in an entire winter season.

Unlike the Blizzard of 1977, there has been a huge amount of looting in the Buffalo area. Several stores like Walmart, Dollar General, Louie’s Texas Red Hots, Rick’s Sports Apparel, the Broadway Market, a 7-Eleven, Family Dollar, and other Mom & Pop retail stores have been hit. Some stores were nearly picked clean of any merchandise of any major value.

Buffalo Police Commissioner Joseph Gramaglia acknowledged during a press conference that officers had responded to several reports of looting and that arrests had been made.

“People who are out looting when people are losing their lives in this harsh winter storm is just absolutely reprehensible,” Buffalo Mayor Byron Brown said during the press conference. “I don’t know how these people can even live with themselves, how they can look at themselves in the mirror. They are the lowest of the low.”

The liberal media have absolutely ignored the looting in Buffalo. My best guess is that New York is a leftist state with a leftist governor, so they don’t want to highlight an embarrassment for people who share their same mindset.

In one news conference, Gov. Kathy Hochul and Erie County Executive Mark Poloncarz were asked about the looting, and they would say only that a few incidents of looting have been confirmed. New York State Police Superintendent said at the same meeting, “We have had two confirmed reports of looting incidents where law enforcement has been dispatched and responded.”

The Great Buffalo Blizzard of 2022 ends a year with massive fires, a deadly hurricane in Florida, 1,000-year floods, and a major war in Europe. These are just some of the sighs that Jesus spoke as being the warning of the rapture’s nearness.

“And Jesus answered and said unto them, Take heed that no man deceive you. For many shall come in my name, saying, I am Christ; and shall deceive many. And ye shall hear of wars and rumours of wars: see that ye be not troubled: for all these things must come to pass, but the end is not yet. For nation shall rise against nation, and kingdom against kingdom: and there shall be famines, and pestilences, and earthquakes, in divers places. All these are the beginning of sorrows” – (Matthew 24:4-8).