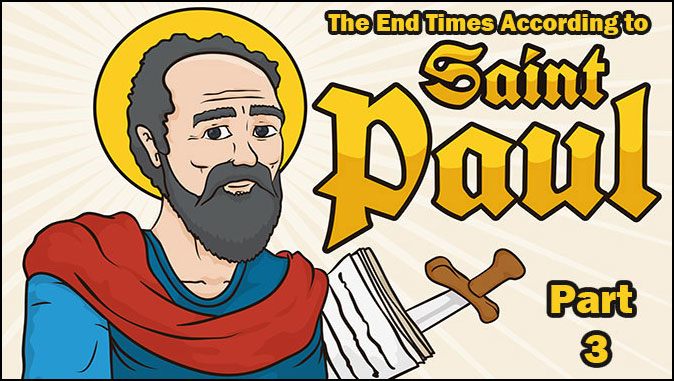 The End Times According To Paul, Part 3 – 2 Thessalonians
By Jack Kelley

Between the two letters we call 1st and 2nd Thessalonians something happened that nearly scared the recipients right out of their socks! They received a letter that appeared to be from Paul but was in fact a forgery. Confused and frightened, they dashed off a hurried request for clarification since this new letter contradicted what he had taught them.

“God is just,” Paul responded, “He will pay back trouble to those who trouble you and give relief to you who are troubled, and to us as well. This will happen when the Lord Jesus is revealed from heaven in blazing fire with his powerful angels. He will punish those who do not know God and do not obey the gospel of our Lord Jesus. They will be punished with everlasting destruction and shut out from the presence of the Lord and from the majesty of his power on the day he comes to be glorified in his holy people and to be marveled at among all those who have believed. This includes you, because you believed our testimony to you.” – (2 Thes. 1:6-10)

Explaining that someone had obviously played a mean trick on them and that the Lord would punish whoever it was for it, he then chided them for being so easily taken in.

“Concerning the coming of our Lord Jesus Christ and our being gathered to him, we ask you, brothers, not to become easily unsettled or alarmed by some prophecy, report or letter supposed to have come from us, saying that the day of the Lord has already come.” – (2 Thes. 2:1-2)

Here we get an extraordinary insight into the sequence of End Times events that Paul had taught them. Receiving word that the Day of the Lord had come would have upset them only if they’d been led to believe that the Rapture of the Church would precede the Great Tribulation. Think about it. From any other view, this kind of news would have been greeted with a certain amount of joyous anticipation. Sure the next few years would really be rough, but whether by martyrdom or survival they would soon be in the presence of the Lord forever. But from the pre-trib perspective, hearing that the Day of the Lord had come would be horrifying, because it would mean that they had missed the rapture. And that would mean that they weren’t saved. No wonder they wrote Paul for clarification!

It’s important to understand that they had asked Paul two questions. The first concerned the Day of the Lord (Day of Christ) and the second was about our being gathered to Him, the Rapture. These are two separate events. Paul answered the 2 questions in that order using verses 3-5 to describe conditions that would bring about the Day of the Lord and verses 6-8 to explain when the rapture would occur in relation to them.

“Don’t let anyone deceive you in any way, for that day will not come until the rebellion occurs and the man of lawlessness is revealed, the man doomed to destruction. He will oppose and will exalt himself over everything that is called God or is worshiped, so that he sets himself up in God’s temple, proclaiming himself to be God. Don’t you remember that when I was with you I used to tell you these things?” – (2 Thes. 2:3-5)

Confirming and amplifying Daniel’s 70 weeks prophecy (Daniel 9:27) and the Lord’s own words in the Olivet Discourse (Matt. 24:15), Paul pegged the beginning of the Great Tribulation to the moment the antichrist stands in the Temple in Jerusalem proclaiming himself to be God.

“And now you know what is holding him back, so that he may be revealed at the proper time. For the secret power of lawlessness is already at work; but the one who now holds it back will continue to do so till he is taken out of the way. And then the lawless one will be revealed, whom the Lord Jesus will overthrow with the breath of his mouth and destroy by the splendor of his coming.” – (2 Thes. 2:6-8)

Before the antichrist can be officially revealed, One who is currently limiting the power of lawlessness has to be taken out of the way. The phrase “out of the way” literally means out of the midst, or from amongst. Some force that restrains (literally: holds back, or hinders) the power of evil within certain predetermined limits (for this power is already evident on Earth) has to be removed.

Scholars who read the passage literally identify this force as the Holy Spirit. And since the Holy Spirit is sealed within us, if He’s taken out from amongst the people of Earth, we have to go too. You can’t take the Restrainer without taking the container, as someone has said. This is the Rapture of the Church, and once we’re gone the power of evil will be free from restraint and all Hell will break loose on Earth. God will respond by pouring out the full measure of His wrath against the anti-Christ and his followers (Rev. 6-18). Paul confirmed this sequence in Romans 5:9, 1 Thes. 1:10, and 1 Thes 5:9 saying we would be rescued from the time of God’s wrath because we are not appointed to suffer wrath.

Here then is the sequence. Before the Day of the Lord can come, the antichrist has to be revealed, and before he can be revealed the church has to be raptured. So according to Paul the next prophetic event concerning believers will be our own disappearance. No prior notice, no precedent condition to fulfill; a clear presentation of the Doctrine of Imminence. (We’re primarily interested in prophetic events concerning Israel and the End times to try and judge how close we are to our own next event.)

Now, just to further inform them, Paul added detail to the antichrist’s revealing. “The coming of the lawless one will be in accordance with the work of Satan displayed in all kinds of counterfeit miracles, signs and wonders, and in every sort of evil that deceives those who are perishing. They perish because they refused to love the truth and so be saved. For this reason God sends them a powerful delusion so that they will believe the lie and so that all will be condemned who have not believed the truth but have delighted in wickedness.” – (2 Thes 2:9-12)

Nicodemus once said that he believed Jesus was the Messiah because no one could perform miracles such as His unless God was with him. (John 3:2) In a sense he was right. No one in Israel had ever seen sight given to a man born blind, for example. (John 10:32-33) But don’t believe in Jesus because of His miracles. As the passage above makes clear, miracles can be used to deceive people. Believe in Jesus because every important detail about Him was foretold in prophecy before being fulfilled in His life.

It’s important to note that the reason people will perish in those days is not because they never heard the truth. No, they’ll perish because they refused to embrace it. Having hardened their hearts against the truth of the Gospel, they’ll be fair game for the lies of the devil. And as He often does the Lord will actually orchestrate events so that those who’ve rejected Him can experience the full consequences of their choices. There will be no gray area, no middle ground to hide in. The power of evil will be free to deceive people in ways we haven’t even begun to imagine.

According to tradition, Paul had poor eyesight. Some think it was a consequence of being struck blind on the Damascus Road, while others blame a disease he contracted. To make his life easier and his letters more legible, he often dictated them to an assistant who wrote them down. One consequence of this was that it made the earlier forgery easier to pull off. To make sure the Thessalonians knew this letter was authentic and not another forgery, after some closing instructions on living the Victorious Christian Life, he signed it with his own hand.

And so in these two letters Paul showed the church what’s going to happen to us in the latter days, allowing us to add these things to the Lord’s briefing to Israel in Matt. 24 for a complete picture of End Times events. Also, for the first time it could now be clearly demonstrated how the Lord would fulfill His promises to Israel AND the Church.

Sometime before the antichrist is revealed, triggering The Great Tribulation, the Lord will make a surprise visit here and secretly whisk the Church off to Heaven to be hidden from this awful time. After He’s defeated His enemies He’ll complete His promised 2nd Coming to begin His Millennial reign, bringing us back with Him. He’ll make Israel the world’s pre-imminent nation once again, capital of His Kingdom and center of world government (Isaiah 2:1-5). And as God returns to dwell in the Temple there, the Church will inhabit the New Jerusalem in fulfillment of all that’s been promised both groups.