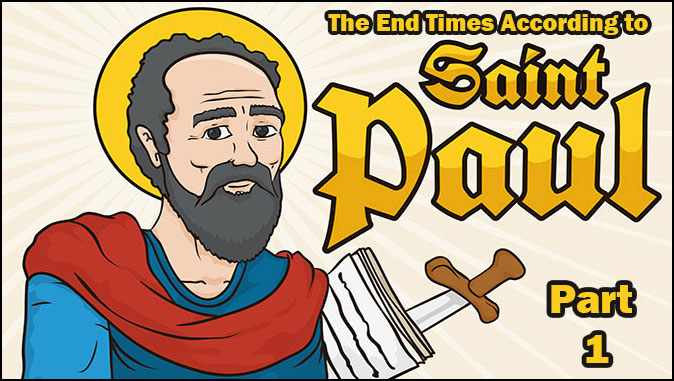 The End Times According To Paul, Part 1 – 1 Thessalonians 1-3
By Jack Kelley

It’s important to understand the differences between Jewish and Christian Eschatology. Israel was promised that one day God would return to dwell with them forever in the land He had given them (Ezekiel 43:7). The Church was promised that we would go to heaven to dwell with our Lord Jesus forever. (John 14:1-3) Because the Bible can’t contradict itself both promises have to come true.

Just as the Olivet Discourse is focused on the 2nd coming, Paul’s two letters to the Thessalonians reference the 2nd coming in each chapter, for an average of once every 13 verses. The difference is that Paul’s letters feature an event that doesn’t appear anywhere in the Olivet Discourse, the Rapture of the Church. It was the first public disclosure of an incredible secret God had kept to Himself since the very beginning of time, and it’s this difference that enables both Jewish and Gentile eschatology to come true.

The Thessalonian letters were Paul’s very first, written in 51 and 52 AD from Corinth. Paul had spent only 3 weeks in Thessalonica, since his teaching there had caused a riot soon after his arrival. A group of malcontents, hired for the purpose, stirred up the crowds by publicly accusing Paul of preaching against Caesar. One thing led to another and Paul had to leave under cover of darkness (Acts 17:1-10).

But in that 3 weeks Paul had taught believers there the doctrines of salvation and sanctification, the Trinity, the nature of man, the assurance of pardon and of course, the End Times. His two letters were meant to under gird these teachings and to answer questions the Thessalonians had raised about the Day of the Lord. In this commentary we’ll focus primarily on his answers to their prophecy questions.

Paul’s first hint that the Church will be rescued from the End Times judgments, called the Great Tribulation by the Lord, (Matt. 24:21) comes in the very first chapter of the letter and illustrates another major difference between Jewish and Christian eschatology. Christians may argue over the timing of our rescue but at least we’re promised one. In the Olivet Discourse the most the Lord could say to Israel is that for the sake of His elect He would put a stop to things before they destroyed every last person on the planet. (Matt 24:22).

“And so you became a model to all the believers in Macedonia and Achaia. The Lord’s message rang out from you not only in Macedonia and Achaia – your faith in God has become known everywhere. Therefore we do not need to say anything about it, for they themselves report what kind of reception you gave us. They tell how you turned to God from idols to serve the living and true God, and to wait for his Son from heaven, whom he raised from the dead – Jesus, who rescues us from the coming wrath.” – (1 Thes. 1:7-10)

By using the Greek word apo in the phrase translated rescues us from the coming wrath, Paul selected a preposition that literally means “to keep away from the time, place or any relation to” the Great Tribulation. (Please remember “the wrath” arrives on Earth in Rev. 6:16-17, well before the Great Tribulation officially begins.)

As I’ve stated before, the Great Tribulation (called the Time of Jacob’s Troubles in the Old Testament) serves two purposes:

1. to completely destroy all the nations among which the Jews have been scattered, and

The Church, having been purified at the cross, has no business there and here’s the first of several promises Paul makes that we won’t be.

Where Did He Come From?

Paul had come to Thessalonica from Philippi where he had been mistreated in a most humiliating way. Having been dragged before the magistrates for exorcising a demon from a slave girl, and then beaten and imprisoned without trial in violation of Roman law, he was finally released and sent out of town. But though his time in Thessalonica was also cut short, his preaching there had been joyfully received and its impact on the Thessalonians was a witness to congregations all around.

Thessalonica was the capitol of Macedonia with about 200,000 residents. It was located at the strategic intersection of the Via Egnatia, the major east-west thoroughfare through Greece, and the north-south highway that led to the Danube and Eastern Europe. As a result travelers from all over the region passed through and felt the influence of the new Christian community there. For this reason Paul felt a special bond with them. “For what is our hope, our joy, or the crown in which we will glory in the presence of our Lord Jesus when he comes? Is it not you? Indeed, you are our glory and joy” – (1 Thes. 2:19-20).

Though he couldn’t return to Thessalonica himself, Paul had sent Timothy to find out how they were doing, and in his letter told them how encouraged he was by Timothy’s favorable report. “How can we thank God enough for you in return for all the joy we have in the presence of our God because of you?” He asked. “May he strengthen your hearts so that you will be blameless and holy in the presence of our God and Father when our Lord Jesus comes with all his holy ones.” – (1 Thes. 3:9,13)

Here’s another clue as to what’s in store for the Church and when it’ll happen. Paul’s prayer that they would all be in the presence of our God and Father when it was time for the Lord Jesus to return is a clear hint that the church will be removed from Earth and taken to Heaven sometime prior to the 2nd coming.

And so in the first three chapters of the letter, Paul has referenced the 2nd coming three times, two of which also give clear indication that the Church will be rescued from the time, place, and any relation to the judgments that precede it. All of this is leading up to his blockbuster announcement of the Rapture of the Church, which we’ll cover in our next installment. See you then.