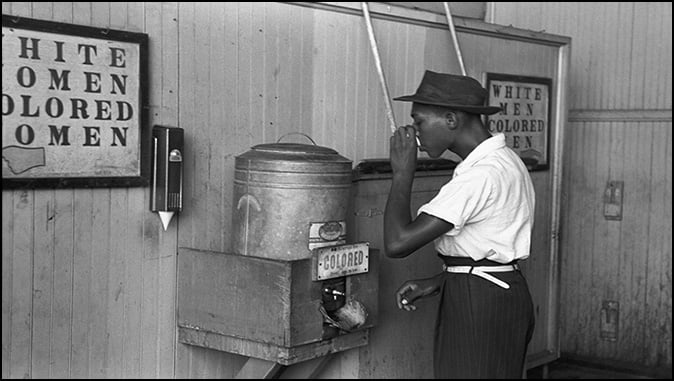 The Cure for Racism
By Nathan Jones

Nathan Jones: Jesus prophesied that in the end times there would be ethnos against ethnos — race against race. With all the anti-racism riots going on here in the United States, have we reached that end times sign? I’ve brought my good friend and fellow evangelist, Don Perkins of According to Prophecy Ministries, to help answer that question.

Don, Jesus prophesied in Matthew 24:7 that in the last days it would be nation against nation, which we know in the original Greek was ethnos versus ethnos, or race versus race. In other words, one of the signs of the end times would be a rise in racism. Don, I’d like to know if you believe that an increase in racism is a sign of the end times?

Also, can we find a cure for racism? For instance, Black Entertainment Television’s (BET) president Robert Johnson says the cure to racism is $14 trillion dollars in reparations. Are reparations the answer, or does the answer go much deeper?

Don Perkins: The answer goes a whole lot deeper. As a matter of fact, the crux of the matter concerning racism is sin. Racism is a sin problem. You cannot throw enough dollars at this problem to fix it. The only way the problem of racism can be solved is by accepting Jesus Christ. Jesus is the remedy for racism.

We’ve got racism across all the different ethnos’ and nations. There’s racism everywhere. There’s racism between black and white and black and other ethnicities and so on, so racism is everywhere. What I’ve found out is that a lot of people are racists themselves, even those who try to complain about it. A lot of these social justice warriors are racists themselves. They have not allowed the blood of Christ to touch their hearts.

I’ve personally seen racism in every race. And, I’ve seen the cure to that is Jesus Christ. We won’t see true peace in the land until the true Messiah sits on the throne. Again, I’ve met people who are true racists, but when they met Christ, I saw a change of heart. I’ve seen them change from the racism in their hearts to have their hearts become filled with the love of God. It’s amazing to see the love of God develop once their hearts are given over based on their walk with God. So, racism needs a change of heart. And again, it only comes through Jesus Christ.

Truly, though, these race riots are a definite sign of the end times. As we witness the chaos that is going on in the streets today, it’s truly a latter-day sign pointing to the return of Christ.

Nathan Jones: Don, you keep hearing the Media and crowds claim that the United States is a “racist country” and that we have “systemic racism.” As you said, what race doesn’t have their racists? I like to think that we are all part of the human race, but then there will be people who will call me a racist for saying that, which in and of itself is a racist statement, so there’s no end to it.

Can you imagine what a world this would be like if we in a culture that has forgotten God remembered God, and we loved God, and showed God’s love to other people? Did Jesus just provide us with the answer to racism?

Don Perkins: Sure, the love of God is the cure. Something that we can definitely look forward to that’s taught in Bible prophecy is what the world will be like entering into the Millennial Kingdom and further on into the Eternal State. Then we will experience first-hand this unconditional love that God showed by sending His Son to die for humanity’s sins.

We know that back in Genesis 4:8 the first murder occurred when Abel was killed by his brother Cain. Hatred of his brother came in which became the forerunner or a type of racism, because likewise, Cain hated his brother and what he did. Today, what we have in the streets is hatred among black and white and different other races who are really all brothers and sisters.

When it comes to “systemic racism,” the problem is that humanity does not have Jesus Christ. I’ve met black racists; I’ve met white racists; I’ve met Filipino racists. It seems like I’ve met every racist under the sun. So, all humanity has a sin problem and the only way that’s going to be resolved is by accepting Jesus Christ as Savior. That’s the only way! I know I love everybody, but that’s because of the love of Jesus working in and through me.

Nathan Jones: Beautifully said, Don! I think of the Church as supposed to be a little bit of Heaven on earth. I love that our church is multiracial. We look at each other as people. We don’t look at each other as skin color. And, that’s what Heaven is going to be like. Races won’t matter anymore. After all, we’re supposed to look like ourselves in Heaven, right, so that means we’re still going to be the same color that we are now for all of eternity. We’ll all be once race, and there won’t be any hate.

Don Perkins: We will become the family of God.

Nathan Jones: Thank you, Don, for clearing that up. Folks, if you are looking for a cure for racism, Don said it. It’s the love of God, it’s compassion for other people, and it’s forgiveness. It’s time to forgive each other. When you have those three things, you have the cure for racism.

End Times Chronology: Timing of the Seal Judgments By Nathan Jones In the chronology of…

The Prepping of Society for the Antichrist

The Prepping of Society for the Antichrist By Jonathan C. Brentner When 2020 began, who…

End Times Chronology: Timing of the Gog-Magog War By Dr. David Reagan In the chronology…