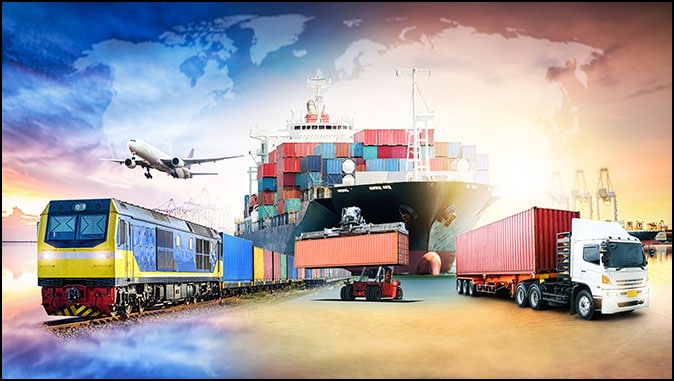 On November 11, a record 111 container ships were anchored off the coast of two California ports. This broke the previous record set just 20 days earlier. In response, Joe Biden promised to strengthen the resiliency of the supply chain by moving to 24/7 operations at the Ports of Los Angeles and Long Beach. The Biden administration is concerned about the Christmas shopping season and public opinion in an era of product shortages and rising inflation. But this is about more than just making sure shelves are fully stocked for Christmas. The problems involving bottlenecks in these ports are a symptom of a much larger systemic breakdown – a breakdown that threatens to collapse the entire global economic system.

Despite the optimistic forecasts of politicians, the broken supply chain won’t repair itself any time soon. Its problems will carry on well into 2022 and beyond. President Biden can push for 24/7 port operations, but he knows this won’t fix the problem. These promises are nothing but a public relations campaign to make voters think he’s “doing something.” Containers cover every square inch of these ports. Before new containers can be offloaded from ships, trucks and trains need to move the existing containers to new locations. The nationwide shortage of truck drivers makes that a tall order. And the problem isn’t confined to California ports alone. Supply chain problems and shortages plague almost every industry and factory in the world, covering a wide range of products such as bacon, semiconductors, toilet paper, aluminum, pet food, juice boxes, and a host of other items. Why is this? And what does it mean going forward?

When COVID first struck in early 2020, the global economy came to an abrupt halt. We’re now experiencing the trauma from that high speed crash – and the damage is massive. The sudden collapse in global demand led to negative oil futures prices in April 2020. This caused energy producers around the world to cap production. Now that demand is returning, producers can’t simply increase production overnight. So demand has increased much faster than supply. Fast forward to late 2021, and we’re facing the consequences.

Natural gas prices in the United Kingdom are triple what they were just five months ago. Meanwhile, Vladimir Putin is holding much of Europe hostage as they’ve allowed themselves to become dependent on his energy supplies. In China, coal generates 50% of the nation’s electricity, and coal is becoming harder and harder to source. All this means one thing – higher energy prices, and higher costs for businesses and consumers. It also means energy shortages and rolling blackouts. These energy disruptions result in additional production shutdowns and manufacturing bottlenecks, further compounding global supply chain problems.

The Whole System Could Breakdown

The constant disruptions from COVID shutdowns, energy disruptions, and shortages of key manufacturing inputs creates a vicious feedback loop that only makes the problem worse. For example, let’s take the following example:

Widget A + Widget B = Widget C

What happens when an electricity blackout at an overseas factory leads to a shortage of Widget A? The answer is clear. Widget C can’t be made. Since Widget A is a key component necessary to make Widget C, no one can make Widget C. Now the world has a shortage of both Widget A and Widget C. And this too makes the problem worse.

Can you see how the current supply chain disruptions could morph into a catastrophic failure? This type of destabilization could result in widespread shortages of everything, including food. This will lead to massive social unrest. As the old adage says, “Fear not the angry man, but the hungry man.” Hungry people launch revolutions. Because of this, they’re a threat to those in power. So what’s the best way for politicians and heads of state to distract from such problems? History says it’s war. War is often the result of trade disruptions, shortages, and/or resource scarcity. This means we live in extremely dangerous times.

For the moment, these supply chain issues may seem like minor inconveniences in your day-to-day life. But they illustrate just how fragile our global economic system is. Just-in-time delivery provides an efficient, cost effective global supply chain system when everything works the way it’s supposed to. But when unexpected events take place, the whole system falls apart.

What happens when grocery stores experience more than just a sporadic shortage of specific products? What happens when food itself is in short supply? When that happens, we’ll also find out how fragile society itself is. Imagine if New York City (or any large urban area) ran out of food. How do you think people will react? What do you think politicians will do to divert attention from such a crisis?

The world is already on the verge of a major military conflict. Right now, Russia is gathering troops on the border of Ukraine. China is running daily combat exercises to prepare for an invasion of Taiwan. Israel regularly bombs targets in Syria – a nation where Russia, Turkey, and Iran all have an active military presence.

While people long for a return to “normal,” it won’t happen. We’re in the last waning days of a dying world order. Soon, we’ll have a catastrophic breakdown of the current global system. The world will erupt into war just like Europe did in 1914. When the dust settles from World War III, a new world order will emerge. What will it look like? I believe it will look like the one outlined in Chapters 6 thru 13 of the Book of Revelation.

Why? Because Jesus said so. He said when you see all the signs He and the prophets said to look for, you should look up (Luke 21:28). We see those signs now. Their convergence tells us His return is close at hand. Some of those signs are:

So what does this mean? It means now is the time to point out these signs to others and warn them of what’s coming. If you’ve been waiting to share the Gospel with someone, don’t wait any longer. Jesus is coming, and He’s coming soon. The signs are all around us.