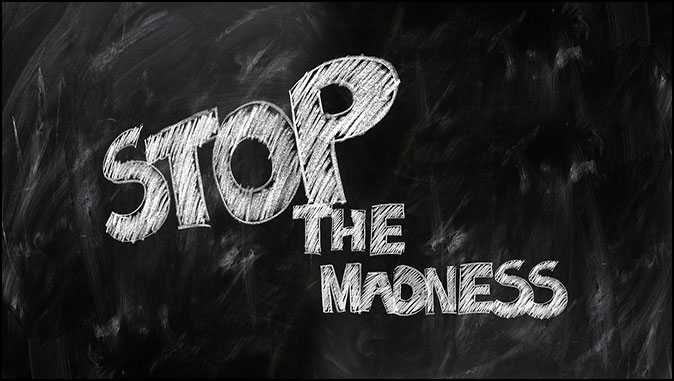 Stop the Madness
By Terry James

The lockdowns are again being initiated by those willing to follow the dictates of those I would like to say are just mistaken in their zeal to keep America healthy. I know better.

We as a people are beginning to come under the delusion of the master planner—and I’m not meaning the Dr. Faucis of the bureaucratic, inside-the-Beltway elite of the medical establishment—those of the CDC and the like. The master planner is the old serpent, Lucifer the fallen one. Of this I am absolutely convinced.

One can viscerally sense that the rage against the founding of this nation—against the principles that undergird America—is increasing, not lessening, day by day.

Again to keep harping on the matter, I guess, America is the chief holdup to Satan getting the platform from which to launch his man of sin, the first beast of Revelation 13. This nation is, somewhat like the Church (all born-again believers) the only thing standing between the devil and his being able to wage total war on mankind—particularly on God’s chosen people, the Jews.

Now, I’m not equating America with the Church in the spiritual sense. The nation is, I simply mean, the physical manifestation—the nation-state—that represents a roadblock to Lucifer’s plan to bring in the Antichrist regime.

The Church, indwelt by God the Holy Spirit, is the spiritual entity that blocks the devil’s ultimate plan to overrule God’s governance upon this fallen planet.

Against this spiritual entity, the Church, Satan and the gates of Hell will never prevail. That is a promise in God’s Holy Word.

But he will overcome all nations and (in the sense of physical death) even the Tribulation saints under the leadership of history’s last and most terrible tyrant (see Revelation 13).

America, too, will be overcome. The process is in full-blown fury. The plan of the devil can be delayed, but it can’t be stopped. America as it was founded will not survive the onslaught we are witnessing. It will be overcome, just like all other nations and peoples.

The Church is the greatest blocking mechanism against Satan’s drive to bring his evil one to earth’s throne of absolute control. The United States is still in place to be the national entity that is preventing the globalist agenda from coming to fruition. And it is the globalist agenda that Lucifer is counting on to provide the platform for bringing his man, Antichrist, to the stage for the final play of this great, end-times drama.

It is the Church of Jesus Christ that has been instrumental in God’s keeping America in place in order to block the globalist drive. God’s people offering the prayer of 2 Chronicles 7:14, I believe, is what turned the globalist agenda aside in the presidential election of 2016.

Even mainstream pundits, through their meltdown on election night, considered it a near miracle that their candidate lost and a “show-biz nothing” won. It was more like a nightmare to them, but it was indeed a miracle for all who love and cherish America as founded.

We have witnessed that insane rage we’ve written about so much each and every news-cycle hour since that election. The rage hasn’t abated, but has grown exponentially more virulent.

Now the assault has us wearing masks and cringing in fear of a microbe (if that’s what a virus is) that is, in fact, less deadly than strains of the flu experienced each year. Basically, one doctor of the CDC has, in consort with the so-called Deep State, dictated to the entire American populace that we must stop going to work, school, restaurants, and church. It is all to bring America into the orbit of the globalist order. American elections have to be overruled, and the way that will be done from the perspective of Satan’s globalist minions in high places is to make you and me vote out the man God obviously put in place on 2016 to delay their plans.

“It’s the economy, stupid,” is the mantra Democrat operative James Carville created during the Bill Clinton years. The slogan worked.

If they can convince voters that the economic coming-apart of America is Donald J. Trump’s fault, their mission of getting rid of him as a roadblock to their plans will be accomplished.

So we have the masks to remind us of just how the Trump years have caused us grief. It is the physical manifestation of the pandemic gulag that they, themselves, have perpetrated, and think they have convinced us to blame Trump.

I received an email from a Rapture Ready website friend who is fed up with the minions of the assault on America that is getting more vicious by the day. She wrote the following.

The word “ENOUGH” is a protest word. It is a conversation starter of “God is enough,” “Enough lies,” “Enough shut down.”

The enemy has stolen the “I can’t breathe” to be a protest. I would write that on my face mask because I literally cannot breathe under it.

We need to protest effectively.

We can write it on our face masks without triggering people, but allowing a conversation.

Please help me spread this message.

Well, Shelly, it’s a great idea, to be sure. One of these days soon, though—perhaps today—the Lord will say “Enough is enough,” and will shout, “Come up here!” The Church will no longer be that Body on earth the Restrainer indwells. Satan will install his wicked order on this doomed planet.

Meantime, I prefer to fight the evil going on with something stronger.

Let’s take off the masks altogether so the Lord can read our lips as well as our hearts. Let’s again say “Enough is enough” with words of repentance, in unison, lifted toward the throne as instructed by the God of Heaven.

“If my people, which are called by my name, shall humble themselves, and pray, and seek my face, and turn from their wicked ways; then will I hear from heaven, and will forgive their sin, and will heal their land.” (2 Chronicles 7: 14)