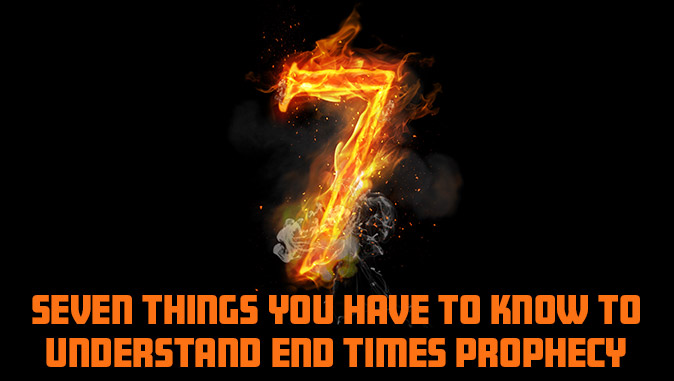 With all the killer storms, earthquakes, wars and disease dominating our news, it’s not surprising that recent studies indicate a ballooning interest in End Times Prophecy. Even non-believers are wondering if the end is near. What is surprising is how little most Christians actually know about prophecy, especially since it comprises about 40% of the Bible’s content, more than any other topic.

With few exceptions seminaries don’t teach it, so preachers don’t preach it. And therefore Christians don’t learn it. In all my years as a denominational Christian, I never once heard a message explaining the importance of prophecy to a believer’s walk with the Lord. And yet the Bible devotes more space to End Times Prophecy than it does to all the teachings of Jesus.

When Christians are asked why they don’t study prophecy more seriously the most common reasons given are 1) because it scares them, and 2) because it confuses them. Both responses are borne out of a lack of understanding. For the believer, prophecy is neither scary nor confusing but the key to understanding God’s plan for man.

Seven Things You Have To Know

There are seven pieces of information that are essential to understanding End Times Prophecy. They’re the building blocks for the strong foundation we want. Once you’ve learned them, these seven things will help you avoid the mistakes that have thrown others off the track. Call it perspective or overview or whatever you want, this combination of facts will give you the ability to put all the prophetic verses in the Bible into their proper context.

1) The Sequence Of Major Events

First is knowing what happens and when. It gets really confusing if you don’t know the sequence in which major End Times events will occur. Actually their order is very logical, and once you learn it, you’ll wonder why you didn’t see it before. The best way to figure it out is to perform what the business world sometimes calls a back scheduling exercise. It involves going to the very end of a process and identifying the final outcome. Then you list in reverse order all the things that have to happen to produce that outcome, backing into the present. It’s simpler than it sounds, and much simpler in prophecy than in business because there are many fewer events to organize. Let’s do it.

What Are We Waiting For?

We all think of Eternity as the final outcome, and so starting at the end and working backwards means we begin there. But the last major event described in any detail in the Bible is the Kingdom Age or Millennium, the Lord’s 1000 year reign on Earth, which is distinguished from and precedes Eternity. The very last chapter of Revelation describes trees on either side of the River of Life bearing a different fruit every month. That means time still exists, and Eternity by definition is the absence of time. We’ll talk more about that later. For now let’s just say that Eternity can’t happen till the Millennium is over.

So the Sequence of Major Events is this:

The Rapture of the Church,
The Battle of Ezekiel 38,
Daniel’s 70th week begins,
The Great Tribulation,
The 2nd Coming,
The Millennium,
Eternity.

To those who read Scripture as it’s written only two of the events in this sequence are subject to debate as to timing. Those are the Rapture and the Battle of Ezekiel 38, the first two on our list. So lets find out why they have to be where I’ve placed them in the sequence. Maintaining our back schedule mentality, we’ll begin with Ezekiel’s battle and work back to the Rapture.

“And I will set my glory among the nations, and all the nations shall see my judgment that I have executed, and my hand that I have laid on them. The house of Israel shall know that I am the LORD their God, from that day forward.

Then they shall know that I am the LORD their God, because I sent them into exile among the nations and then assembled them into their own land. I will leave none of them remaining among the nations anymore. And I will not hide my face anymore from them, when I pour out my Spirit upon the house of Israel, declares the Lord GOD.” (Ezek 39:21-22, 28-29)

The Lord has declared in no uncertain terms that He’s going to use Ezekiel’s battle to spiritually awaken His people and call them to Israel from all over the world. This will result in the re-instatement of their Old Covenant relationship, reviving Daniel’s long dormant “70-Weeks” prophecy for its final seven years and requiring that a Temple be constructed. Without one there’s no way for them to keep His covenant. (If you’re not familiar with Daniel’s “70 Weeks”, click on the link at the end of this article.)

This was proven once before in history during the Babylonian captivity. When Nebuchadnezzar destroyed the 1st Temple, Israel ceased to exist. But as soon as Cyrus the Persian defeated Babylon and freed the Jews, they returned to Israel and began building a Temple before they did anything else. Without a Temple there’s no sacrifice for sin, and without that sacrifice, Jews cannot approach God.

Both the Old and New Testaments refer to a Temple in Israel at the End of the Age. The only reason for a Temple is to perform Old Covenant ordinances. But building one today would cause such an uproar that no one in his right mind would consider it. Jews don’t want one, since only one out of four is religious and even religious Jews are divided on the issue. And it goes without saying that Moslems would go to war to prevent it.

Only a unified demand from the people of Israel accompanied by quiet acceptance from their Moslem neighbors would make the construction of a Temple even thinkable. Sound impossible? Ezekiel’s battle results in both a Jewish nation re-awakened to the presence of God and an utterly defeated Moslem attack force in no position to resist. The perfect conditions will finally exist to start building. For these reasons, Ezekiel’s battle has to take place on the threshold of Daniel’s 70th week. Now why does the Rapture of the Church have to precede Ezekiel’s battle?

“They will fall by the edge of the sword and be led captive among all nations, and Jerusalem will be trampled underfoot by the Gentiles, until the times of the Gentiles are fulfilled.” (Luke 21:24)

When Jerusalem became a Jewish city again in 1967, it was a signal that the era of Gentile Dominion, begun with Nebuchadnezzar and Babylon, was finally coming to an end. For 2500 years, gentile nations had been running things on Earth, but now events would begin to draw Israel to the forefront once again.

“Lest you be wise in your own conceits, I want you to understand this mystery, brothers: a partial hardening has come upon Israel, until the fullness of the Gentiles has come in.” (Romans 11:25)

Reborn first in unbelief (Ezek. 37:8) Israel would remain partially estranged from God until the gentile Church reached its full complement (predetermined number) and arrived at its destination. (The Greek word translated “fullness” was a nautical term often used to describe the full complement of crew and cargo necessary to accomplish a ship’s mission. The ship couldn’t sail till those requirements were met. The one translated “come in” means to arrive at a designated place.)

Then the veil would be pulled back as God revealed Himself to them again. As we saw above, He will use Ezekiel’s battle to begin this by renewing the Old Covenant with them, later transitioning Israel from the Old Covenant to the New during the Great Tribulation. (Zech 12:10) Remember, if they didn’t go back to the Old covenant first, they wouldn’t need a Temple. He’s picking them up where they left off.

After they finished speaking, James replied, “Brothers, listen to me. Simeon has related how God first visited the Gentiles, to take from them a people for his name. And with this the words of the prophets agree, just as it is written, ‘After this I will return, and I will rebuild the tent of David that has fallen; I will rebuild its ruins, and I will restore it, that the remnant of mankind may seek the Lord, and all the Gentiles who are called by my name, says the Lord, who makes these things known from of old.'” (Acts 15:13-18)

It was about 20 years after the cross. The controversy of the day was whether Gentiles had to become Jews before they could become Christians. And if not, what would become of Israel? The Lord’s brother James explained to the Apostles and others present at the Council of Jerusalem that Israel was being temporarily set aside while God focused on the Church. After He had taken this “people for His name” (Christians) from among the Gentiles he would return and rebuild His Temple. The passage implies that He would take the Church somewhere and then come back to rebuild the Temple, restore Israel, and give what’s left of mankind one final chance to seek Him.

These three Bible prophecies make it clear that once Jerusalem became a Jewish city again, God would begin preparing Israel to be His once more. But He wouldn’t be exclusively focused on them until He was finished building the Church and had taken us to our appointed place. And where is that? “In my Father’s house are many rooms; if it were not so, I would have told you. I am going there to prepare a place for you. And if I go and prepare a place for you, I will come back and take you to be with me that you also may be where I am.” (John 14:2-3) (He didn’t promise to come back to be with us here, but to take us there, where He was.) After that He would see to Israel’s reawakening and the construction of their Temple.

Throughout Scripture, the Lord seems to be involved with either Israel or the Church, but never both at the same time. James bears this out in his pronouncement regarding the Church in Acts 15. All the leaders of the early church now knew that once God had accomplished His goals with the church, He would turn again to Israel.

For this reason, the rebirth of Israel in 1948 and the reunification of Jerusalem in 1967 are seen as the most important signs of all that the End of the Age is upon us. The Sequence of Major Events is only the first of “Seven Things You Have To Know To Understand End Times Prophecy.” Next time we’ll look at some more of them.