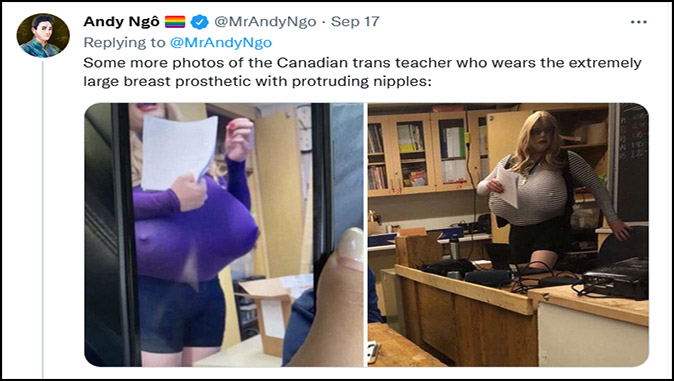 Toto, I’ve a feeling we’re not on Earth anymore.

By now many Americans have heard — or worse, seen — photos of the male shop teacher in Ontario, Canada who sports mammoth mammaries with erect nipples in skintight tops to class. The mentally ill and morally degenerate teacher goes by his new name, Kayla Lemieux, and he now sashays around school in a drag queen-like costume with wig, womanface, and women’s clothes. It is a grotesque and insulting caricature of women and surely a fetish. I guess mocking women and appropriating womanhood is now a leftist virtue.

The Toronto Sun reports that the Halton District School Board (HDSB) headed up by Margo Shuttleworth, supports the fetishist/teacher/pretend-woman:

Protecting any persons “gender rights” is “the stance the school board is taking and they are standing behind the teacher.”

Would these administrators defend the right of a cross-dressing female teacher to wear a prodigious prosthetic penis to class in skintight biker pants? What about a prodigious erect penis?

What is this strange term “gender rights”? Leftists have emptied “gender” of its earlier meaning, and now it’s a euphemism for the disordered desire to be the sex one is not and to outwardly masquerade as that sex. It appears that when the school board talks about “rights,” they’re talking about socially constructed and imposed school rules that reflect disputed, dogmatic assumptions about “gender.” They’re clearly not talking about objective unalienable rights endowed to humans by our Creator.

Does the HDSB protect only “gender” rights? What about age rights or species rights? Would the district protect the right of a “trans”-agist teacher who self-identifies as an infant and wears a onesie to class? What if a teacher identifies as an animal? Does his right to absolute autonomy, self-definition, and authenticity require the district to allow him to wear a furry costume to class?

Bootlickers for the “trans”-cult who self-identify as reporters are doing what they do best: asking foolish questions. Reporters are asking students for their opinions on the cross-dressing, woman-mocking drag fetishist. Why ask students? Are the thoughts and feelings of minors relevant to an assessment of dress codes or fetishistic classroom behavior by teachers?

Anyone who understands teens knows that they would approve of myriad behaviors that mature and wise adults would find troubling and inappropriate. Teens don’t run schools or establish policies for a reason, and the reason is they lack good judgment, discernment, and wisdom. It’s difficult today to find adults with good judgment, discernment, and wisdom, let alone teens.

This astounding event in Canada evolved ineluctably from the stream of putrid ideas flowing out of the academy, embraced by leftists, and ignored by cowardly or foolish conservatives. Those arguable ideas relate to identity, autonomy, sex/gender theories, and “shaming.”

According to those dogmas, all unchosen, persistent, seemingly intractable feelings or desires — at least sexual ones — are essential constituent features of “authentic identity.” Disapproval of or disagreement with these arguable ideas stigmatizes those who embrace them and may lead to cultural impediments to autonomy and self-actualization. The failure to actualize desires through outward behavior results in life-threatening denial of the self.

If Canadians won’t or can’t give this weirdo the boot, the school should be shut down. If he can’t be given the boot and the school can’t be shut down, then every parent should pull their kids out of that school yesterday.

In this socially constructed dystopia, there is no normal and there is no common or public good. There is only the “authentic” solipsistic self, self-defined by boundary-free sexual drives to which other selves must genuflect even if that means denying their authentic selves. Intellectual coherence means nothing to humans in bondage to distorted, depraved sexual appetites.

How is it possible that all those who see the emperor is wearing womanface, women’s clothes, and women’s breasts have let this happen? They really need to go to the attic, find those dusty spines, and cook up some thicker skin in their basement laboratories. Then, if they see something, say something. And everyone can see that guy’s breasts.