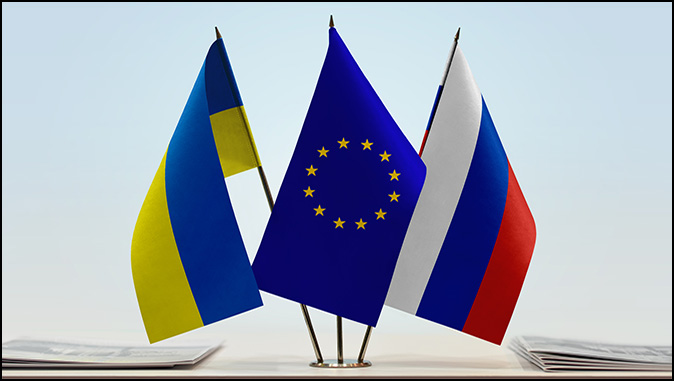 Russia, Ukraine, and the Rise of the European Union
By Britt Gillette

For decades, Christians have speculated on whether or not the European Union is the final world empire outlined in the Bible. The Book of Daniel and the Book of Revelation point to a revived Roman Empire that will appear in the end times (Daniel 7:23; Revelation 17:10). Since World War II, prophecy watchers have paid careful attention to the slow and steady unification of western Europe. The alliance now known as the EU has faced numerous growing pains along the way. These include squabbles over a single currency, trade rules, debt bailouts, Brexit, and hundreds of issues.

The latest infighting centers around the EU’s response to the Russian invasion of Ukraine. While some EU members have called for a complete embargo of Russian oil and natural gas, others have made it clear they will never agree to such restrictions. For example, Germany claims they can move forward with a ban on Russian oil by year end, but Hungary has unequivocally said, “No.” Without Russian supplies, Hungary runs out of energy. Germany does too. The only difference is its leaders continue to delude themselves into believing they can survive with zero Russian energy.

The EU put itself in a terrible position of weakness. Entering 2022, they were dependent on Russia for 30% of their oil and almost half of their natural gas. When the EU supported sanctions against Russia following its invasion of Ukraine, the international banking system cut off Russia’s foreign dollar and euro reserves. This meant if Russia continued to accept dollar and euro payments, they would be trading oil and gas in exchange for worthless currency they couldn’t spend.

So what did they do? Russia demanded payment in either rubles or hard currency such as gold. European leaders threatened to sue for breach of contract. They vowed never to accept such an arrangement and threatened any European energy company that dared to comply. That was last month. Today, dozens of European countries and companies are paying for Russian oil and gas with rubles. The latest is French energy group Engie, whose largest shareholder is the French government.

When it comes to foreign policy, the EU is divided. Each nation continues to operate its own foreign policy. They can’t agree and rarely speak in one voice. To me, this failure to agree is yet another reason to believe some form of the EU will become Daniel’s prophesied final empire. Why? Because this EU characteristic aligns with the empire Daniel describes.

For instance, the Bible says this final world empire will be a kingdom:

Right now, no empire rules the world, much less a global empire of ten nations or ten kings. This means the EU in its present form is not the global empire foreseen by Daniel. However, this doesn’t mean it won’t become that empire. Most likely, it’s an early stage of what will become the Antichrist’s global empire. Why? Again, the EU fits every one of the characteristics outlined above. The Antichrist’s empire will be:

Later, Daniel has another vision. This time, he sees four beasts, each representing a world power that will conquer Israel (Daniel 7). We know the fourth beast is Rome because it conquers the third beast, Greece (Daniel 7:6). But we also know it will come back. Why? Because it “will rule the whole earth” (Daniel 7:23), and it will be ruled by the Antichrist (Daniel 7:24-25). Rome neither ruled the whole earth nor was it ruled by the Antichrist. Also, this empire is yet again described as a ten nation alliance (Daniel 7:20), and the ancient Roman Empire never took the form of a ten nation alliance.

Today, the EU sits on the ashes of the ancient Roman Empire. Ancient Rome occupied nearly every part of the current EU member nations, including Italy – home to Rome itself.

2) A Divided Alliance, Loosely Held Together – The global empire Daniel described will also be divided (Daniel 2:41). It will struggle to hold itself together, just as iron and clay struggle to hold themselves together (Daniel 2:43). Do we see this type of alliance when we look at the EU? Absolutely!

Since its inception, the EU has harbored an odd collection of politicians, governments, economies, currencies, and militaries. From the Schuman Declaration in 1950 to the Treaty of Lisbon in 2007, the rise of the EU has been marked by a struggle to agree on important issues. These include arguments over a single currency (the United Kingdom and Denmark opted out), disagreements over how to handle debt crises (the Greek bailouts), and disputes over open borders (the Syrian refugee crisis). Each step along the way, the EU struggled to survive.

Until recently, Brexit was the latest example. Critics pointed to Brexit as evidence the EU is not the coming global empire. But the exact opposite is true. Brexit is a perfect example of the EU’s struggle to stay together, “just as iron and clay don’t hold together.” Now, the EU’s dividing issue is how to deal with Russia. Arm Ukraine? To what extent? Ban Russian imports or pay for oil and gas in rubles? Yet again, EU member countries can’t agree on a unified policy. It’s the latest example of why the EU is a “divided alliance” (Daniel 2:41). It’s a union of weak and strong nations struggling to bond together (Daniel 2:43), and this is exactly how the Bible described the final world empire.

3) An Alliance of Weak and Strong Nations – As I write this, the EU contains the world’s 4th, 6th, and 7th largest economies (Germany, the United Kingdom, and France). And yes, I’m still counting the UK as part of the EU. When the pro-EU politicians come back into power (which is probably only one election away, given the massive food and fuel inflation we’re seeing), and the UK remains out, then I might concede the UK is no longer part of the EU. Until then, I still count it as part of the EU. The EU also contains the world’s 113th, 114th, and 132nd largest economies (Iceland, Cyprus, and Malta).

Alone, not a single EU nation is a world power. Together, they are the world’s greatest economic power. Combined, their military spending is second only to the United States. In fact, several European politicians have called for an EU army. Don’t doubt it – the EU is a superpower. It’s a revived Roman Empire made up of weak and strong nations. And this is what the Bible says will exist just before Jesus returns.

In a world governed through the use of force, many geopolitical experts say the reality is the EU has become a collection of Russian satellite states. Despite all the grandstanding over Russia sanctions and threats of military force, the cold harsh reality is Europe needs Russia’s fossil fuels. Without Russian oil and natural gas, the lights go out. Industry comes to a screeching halt. Come winter, people freeze. This means, on the world stage, the EU is in a position of weakness. They’re beholden to Russia. They don’t resemble anything close to a world superpower. Therefore, the conventional wisdom says Europe’s power on the world stage is fading and will soon come to an end. But I would argue this is exactly the state the Bible says the final world empire will be in just prior to devouring the world. If the EU is the world empire described in the Book of Daniel, then its current weakness will soon transform into overwhelming strength. But how?

We don’t know for sure how this will happen, but we could be witnessing the seeds of this transformation right now. Ironically, the catalyst for change may very well be the state of weakness the EU finds itself in now. Its failure to speak with a single voice when dealing with the Russia-Ukraine conflict, and its reliance on the U.S. and NATO when it comes to defense have led to calls for the creation of a new executive position to formulate a common EU foreign policy and new calls for the creation of an EU army. In an opinion piece, the foreign ministries of Denmark, the Netherlands, and the Czech Republic called for Europe’s foreign ministers to “give the EU’s new high representative greater leeway to respond to rapid developments when core European values are at stake and allow the EU to become more agile and proactive on foreign policy.”

When the EU finally decides to assert itself on the world stage, it will become a mighty superpower. The Russian invasion of Ukraine has likely moved that day closer to reality. It highlights the weaknesses of current EU institutions. This will likely spur significant change in those institutions.

Look for EU advocates to push for greater unification, particularly in regard to a unified foreign policy backed with the threat of a EU military force. The current disagreements appear to show weakness, but this weakness won’t last. All the volatility we’ve seen so far makes it more likely the EU is an early phase of the alliance Daniel described. It’s the mirror image of the revived Roman Empire the Bible says will appear in the last days (Daniel 2:40-43, Daniel 7:23-24). It’s made up of weak and strong nations (Daniel 2:42). It’s divided against itself (Daniel 2:41), and the effort of these nations to come together and strengthen themselves is volatile and unstable (Daniel 2:43). These bible verses sound a lot like the EU, don’t they? I sure think so. If the current crisis in Ukraine results in a single EU foreign policy and a unified EU military, the EU will take one more step toward becoming the global empire Daniel described. Keep looking up, because Jesus is coming!