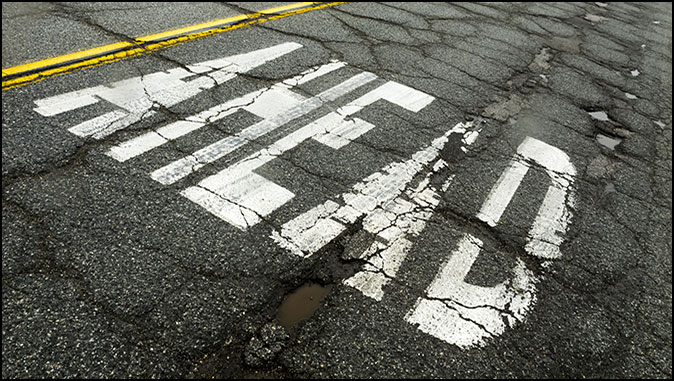 Rough Road Ahead
By Daymond Duck

Announcements coming from the Biden campaign and the apparent election fraud signify a rough road ahead for many in Israel, the U.S. and the world.

Here are a few examples:

ONE, concerning world government, in 2019 Pres. Trump gave the required one-year notice of his intent to pull the U.S. out of the Paris Climate Accords.

On Nov. 4, 2020, the one-year waiting period ended, and the U.S. is now officially out of that agreement.

Whether the U.S. stays out of that pact or gets back in may now be up to Biden, but it is being reported that he will sign an Executive Order to rejoin the globalist wealth redistribution scam on Jan. 20, 2021.

TWO, concerning the Battle of Gog and Magog, according to the Biden website, if Iran returns to compliance with the Iranian nuclear weapons deal, the U.S. will return to the agreement (Note: Trump withdrew because Iran wouldn’t comply).

Put another way: Biden intends to let up on Iran, Israel’s number one enemy and the number one world’s biggest supporter of terrorism.

THREE, also, concerning the Battle of Gog and Magog, on Nov. 4, 2020, an Israeli official said a U.S. return to the Iranian nuclear deal will eventually lead to a war between Israel and Iran.

FOUR, also concerning the Battle of Gog and Magog, Iran has vowed to help Syria retake the Golan Heights from Israel.

In late Oct. or early Nov. 2020, Israeli planes dropped leaflets on the Syrian side of the Golan Heights that warned Syrian troops and residents that Israel will attack Iranian forces and proxies that are trying to build bases in the area.

FIVE, concerning peace in the Middle East, Biden claims that he supports Israel, but he said he will restore U.S. support for the two-state solution which will divide Israel and endanger Israel’s existence.

Dividing Israel and scattering the Jews is the reason God will drag the nations into the Battle of Armageddon (Joel 3:2).

He believes there will be an effort to tax and close down these groups.

SEVEN, on Oct. 9, 2020, it was reported that PA Pres. Mahmoud Abbas has been covertly contacting Biden in an effort get him to reverse most of Pres. Trump’s pro-Israel policies, including the removal of the U.S. Embassy from Jerusalem.

There is no indication that Biden will do it, but if he does, America’s leaders should get in a cave and beg God to let the rocks fall on them (Rev. 6:15-16).

EIGHT, in 2018, Pres. Trump cut off the flow of hundreds of millions of dollars per year to the UN that went to the Palestinian Authority (PA).

On Nov. 9, 2020, it was reported that the UN is confident that the Biden Administration will restore these funds.

NINE, here are some of my thoughts on the election:

– It may take several weeks to determine who won the election.

– Some of the charges of voter fraud appear to be true, and I am praying that God will expose the fraud and deal with the perpetrators. There is good reason to believe that this is a deliberate coup against the presidency of the U.S. It has been widely reported that several states used voting machines that came from people with ties to George Soros and that these machines were programmed to switch votes from Trump to Biden. Soros funneled hundreds of millions of dollars to Democrats. There have been reports that Nancy Pelosi invested in the company that created the software for the machines. Republicans are investigating this in Michigan.

– God is still in control, He has this, He will still decide the outcome, His decision may be grace for America and the world, or it may be that it is time for His judgment to fall. He may use the Tribulation Period to do that.

– If Biden wins, it will demonstrate the power and control of the shadow government. Trump was hindering their New World Order. They wanted him out of office badly enough to spy on him, falsely accuse him, impeach him, lie about, falsely accuse and illegally jail some of his staff, and, in my mind, to steal the election. This is just part of their never-ending effort.

– If Biden wins, globalists will fast-track world government as soon as he takes office. Biden operatives are not waiting for Jan. 20, 2021. They are already preparing to reverse many of Trump’s policies, enact the Green New Deal, pass global warming legislation, pass Medicare for all, tear down the border wall, rejoin the World Health Organization, re-join the Paris Climate Accords, and more. Many believe tearing down the wall will spread Covid, and some also believe Covid is a scam to bring in world government.

– If Biden wins, globalists will fast-track world religion. Democrats have not allowed any references to God in their party platform, and they will go all out to remove God from our society.

– A Biden victory will increase persecution of Christians and conservatives. Extremist Democrats call Christians and conservatives racists; homophobes; they have attacked churches and synagogues; rioted, looted, burned businesses, and more. Biden has been supporting mandatory masks and talking about tougher lockdown requirements. On Nov. 9, 2020, Biden announced that his plan to fight Covid includes nationwide lockdowns, Covid testing and contact tracing (sounds a little like a system to track everyone). Another concern is a call from some Democrats to make a list of troublemakers that voted for Trump.

– The mainstream media and social media are corrupt. Deception and censorship are rampant. Truth rarely prevails. Fox News is beginning to slip.

– The importance of the Georgia Senate race cannot be over-emphasized. If Republicans retain control of the U.S. Senate, they can hinder the plunge toward world government and world religion.

– If the U.S. Supreme Court does not intervene, the shadow government has control of that institution too.

– A Biden victory will make war in the Middle East more likely. Russia, China, Iran, and the PA are already rejoicing over the possibility that Trump has lost, and Iran is already calling on the Arabs to abandon their normalization treaties with Israel. Biden, who’s son Hunter is under investigation for receiving millions of dollars from China, said he will restore America’s relations with China.

– The bad news is it looks like there is a rough road ahead for many.

– The good news is that the approaching world government and world religion signify an even closer Rapture, meaning Christians could soon exchange the rough road for streets of gold.

FINALLY, person’s having proof of election fraud have been asked to call True the Vote’s Election Integrity Hotline at 1-855-702-0702, or go to ValidatetheVote.us.

Information is available at the website, and there is a place to contribute to efforts to challenge the vote.

God loves you, and if you have not done so, sincerely admit that you are a sinner; believe that Jesus is the virgin born, sinless Son of God who died for the sins of the world, was buried and raised from the dead; ask Him to forgive your sins, cleanse you, come into your heart and be your Saviour; then tell someone that you have done this.