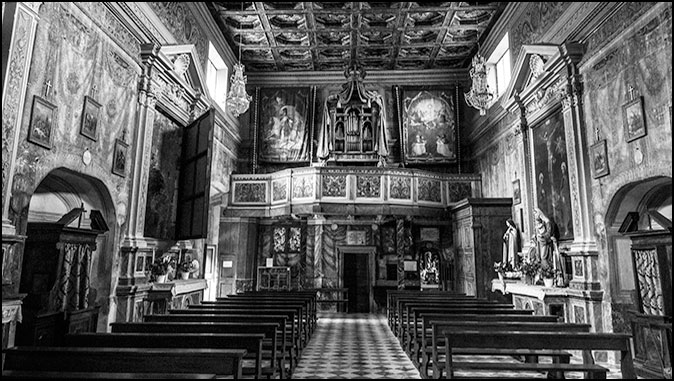 Tim Moore: Apostasy seems to be rising, not only in the Church but also in the lives of many individual believers in Jesus Christ. What exactly is apostasy? And, why is it such a threat to Christianity today?

Dennis Pollock, a former evangelist with Lamb & Lion Ministries, will provide his expertise on apostasy. I believe apostasy tears down the very foundations of the Church. So, Dennis, how would you define apostasy?

Dennis Pollock: Apostasy is a drifting away from the cardinal truths of Scripture. The Church has a pretty good grasp on what the Bible is really saying if you look towards Christian orthodoxy. But, a lot of people are so eager to have discovered a special revelation — a special insight — that would place them above the ordinary Christian that they move away from the orthodox tried and true beliefs of the Bible. They get into areas that either they cannot prove or that are just patently false, and I would call that apostasy.

Tim Moore: Sometimes these apostates succumb to the world’s pressure to be on the “right side of history” as the world’s ideologies shift. We’ve seen that happen dramatically in the last few years because Christians are not well-grounded in the Word of God. Many don’t even know what the orthodox beliefs of the Christian faith are so find themselves drifting away from sound biblical doctrine.

The major question facing Christianity today is, “How can churches stay true to the Word of God?” Apostasy has become a great danger that churches must recognize and protect themselves from too often today.

Dennis Pollock: We can stay true by preaching the whole Word of God. One of the ways that help ministers particularly to achieve this is to teach expository messages. For example, go through the book of James over the next five weeks, but instead of just going by your own pet doctrines and the things that really excite you, allow the Bible to speak for itself.

In some cases, apostasy is not so much that certain Christians have moved into false teachings, rather they’ve cut out just about half of the teachings in the Bible. Let me just give you an illustration. There was a time when I was starting a church and my son-in-law was helping me. He was into photography at the time and was going to add some pictures to my website. In order to make it kind of cool and attractive and hip, he showed a picture of me and a couple of the other people who were leading in the church with only half of our faces showing. I went to him and I said, “Seth, this website is showing only half of our faces.” And, he responded, “Well, because it looks cool.” And I’m like, “I’m sorry, but I want my whole face to be shown. I may not be the most handsome guy in the world, but still, they need to see the whole Dennis, not half a Dennis.”

Sadly, in the Church today, a lot of times we are getting only half the picture of God. The truth is, I honestly believe, apostasy has become the major issue of our day.

I can remember when I was in my 20s as a young pastor. I would sometimes listen to TV preachers who only preached the positive side of God. They never talk about wrath, or judgment, or Hell, or the Lord’s return, the negative things that are going to happen, and the disasters that are going to happen. They wouldn’t touch on any of that, It was all, “God thinks you’re swell. He thinks you’re wonderful. He’s got a great plan for your life.” Yes, there’s truth in that, but they wouldn’t touch the other side.

I can remember wondering, “Are they not even reading the Bible?” They disregard how Paul felt about heresy. They ignore how Jesus felt. Well, Jesus said to His disciples, “The world cannot hate you, but Me it hates because I testify that its works are evil” (John 7:7). Jesus is saying you have a problem if nobody dislikes you. If you are too positive, you are too fun, you are too nice and the world isn’t hating you, then you’re clearly going along with the crowd. Jesus said they hated Him because He testified that what they were doing was wrong. I really believe that is a word the Church needs to remember today. John Wesley at one time once said, “I must be doing something wrong; everybody is complimenting me too much. I’m not getting the criticism I used to get.”

Tim Moore: That’s good insight and wisdom. I’ve even heard some pastors proclaim, “I’m a New Testament Christian.” That would suggest they have ignored the Old Testament, neither reading nor studying it.

I would encourage Christians to get into the Word of God. Read it! Read it for yourself. Utilize the expository method, not just hopping and skipping around for favorite verses that you know and love, but to read it for receiving the revelation of the Holy Spirit which brings you greater understanding.

Most of us have access to online resources. So, if you don’t already have this in paperback, go and get a Bible that contains a good concordance where every verse is tied to other references to Scripture. You’ll find out that in the New Testament most of the verses are tied back to Old Testament references because they are either fulfillment of Old Testament prophecies or they are continuations of themes that the Lord introduced in the Old Testament. And, when you do that, as you stitch together what the Lord has revealed by the Holy Spirit’s guidance, and by using the tools in a concordance, I believe you’ll come to realize that all of God’s Word is wonderful and magnificent and it all fits together for His complete revelation to mankind.

Dennis Pollock: Yes, a lot of people have this misguided notion that the Old Testament God was angry all of the time. He carried lightning bolts on his waist, and He could take them out and hurl one at any time. In contrast, the New Testament God is easy-going, chilled out, and laid back. His biggest phrase He uses all of the time is, “No big deal.” But, you read some of the New Testament, especially the book of Revelation, you will read what Jesus said to the seven churches. Also, read some of the warnings Paul gave. You’ll soon be exclaiming, “Hey, wait a minute! God can still get upset? God can still be bothered by our behavior? Maybe we ought to be behaving ourselves then.”

Tim Moore: Yes, we should. In addition to behaving ourselves, what we are advocating is for Christians to be grounded in the Word of God. We need to be like the Bereans whom Paul complimented because they knew the Word of God. Even as Paul was sharing the Gospel truth with them, they stayed busy testing what he taught against the Old Testament Word of God that they had already hidden in their hearts.

We encourage Christians to practice this same diligence. Hide the Word of God in your heart and you’ll be able to test everything. You then will be able to avoid the drift into apostasy that we are witnessing today.