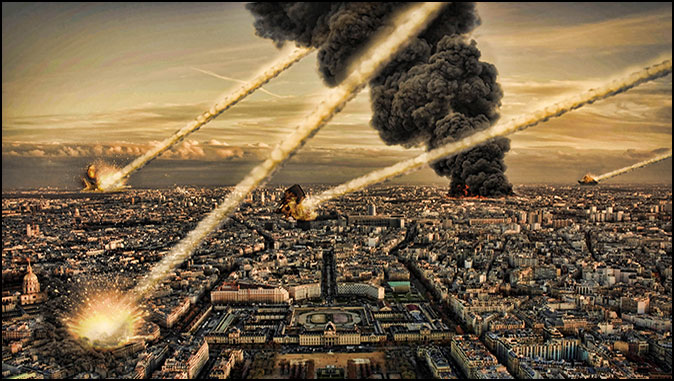 Prophetic Perspectives: Are We Living in the Tribulation?
By Nathan Jones

Tim Moore: This current Coronavirus pandemic has left a lot of questions on people’s hearts and minds. One of which, quite frankly, “Is this the end of the world?” And, “Are we living perhaps in the Tribulation?” Nathan, what do you think?

Nathan Jones: I would say, definitely not, folks. We are not currently living in that seven-year time period that has been prophesied throughout the Bible called the “time of Jacob’s trouble” and the “last days.” This is where we read in the Bible that God will pour out 21 judgments, as explained in Revelation 6-19, that will befall the world to judge the earth for its sins. Clearly, we are in a time period leading up to these judgments, as Jesus taught in Luke 21 and Matthew 24. There Jesus gave ten signs that were prophesied to show when mankind was getting closer and closer to Jesus’ soon return. These signs would come more frequent and intense like birth pains.

I would say that two of the end times signs categories that the Coronavirus would fall under is, one, pestilence, which was prophesied would result in an increase in plagues and pestilence. And, two, fearful events as the result of potential economic collapse and then people committing suicide and so forth.

Tim Moore: I agree with you completely. I appreciate what you said about birth pains because the Lord in Matthew 24:6-8 referred to all of the natural signs involving cataclysms and the hearing of wars and rumors of wars that would happen. Jesus said all these things must take place before the Tribulation begins.

In Matthew 24:8, Jesus said that all of these signs were the beginning of the birth pains. At least anyone who has birthed a child or whose wife has had a child knows that birth pains begin slowly and infrequently but increase in both intensity and frequency up until the moment that the baby arrives at the birth. And so, when the birth pains start, you know that the birth is imminent, meaning coming very soon, but you don’t know the exact moment.

In Luke 21:10-11, the Lord continued that same thought for it was the same sermon. He said that nation would rise against nation and kingdom against kingdom, and there would be great earthquakes in various places, and plagues, and famines, and there would be terrors and great signs out of the heavens.

We are living in a time of great terror and fear from a whole host of calamities that have befallen the earth, but we are also experiencing at this moment a plague of virtual “biblical” proportions. We have been hearing scientists tell us all along that the pandemic could get even worse.

One of the messages that we want to convey is, no, this is not THE Tribulation, although it is a time of tribulations, if you will. We also know that this pandemic is a demonstration of the Lord God giving a warning that the end times are drawing very close. Doing so is another part of God’s attributes — God always warns before He brings a final judgment.

Nathan Jones: This pandemic has been a global warning by God saying, “Look up! I’m coming back soon.” So, that begs the question, “How are you responding to that warning? Are you looking for the signs that show that Jesus Christ is returning soon? And, if not, why so?” We should be looking at the signs of the end times because Jesus wants us to know that He’s coming back. Jesus is returning to take the Church up to Heaven to be with Him in an event called the Rapture. Then the Tribulation happens.

So, folks, no, we are not now living in the Tribulation.

Tim Moore: No, we’re not. And, this is not the end of the world. But, hear us clearly. That time is coming. Your opportunity for accepting Jesus Christ will come to an end at some point.

Whether or not this pestilence, or the truck speeding down the road and crossing over the center line, or any other of a host of reasons are responsible for bringing you to the end of this life — you will die, unless the Lord returns beforehand and raptures you up with the rest of us who are part of the Church. And so, instead of being fearful of this event, I hope that it will motivate you to consider, even right now, turning to the Lord Jesus Christ, accepting Him, repenting, and so be assured you will then have eternal life.

And with that great and blessed hope, we bid you a blessing this day. Godspeed!

Voting for Peace? By Terry James While the presidential election draws ever nearer, the current…