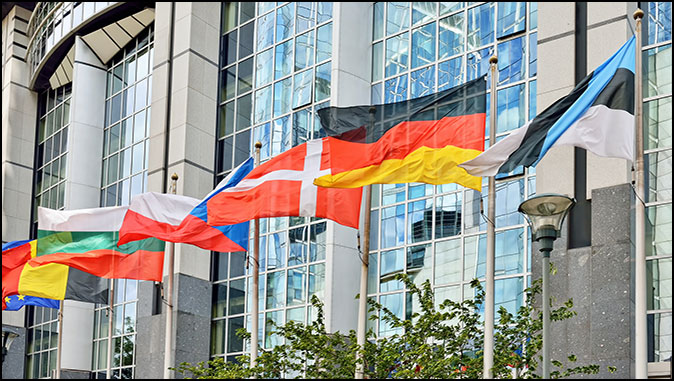 Nathan Jones: Everybody seems to be talking about Globalism nowadays — this idea that the whole world will soon be united. Nations will no longer have any borders resulting in peace and harmony throughout the world. Kumbaya! But, is peace really the end goal of the Globalist’s agenda?

I asked this question of Don McGee, my fellow evangelist, long-time mentor, and friend. Don’s been a minister, a pastor, and an evangelist for many years. He’s a fantastic teacher of the subject of Bible prophecy. He contributed a chapter to the electrifying book Lawless, edited by Terry James. Both Dr. David Reagan and I have contributed chapters to this book as well.

Don, your chapter is titled “Satan’s Extermination Storm Troopers,” which is a very clever title. The whole chapter revolves around Globalism. On page 299 you say: “In Satan’s plan, Globalism is the situation where he owns and controls the planet, demanding worship from its inhabitants. To accomplish this would be to fuel his insatiable pride, concurrently destroying the sovereignty and glory of God.”

This revelation rather blows my mind because when you hear people talk about Globalism it sounds so wonderful. It’s sold as being so peaceful. The nations of the world are all going to unite and end hunger and poverty. But, you are claiming there’s actually a satanic agenda behind Globalism?

Don McGee: Yes, Globalism’s been like that since the beginning of world history. Satan was a globalist when he rebelled against God. He wanted to control the universe in place of God. Banished from Heaven, Satan remains alive and well on planet Earth. His sole objective since Adam and Eve has been to unite the world in rebellion against God. He’s going to think that he’s pretty close to achieving victory against God through the Antichrist’s reign, but it will never fully happen.

Nathan Jones: Globalism can be best summed up in the Beetles’ star John Lennon’s song “Imagine.” Lennon calls his hearers to imagine a world that has finally achieved peace and harmony, but only because there is no God in it.

Don McGee: Peace without the Prince of Peace is impossible to have. People hold a misconception about these things. A group of people living together will always experience problems. Fallen humans will fight, they will steal, they will murder, and they will lie. This idea of achieving a global, harmonious society is a pipe dream. We are susceptible to the mirage of utopianism because as human beings our fallen nature longs for peace but only knows war, and Satan knows that. So, what carrot does he dangle in front of everyone? Globalism!

Nathan Jones: Interesting. Satan shrouds his plans in peace, but really his objective is war. We read in the Bible about Satan’s rule through the Antichrist during the Tribulation and the horrific means by which the Antichrist uses to set up his dominion. The Bible prophesies that Satan will indeed succeed in raising up a one-world leader who will rule over this globalist system. But, to achieve that level of power, the Antichrist has to bring war to the world. Doesn’t the Bible prophesy that half of the world’s population will die in just the first few years of the Tribulation?

Don McGee: How can somebody say that unity brings peace when by the breaking of the Fourth Seal in Revelation 6 a whopping 25% of the world’s population that is left after the Rapture will die in four terrible, horrible ways. Read it!

Nathan Jones: Yes, the Antichrist comes to power claiming to be a peacemaker, but instead he brings war.

Nathan Jones: What then is Globalism’s end game? What’s the true purpose of Globalism? What does Satan want to get out of this?

Don McGee: Satan wants control. He wants the human race to himself because he wants everyone to worship him. That’s what got him in trouble in the beginning, and he wants it here and now. He’s going to do everything he can in the process of achieving that goal.

Nathan Jones: Satan then is going to look at you and me as Christians and see us as the enemy, and he will continue to target Christians for death during this Church Age since they refuse to worship him. During the coming post-Rapture globalist empire, how will Satan try to eliminate those who accept Jesus as Savior after the Rapture whom we call Tribulation Saints?

Don McGee: One of the methods Satan will use is to call peace justice. People say that in order to have peace, you must have justice. That’s so juvenile! Peace has nothing to do with justice. Peace is not based upon circumstances. Peace is based upon a relationship with God. Many Christians are dying today in violent environments. There is no peace out there as most people think of peace because to many justice means revenge, and revenge only incites war.

Nathan Jones: Don, in your chapter you wrote about the Georgia Guidestones which list Satan’s humanist agenda. The agenda calls for maintaining humanity’s population under half a billion people. Well, then, what is he going to have to do with the other 7.5 billion people on the planet? We see what Satan does as the Antichrist murders half of the planet by the mid-point of the Tribulation.

The Georgia Guidestones also make the globalist call to guide reproduction, meaning unfettered abortion, and to unite humanity with a new language. New rules will be written and a new religion will be formed. New passions will be defined, whatever that means, and society is called to avoid petty laws, which likely means decriminalizing drugs and prostitution. Again, this agenda prides truth, beauty, and love, but these are all are pie in the sky. Will we ever get such a society?

Don McGee: No, not by mankind’s own devices. A herculean attempt to build such a society will be undertaken immediately after the Church is removed at the Rapture. The Antichrist and False Prophet will attempt to unite people, but it is only going to be a superficial unity without any substance. It will not have lasting peace.

Globalism directly violates God’s plan for the human race and for the earth. Why do you think God scattered the people at Babel? God wants diversity. He wants people to live as He created them to live.

Nathan Jones: Right! Well, what encourages me is though human governments fail, one day Jesus Christ will return and He will set up His Millennial Kingdom. That kingdom ruled by Jesus Christ from Jerusalem will truly achieve almost universal peace and righteousness and justice. But, then, by the end of a thousand years when Satan is released from the Pit, he will gather a great many people to rebel against God. So, it doesn’t seem like humanity can finally achieve that utopian dream without God.

Don McGee: That’s because the human heart is inherently evil. It’s wicked! It’s only when the old sin nature is purged upon receiving our glorified, eternal bodies that mankind can be capable of selfless peace.