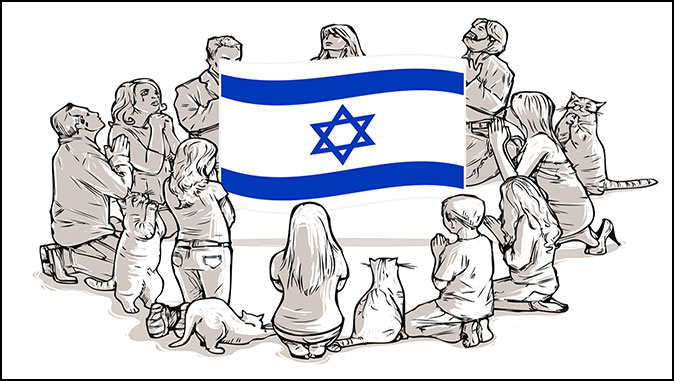 Pray for the Peace of Israel
By Tim Moore

We are commanded by the Bible to pray for the peace of Jerusalem. For the last several months, prayers for Israel have taken on new importance.

The previous year has been very challenging to people all around the world due to the COVID Pandemic, economic downturns, and political challenges in America and in other nations. But, can you imagine living under the threat of daily attacks? Israelis live under the constant threat of rockets reigning down upon them from Gaza and Lebanon, often having no idea where these missiles are going to land. That’s what the people of Israel have been experiencing on and off for several years.

It is appropriate that we here at Lamb & Lion Ministries comment on this terrible situation because we have a heart for Israel and for the Jewish people.

When Hamas, the terrorist organization that rules over Gaza, attacked Israel in the Spring of 2021, some people had the misguided understanding that a war was being waged between two sides who were on moral equivalency. Nothing can be further from the truth! The terrorist who reign in Gaza, Hamas, have long declared their determination to annihilate Israel and kill as many Jews as possible. Even when the West invests money and sends the Palestinians millions of dollars in support, Hamas diverts the funds into either lining their own leaders’ own pockets, or by creating invasion tunnels, or by purchasing weapons to attack Israel.

Why? Because those who disdain the Jewish people are fueled by a satanic hatred of Israel.

When Israel responds with appropriate degrees of defensive measures against the unprovoked attacks by the very militants who are killing Jews, it results in the world crying out in outrage against, not the Arabs, but the Jewish people! Even in the United States, some very misguided leaders have thrown their support behind terrorist Hamas instead of standing together with democratic Israel.

Let me be very clear — our ministry stands with Israel. We pray for the peace of Jerusalem, knowing that peace will not reign over Jerusalem until the Prince of Peace comes to reign on the throne of His ancestor David. But, we also realize that, all of the political posturing and propaganda aside, Israel has every right to defend itself.

Some misguided people actually claim that the latest round of violence between Hamas and Israel was Israel’s fault because they say Israel’s courts had recently evicted several Palestinians from East Jerusalem. The fact of the matter is, there have been only a handful of families — four to be specific — who had been living on land that was previously owned by Jewish people back during the Ottoman Empire. When the nation of Jordan claimed East Jerusalem and the West Bank as its territory following 1948, it evicted the Jewish homeowners and allowed those who later became labeled as Palestinians to live on Jewish land, and without ever transferring title. When Israel came back in possession of Jerusalem and the Old City in 1967, the Israeli courts decided that they would allow those Jewish people who had rightful, legal land claims to return to their homes. And, that is exactly what they did. Of course, a legal battle between these four Palestinian families and what the courts decided was the rightful Jewish landowners ensued. After many years of legal wrangling, the Israeli court system through the judicial process awarded custody of the disputed property to the original Jewish owners.

Hamas latched upon this ruling as an excuse to demonstrate its own solidarity with the Palestinian people living in Judea and Samaria and in East Jerusalem. They used the eviction as an excuse to begin attacking Israel. What an absolutely ridiculous reason to start a war!

The United States would never tolerate rockets being hurled into say Texas from Mexico, or into Washington from Canada. No nation would tolerate rockets being launched at its citizens, and specifically targeting civilians. Israel responded by only targeting militants. Even when they destroy public buildings used by Hamas, Israel called ahead and warned the people in those buildings to leave before being leveled. The public buildings are often used as headquarters by Hamas for the purpose of manufacturing weapons or to be used as a launching site for their rockets. These immoral terrorists hide behind their own civilians!

A Call to Prayer

We should also pray for the Palestinian people, for so many are being deceived by their own leaders who are fueled by their satanic hatred of the Jewish people. We need to pray for all of those who have been suffering as victims of this violence, yet realizing that this violence has been initiated and is being perpetuated by those whose determined end is the destruction of Israel and the murder of all Jewish people.

We also need to call out our own so-called leaders here in the United States who are trying to stir up support for Hamas and other terrorist organizations. The current administration has even been giving money to the Palestinian terrorists and has been trying to create a deal with Iran to provide them with more money which will only flow down to the Hamas terrorists fighting Israel and Hezbollah terrorists based in Lebanon.

Please pray! Pray earnestly for the peace of Jerusalem and know that soon and very soon our Prince of Peace will come. Godspeed!