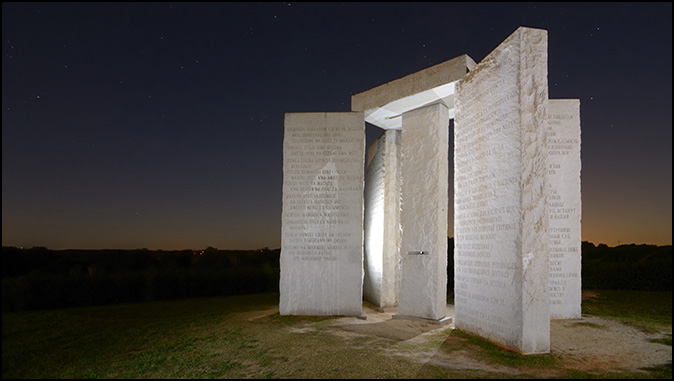 “We are a plague on the Earth. It’s coming home to roost over the next 50 years or so. It’s not just climate change; it’s sheer space, places to grow food for this enormous horde. Either we limit our population growth or the natural world will do it for us, and the natural world is doing it for us right now.” – British television personality Sir David Attenborough

We’re going to consider an agenda that the globalists have to depopulate the Earth. Some of our elitists anxious for a global government have the view that the Earth is already overpopulated, that for the health of everybody we need to depopulate it. It sounds good to have fewer people on the planet, with more food sources and clean water for everybody. It all sounds good until we realize we have to decide how that is going to happen and who is going to make
those decisions.

Out of that comes a strange technology, the ability to design diseases deliberately to wipe out human beings. Remember, Jesus warned us about this in the Olivet Discourse. He said:

“For nation shall rise against nation, and kingdom against kingdom: and there shall be famines, and pestilences, and earthquakes, in divers places. All these are the beginning of sorrows.” – Matthew 24:7-8

Pestilences are part of what’s coming, and Jesus noted that this is only the beginning of sorrows. In verse 22 of the same discourse, Jesus reminds us that “except the days of the Tribulation be shortened, there should no flesh be saved,” but those days would be shortened for the sake of the elect. Wow. That’s a technology statement. That statement implies a capability to end all life on Earth. In ancient times, there would have been no way to wholesale destroy all life on the planet, but today we do have those capabilities. In today’s world, we have both the nuclear and biological power to unleash destructive forces that could lead to our ultimate demise.

We’ve gone through a variety of killer diseases and we’ve mentioned the possibility of biological terrorism. We recognize that our defenses for these things are inadequate, not from lack of throwing money at the problem. By nature, bacteria and viruses mutate, forcing us to constantly change our attacks on them. Human-designed microorganisms – engineered to kill and resist antibiotics – will be horribly deadly by their very character. This is a complex kind of warfare. When we consider that some diseases have an incubation period before they manifest, that some are highly contagious even before symptoms start to appear, we recognize the incredible difficulty in protecting ourselves from a purposeful pandemic.

The Bible tells us, though, not to be ignorant of Satan’s devices. These are Satan’s devices. We do not want to dwell on them and live in fear, but we also want to be diligent to heed warnings. Paul warns us that, “…we wrestle not against flesh and blood, but against principalities, against powers, against the rulers of the darkness of this world, against spiritual wickedness in high places.”

Rulers of the Darkness

There are rulers of the darkness in this world. There is a goal among the globalists to lower the population of the planet Earth. That sounds like a conspiracy theory, but it’s not. There are plenty of people who believe that the world would be better off with fewer humans in it. Those in the environmental movement lead the call for reducing the population, and some go to extremes, but there is a clear agenda of depopulation by people in power. When we consider the possibilities of designer diseases, things get very scary.

Medical knowledge and hygiene do have an impact on the spread of disease. There are ways to prepare for critical situations. We should not live with a sense of helplessness. At the same time, there are dangerous possibilities on the horizon. The population control agenda can include genocide. There are those who intend to depopulate large segments of the Earth, and they have written about reducing our numbers by force if necessary.

The famous Georgia Guidestones, erected 30 miles from Atlanta in 1980, declare as their first commandment, “Maintain humanity under 500,000,000 in perpetual balance with nature.” The genocide is already taking place: more than one million human lives are aborted every year in the name of “family planning.”

Dave Foreman, who co-founded the environmental organization Earth First!, famously said, “My three main goals would be to reduce human population to about 100 million worldwide, destroy the industrial infrastructure, and see wilderness, with its full complement of species, returning throughout the world.”

Extremists in the environmental movement might be expected to hold positions like this, however, mainstream individuals have long promoted population control as a means of elevating the species. Prince Philip, Duke of Edinburgh, is well-known for his support of eugenics and his desire to curb the human population. In a 1984 TV interview, he considered the depletion of the Amazon rainforests and said the human population was “reaching plague proportions.” In fact, he wrote about his desire to be a deadly virus in the forward of the 1987 book If I Were An Animal:

“I just wonder what it would be like to be reincarnated in an animal whose species had been so reduced in numbers that it was in danger of extinction. What would be its feelings toward the human species whose population explosion had denied it somewhere to exist… I must confess that I am tempted to ask for reincarnation as a particularly deadly virus.”

The Prince (who himself had four children) is not alone in his view of humans as less-than-valuable. One of the most celebrated women in the 20th century also regarded large numbers of humans as a scourge on the planet.

Planned Parenthood founder Margaret Sanger is well known for her ideas about eugenics, a philosophy about social order that focuses on improving the quality of the human gene pool by controlling which groups are allowed to breed. Margaret Sanger referred to the vast hordes of humanity as “weeds” on many occasions, writing in her 1920 book, Woman and the New Race, that birth control “is nothing more or less than the facilitation of the process of weeding out the unfit, of preventing the birth of defectives or of those who will become defectives.”

Planned Parenthood claims to be about empowering women, but it has faced intense criticism for its habit of looking the other way when sexually abused minors and trafficked girls are brought in for abortions. There have been a variety of videos exposing Planned Parenthood employees’ sale of infant body parts, and of wanton disregard for the lives of babies born alive. Planned Parenthood has shown its true purpose – of making money by thinning the human population.

Sanger had no shame about advocating forced sterilization of those deemed less fit, stating in her book The Pivot of Civilization:

“The emergency problem of segregation and sterilization must be faced immediately. Every feeble-minded girl or woman of the hereditary type, especially of the moron class, should be segregated during the reproductive period. Otherwise, she is almost certain to bear imbecile children, who in turn are just as certain to breed other defectives.”

Margaret Sanger began publishing her magazine Birth Control Review in 1917. Beyond a desire to provide women with contraception, Sanger wanted to genetically engineer the human race and eliminate those genetic lines considered less valuable. In the 1930s, she openly supported Nazi Germany’s focus on developing a perfect Aryan race and the infanticide of those considered less desirable. In the years before World War II, Sanger corresponded with the Nazi Ernst Rudin, the head of the top German eugenics research institute. She published Rudin’s article, “Eugenic Sterilization: An Urgent Need” in the April 1933 issue of BCR. George Grant chronicles the life and writings of Margaret Sanger in his book Killer Angel.

Sanger’s book The Pivot of Civilization contains a chapter called “The Cruelty of Charity” in which she criticizes the existence of charitable institutions, saying, “Organized charity itself is the symptom of a malignant social disease.” She envisions a world where no human being has to depend on any other, and she declares, “…Our eyes should be opened to the terrific cost to the community of this dead weight of human waste.” She calls for the segregation of the unfit and the prohibition of their reproduction.

In 1939, Margaret Sanger organized the Negro Project to take family planning to the African American communities of the south. She justified her proposals as a means of improving the quality of life of black Americans, but there are heavy racist overtones to her goal of limiting the numbers of black babies. The condescension is clear in the instructions Sanger gave regarding training black ministers to promote birth control. In November of 1939, Sanger received a note from Dr. Clarence J. Gamble of Proctor and Gamble, whom she’d chosen as director of the Birth Control Federation of America in the south. Gamble was concerned that black leaders might see birth control as a form of extermination. Sanger responded in a letter dated December 10, 1939, encouraging use of black ministers:

“The ministers [sic] work is also important and also he should be trained, perhaps by the Federation as to our ideals and the goal that we hope to reach. We do not want word to go out that we want to exterminate the Negro population and the minister is the man who can straighten out that idea if it ever occurs to any of their more rebellious members.”

Before the horrors of Nazi eugenics were revealed, groups seeking population control passed forced sterilization laws in 37 states. The 1927 U.S. Supreme Court case Buck v. Bell decision validated these laws. Sterilization proponents met opposition from Catholic and Protestant groups, and British socialist Harold Laski wrote to Justice Oliver Wendell Holmes that religious people were a problem too, saying, “Sterilize all the unfit, among whom I include all fundamentalists.”

As the years passed, Sanger became increasingly obsessed with the occult. It’s clear from her writings that she’d grown to hate America and American freedom. Just like Adolf Hitler, Margaret Sanger was a disciple of Theosophy and its founder, Madame Blavatsky. Both Sanger and Hitler were involved in a religion that worshiped Lucifer, and the spiritual results are clear – Sanger demonstrated a marked hostility to Christianity:

Birth control appeals to the advanced radical because it is calculated to undermine the authority of the Christian churches. I look forward to seeing humanity free someday of the tyranny of Christianity no less than capitalism.

Lucis Trust is a prominent modern-day representative of Theosophy, an extension of the Lucifer Publishing Company, which is also a United Nations NGO. Lucis Trust was founded by Alice A. Bailey during the early 20th century. Bailey was a disciple of Madame Blavatsky and nominal leader of the Theosophical Society in the early 1900s.

Sanger went on to found Planned Parenthood, and her marked disregard for the intrinsic value of human life is clear in this institution of “family planning.” Story after story has come out of Planned Parenthood of cold, hard nurses who disregarded the concerns or pain of their abortion patients. We hear the testimony of “Angele,” who decided to abort her 22-week-old baby, and after the baby was born alive wanted to save his life. The staff at Orlando Women’s Center operated by Dr. James Pendergraft refused to help the born-alive baby. If the Planned Parenthood staff’s interest were in the mother, they would have shown her compassion or tried to help her. It’s not about woman’s choice. It’s about population control.