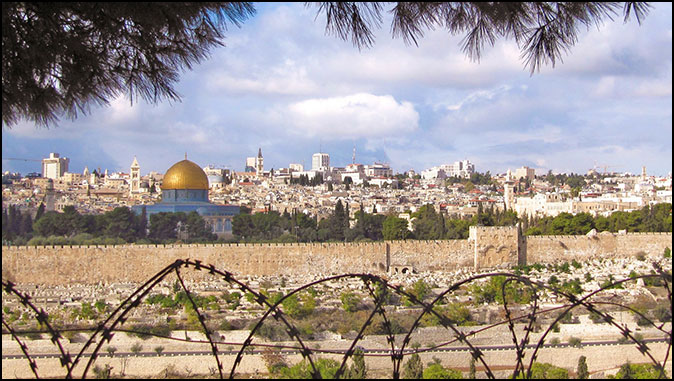 Peace, Peace When There is no Peace
By Daymond Duck

ONE, the “Treaty of Peace” between Israel and the UAE is scheduled to be signed at the White House on Sept. 15, 2020.

This is not the “covenant with many” that will begin the Tribulation Period (Dan. 9:27), but it is not hard to find good Bible prophecy teachers that believe it will trigger progress toward that end.

One PA official called the Arab League’s refusal to reject the “Treaty of Peace” a stab in the back for the Palestinian cause and expressed the opinion that it will open the door for other Arab nations to sign “Treaties of Peace” with Israel.

THREE, Pres. Trump has been nominated for the Nobel Peace Prize for his efforts to bring peace to the Middle East.

Bahrain will be the fourth Arab country to sign a peace treaty with Israel (the other three are Jordan, Egypt and the UAE (note: The Rapture hasn’t happened, the Church is still here, and these aren’t 7-year peace treaties; but the fact that these treaties came into being so fast should remind us that a 7-year covenant with many could come into being very fast. Also, be aware that Russia, Iran, Turkey, the PA, Hezbollah and Hamas don’t like these treaties, and their hostility could trigger some of the prophesied wars in the Middle East. The Houthis and others are, in fact, already threatening to strike Israel over these peace treaties.).

FIVE, Pres. Trump received an unprecedented second nomination for the Nobel Peace Prize for his efforts to bring peace to the Middle East.

SIX, on Sept. 9,2020, Jared Kushner (Pres. Trump’s son-in-law and advisor) said Trump’s peace plan is an effort to save the Two-State Solution.

Kushner said if things kept going the way they were going, “ultimately, Israel would have eaten up all the land in the West Bank.”

Instead of “peace and safety,” the end result will be the Battle of Armageddon.

According to Israel and the U.S., the Al-Aqsa Mosque is just the building itself, and the “other holy sites” is the remainder of the Temple Mount.

This means the EAU and Bahrain are agreeing that everything on the Temple Mount except the building called the Al-Aqsa Mosque should be open to people of all faiths, including Jews, and it could open the door for a rebuilt Temple.

The Temple will be rebuilt, the Antichrist will break the covenant with many and defile the Temple at the middle of the Tribulation Period, and the Jews in Judea will have to flee for their lives; and now the door may be opening for all of this.

For whatever it is worth, some Jewish rabbis have said Trump is another Cyrus that God has put in office to open the door for a rebuilt Temple.

EIGHT, concerning deceit or wickedness, on Sept. 8, 2020, it was reported that about 1,000 people voted twice in Georgia’s June election and they may be prosecuted.

They voted the first time by absentee ballot and then voted in person a second time on election day.

If it happened once, it can happen again, and the people that are left behind after the Rapture will eventually wind up with the most corrupt leader the world has ever had.

NINE, activists (with the approval of many Democrats) have announced plans to “lay siege to the White House” until election day.

They intend to do everything they can (including weeks of violent demonstrations in the Democrat-run city of Washington, DC) to stop the re-election of Trump.

Note: In the two days following the shooting of two Los Angeles Sheriff’s officers, the blocking of emergency entrances to the hospital, and chants of “we hope you die,” California Senator, former Attorney Gen. of California, and candidate for Vice-Pres. of the U.S., Kamala Harris has not voiced one word of criticism of these events or any desire for the wounded police officers to survive.

Elected officials are a major part of the rioting and looting problem in the U.S., and they are not worthy to hold any political position in the U.S. regardless of Party.

TEN, concerning natural disasters like birth pains, the second week of Sept. 2020 had the worst wildfires in California history (about 4,844 square miles this year), the evacuation of more than 500,000 people in Oregon (more than 10% of the population of the state and more than 1,400 square miles in the state), and about 937 square miles in Washington.

The numbers are changing almost daily, but on Sept. 12, 2020, Fox News reported that at least 24 people had been killed, dozens were missing, more than 6,000 homes and businesses had been destroyed, and thousands more were in danger.

As I write this, a slow-moving hurricane named Sally is threatening the Gulf Coast with high winds (perhaps up to 110 mph), a dangerous storm surge (perhaps more than 10 feet), torrential rains (perhaps 18-24 inches is places), and severe flooding.

Several tropical storms that could develop into hurricanes are behind Sally.

The nation of Israel is going on a 21-day Coronavirus lockdown.

God loves you, and if you have not done so, sincerely admit that you are a sinner; believe that Jesus is the virgin born, sinless Son of God who died for the sins of the world, was buried and raised from the dead; ask Him to forgive your sins, cleanse you, come into your heart and be your Saviour; then tell someone that you have done this.