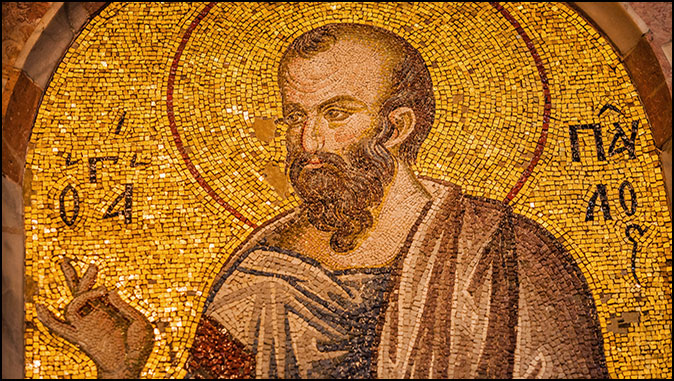 Paul Speaks to Us
By Terry James

Bombardment every waking moment, through constantly churning news cycles, presents an ominous unfolding that can’t be missed by the truly spiritually attuned Christian. We’re well into the “end of days,” as the secular writers and other pundits like to term it.

We’re seeing in geopolitics the powers and principalities in their high places of wickedness doing all within their considerable abilities to bring about global government. Satan’s one-world effort to establish his Antichrist regime is well underway. Only God’s restraining hand has kept the devil from being able to complete his prophesied task—to bring to earthly power the first and second beasts of Revelation chapter 13.

In these commentaries, we’ve talked about this luciferian effort and the Lord’s staying hand at work to delay its implementation. The effort at that implementation has been especially aggressive within the United States. Attempts to bring down the American president who is anti-globalist in every respect has been almost beyond description or even belief.

In the religious realm, we’ve seen a marked refusal to stand up against the evil going on within society and culture. There is well underway an apostasy of the first order. The “falling away,” in terms of departure from faith among a growing number of Christian ministries, is made clear in the lack of opposition offered from the pulpits to that proliferating evil.

The current pope has endorsed the apostate declaration that all will eventually be in Heaven for eternity, no matter whether saint, agnostic, or atheist. He has embraced climate change as part of the growing trend toward the worship of Mother Earth. Whether Catholic or Protestant, many of the clergy in what is called Christendom are either totally in for, or totally silent on, the issues within the social justice movement so in vogue today.

Regarding those social justice issues, the apostle Paul’s words of forewarning can almost be heard echoing down through the corridors of this eerie time in history. Perilous times are indeed with us—again—every waking moment while we get the hourly and even minute-by-minute news reports from the nation and from around the world.

Paul, in 2 Timothy 3, is, it seems to me, speaking directly to this generation when he says:

For men shall be lovers of their own selves, covetous, boasters, proud, blasphemers, disobedient to parents, unthankful, unholy, Without natural affection, trucebreakers, false accusers, incontinent, fierce, despisers of those that are good, Traitors, heady, high-minded, lovers of pleasures more than lovers of God; Having a form of godliness, but denying the power thereof.

Let’s look at a few of these characteristics of end-times humans as the great apostle gives them and as we think on our experience as of late.

Video and audio of the rioters in the various cities they have destroyed, burned, and looted contain some of the most blasphemous language imaginable. They are so vulgar, so blasphemous, that one hears almost a constant beeping the news organizations use to keep from violating broadcast etiquette and regulations.

Many of these are pampered Millennials who are college students that have never been disadvantaged in any way. They directly disrespect parents and rules of civil comportment. They exemplify Paul’s terms “unthankful” and “unholy.”

The anarchists who join the likes of Black Lives Matter and Antifa are traitorous to the nation that gave them the privileges they now violently protest. These are Communist/Marxist organizations that hate everything about America and foment its destruction. Those who, like the “useful idiots” Marx wrote about, “falsely accuse” people of America in general and the police across the country of wanting to murder people of color, particularly African Americans. These arsonists and thugs are “incontinent”—that is, they are unwilling and/or unable to control their desires to commit these insane acts of rage. They are “fierce” and launch bricks, bottles of frozen water, and Molotov cocktails at police and even at owners of private property and businesses.

All of this demonstrates, I believe we should conclude, that we are in the very last hours of this fleeting age. We must, of course, defend against the forces that want to destroy and even kill to do the service of their master, the devil. But, even though it is difficult to understand all involved in His Instruction, Jesus has an even stronger defense for us to follow while we guard against those who would do us harm. We must obey Him no matter what, and leave all the consequences to Him.

“But I say unto you which hear, Love your enemies, do good to them which hate you, Bless them that curse you, and pray for them which despitefully use you.” – (Luke 6: 27–28)

Voting for Peace? By Terry James While the presidential election draws ever nearer, the current…