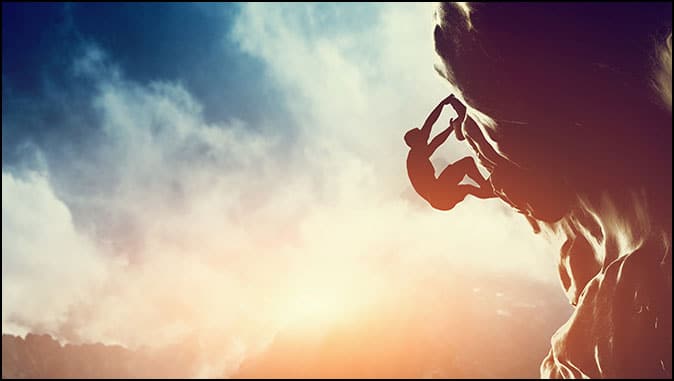 Our World Hangs on the Edge of Eternity
By Jonathan C. Brentner

I tense up inside just watching rock climbers on television. I remember looking away from a movie scene where Tom Cruise hung by one hand on the edge of a cliff with a drop of thousands of feet below him. The Lord did not equip me for such adventures (or even to watch people defy death in such a way).

When I think of our world at this moment, I picture Tom Cruise dangling on the edge of a cliff with nothing but air below him. Likewise, our world hangs on the precipice of eternity as signs of the rapidly approaching tribulation gain in intensity each day.

And if our world lies on the edge of this coming time of wrath, then how much closer must we as believers be to the rapture that happens before the tribulation begins?

I believe we live in a period of relative calm before a great storm sweeps across the planet. God’s judgment on the Christ-rejecting world is ever so close at hand. The rapidly approaching tribulation will bring people face to face with the wrath of the Lord and give them one more opportunity to turn to the Savior before they face an eternity apart from Him.

Our World is Ready to Explode

We see evidences of a world set to explode everywhere we look. I provide just a few examples of this in the paragraphs below.

The election here in America has brought our nation to the point of breaking with ramifications for the entire world. The one claiming to be the “president-elect” has in reality not won anything yet and President Trump remains confident that he will prove a vast amount of election fraud and thereby remain in office.

If the Supreme Court should declare President Trump the winner, and this seems at least plausible, violence will likely erupt on the streets of the United States and a civil war may occur. If there is a lengthy delay in announcing a final outcome of the election and President Trump does not concede, we may see the left attempt to forcibly remove him from office. Joe Biden and Barack Obama have both talked publicly about this possibility, which makes it something we cannot ignore.

If Biden becomes President on January 20, 2021, he plans to put the entire United States in lockdown for up to six weeks; an action that will surely bankrupt many businesses striving to survive from the previous lockdowns and bring economic hardship upon millions who will lose their jobs as a result of Biden’s harsh COVID-19 policies.

Iran, held in check by President Trump for the past four years, has already put its neighbors on notice that with Biden in office they will return to their violent efforts to subdue the Middle East under its power. It’s easy to imagine how civil strife in America or the economic disaster following a Biden lockdown could become a flashing green light for Russia and Iran to invade Israel per the prophecy in Ezekiel 38-39.

Not only is the world on the precipice of calamity from these possibilities, but geologists repeatedly warn of impending natural disasters in America. They say California is long overdue for a catastrophic earthquake. The frequency and sheer abundance of earthquakes at Yellowstone Park alarm many scientists who fear a disastrous eruption of the volcano in the park would instantly kill millions of people.

The Great Reset Looms in the World’s Future

Once the world falls over the edge, it will fall into the false security of the coming Great Reset advocated by the World Economic Forum (WEF). In an open letter to President Donald Trump dated October 25, 2020, Catholic Archbishop Carlo Maria Viganò wrote these chilling words about how those behind The Great Reset will step in to save people and businesses falling off the cliff of financial ruin:

The purpose of the Great Reset is the imposition of a health dictatorship aiming at the imposition of liberticidal [liberty destroying] measures, hidden behind tempting promises of ensuring a universal income and cancelling individual debt. The price of these concessions from the International Monetary Fund will be the renunciation of private property and adherence to a program of vaccination against Covid-19 and Covid-21 promoted by Bill Gates with the collaboration of the main pharmaceutical groups…Those who do not accept these measures will be confined in detention camps or placed under house arrest, and all their assets will be confiscated.

Does this not sound identical to the policies that the antichrist will enact during the tribulation? The only difference is that he will kill all those who do not worship him and refuse his mark (Rev. 13).

The World Economic Forum (WEF) hopes to implement The Great Reset in the aftermath of the worldwide emergency triggered by COVID-19. This becomes quite clear from reading quotes and articles on the WEF website. Because of this intent, they have a vested interest in the rising incidents of the virus as well as hospitalizations and deaths so as to create greater fear and the need for lengthy lockdowns that will further devastate economies in America and other nations throughout the world. After that, they will offer financial remedies that will sound life-saving at first, but will come with a horrible price that includes servitude to their tyrannical world order.

I believe that the WEF postponed their annual January meeting until late May 2021 in hopes that by then they will be able to incorporate a weakened United States into their plans for The Great Reset.

The structure of the WEF Great Reset has been in place for a long time, but the globalists have lacked both the necessary worldwide crisis and charismatic leader to make their dream a reality. They now have the crisis they need in the widespread fear generated by the COVID-19 virus, but they still need a powerful leader to pull the world together under the banner of a one world government.

2 Thessalonians 2:3-8 tells us that the antichrist will someday fill that gap. At some point after our departure to heaven, the rider on the “white horse,” whom I believe will be the antichrist, will leap from the pages of Scripture and gallop through the world subduing nations with a message of unity and building a better future (Rev. 6:1). For a brief time, the world will marvel at his charm and eagerly follow him.

We may see The Great Reset start to take shape before the rapture, but it’s after our departure that the globalists’ dreams of utopia will fully materialize, albeit for a short while.

What Does All This Mean for Us?

So, besides the nearness of the rapture, what does all this mean for us as New Testament saints?

In 1 Thessalonians 5:3 we read, “While people are saying, ‘There is peace and security,” then sudden destruction will come upon them as labor pains come upon a pregnant woman, and they will not escape.” I believe this day of the Lord “sudden destruction” will happen shortly after our departure. The tribulation, which kicks off with the peace accord between the antichrist, Israel, and others (Dan. 9:27), will start many months after the rapture.

2. Evil may increasingly prevail in our world before the rapture occurs. We know our world will soon go through a time of unspeakable evil and distress during the tribulation and that we will be in heaven before the Lord pours out His wrath during this time. What we do not know, however, is how much more of the prospering of the wicked we will see before Jesus appears to take us home.

Psalm 37 assures us that God will punish the evil we see around us, but it also implies that we may see more success on the part of the wicked before Jesus steps in to judge the world (Psalm 37:7).

3. It’s time for the church to wake up to the nearness of its departure from this world. I will not spend much time here because I know that the great majority of those reading this post are awake. But sadly, so many believers remain oblivious to the signs that warn us of the Lord’s soon return. They do not recognize the lateness of the hour in which they live.

4. The Importance of keeping our eyes on the prize. Those of us who are awake to the signs of the times know that a great prize awaits us. I love the words of Romans 8:23 in this regard, “And not only the creation, but we ourselves, who have the first fruits of the Spirit, groan inwardly as we wait eagerly for adoption as sons, the redemption of our bodies.” Not only will we see Jesus, but He will give us immortal bodies and welcome us into His eternal family. I cannot think of a a more valuable prize anywhere on earth,

In Philippians 3:14 Paul wrote, “I press on toward the goal for the prize of the upward call of God in Christ Jesus.” I believe we can at least apply this verse to the rapture because that is what the apostle ends up talking about (see 3:20-21). The rapture is our ultimate honor. What greater prize than to be suddenly with Jesus in glory with imperishable bodies and ultimate wholeness (Col. 3:4)?

The state of the world, combined with biblical prophecy, tells us that Jesus’ quick return for us and sudden intervention in this world is ever so close. He may not come for us this week, next month, or even during the coming year, but on the other hand, He may return for us before we place our heads on our pillows tonight or the sun rises tomorrow morning.