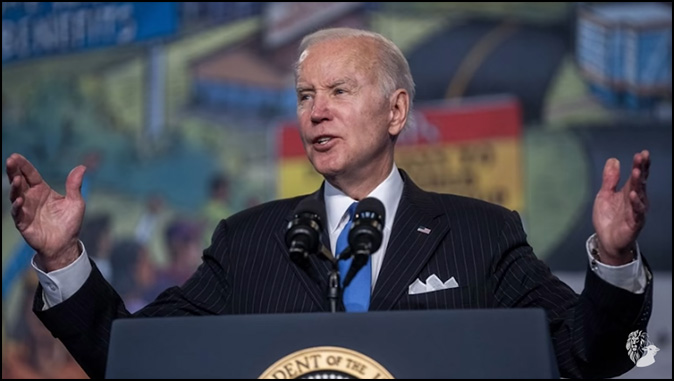 Our Leaders Have No Idea
By Nathan Jones

A Lack of Wisdom

Nathan Jones: In Daniel 12:4, an angel prophesied how in the end times people will have great knowledge and travel all over extensively. Well, there’s no doubt that we are certainly living in that time period.

But, with all of our great knowledge, it seems like we as a society don’t have a lot of wisdom. We are watching events unfold in the world, such as the war in Ukraine, where it has become readily apparent that our top leaders lack any kind of discernment. As we are watching the war in Ukraine unfold it seems as if everybody’s decision-making process has gone on the blink. Our leaders just don’t know how to handle Putin or know what to do about the Russian incursion. Why do we today have so much knowledge at our fingertips but seem to lack any kind of wisdom? And, does the Bible have anything to say about this condition?

Though we have institutions within the government that are designed to gather intelligence, even with all of that data at their disposal, they are displaying a lack of godly wisdom. Certainly, the leaders of our nations don’t seem to be exhibiting very great discernment and wisdom to extricate us from situations that continue to grow worse and worse day by day.

Nathan Jones: I agree. It seems like the things that they should logically be doing in seeking peace and trying to work with Putin to put an end to this war with Ukraine and Zelenskyy is out the window. Everybody is posturing and saber-rattling. Their behavior reminds me of what we read in history about how just before World Wars I and II the same kind of posturing and saber-rattling was going on among the world’s leaders. They too were posturing and looking to get more attention. Their lack of wisdom ended up inflaming a situation that caused millions upon millions of people to die.

Do you think that the stupidity of our current leadership is pushing us towards a third world war? Some leaders are even calling for World War III!

Tim Moore: Yes, they are calling for a world war right now, and that is very tragic and sad. We always can see in hindsight much more clearly. For example, back when there were human rights violations happening in the civil war in Syria, which was being supported by Russia at that time, former President Obama said that he was going to draw a red line. Well, that red line got crossed, and so Obama said he’d draw another line. He didn’t follow his red line threat up, and people took notice.

I promise you, evil actors around the world take notice when the United States does not live up to its commitments. And so, even now, as the Biden Administration declared that all of their sanctioning efforts prior to Russia launching a war would prevent Putin from invading Ukrain, now President Biden claims that he never thought it would prevent anything and that you don’t deter war with sanctions. True, how do you stop a war with sanctions? Sanctions have never been proven effective. Biden is trying to have it both ways, though I think quite frankly that he is often very confused.

Again, North Korea, Iran, and other evil actors in the world are paying attention. China still has its eye on Taiwan. Just recently, China has joined forces with Russia to offset the power of the West. And so, the world is facing a period of upheaval in human history over the next several months and years.

Nathan Jones: You brought up a good point about what Obama did with the Iran Nuclear Deal back when he was President, which is the same as what Biden is doing now — basically the same thing he is doing with Russia by weaponizing sanctions. Obama assumed that sanctions would cut off Iran’s money so that they’d stop building nuclear weapons. Well, that clearly didn’t work. So, Obama instead secretly behind the cover of night shipped cases of gold bullion over to Iran. He was bribing Iran to stop doing what they were doing.

I would expect that at some point soon we will see NATO and the United States and its allies join together and declare, “Alright, if we cannot stop Russia with sanctions, we’ll stop this war in Ukraine by buying Putin off with gas and oil contracts or promising him parts of other countries.” Such a disastrous policy was enacted by the UK Prime Minister Neville Chamberlain when he gave Poland and Czechoslovakia away to the Nazis. What we’ve got here is a dangerous, dangerous situation.

Tim Moore: The war in Ukraine demonstrates that Russia is not down and out. Russia is still very much alive and a threat. Russia is under the leadership of a man who holds no limitations to his own desire for more power and conquest. Someone like Vladimir Putin will turn their eye on Israel someday.

Is this war between Russia and Ukraine the start of the Gog-Magog War of Ezekiel 38-39. No, but you can start to see the players getting into position and aligning themselves for that war that will eventually take place.

Right now, Christians scattered throughout the world still remain a restraining force on evil. We are not restraining very effectively, but through the power of the Holy Spirit, we are restraining evil to a degree. When we are removed in a blink of an eye at the Rapture of the Church, then there will be no more restraint on all of these hostilities. So, I see many bad things happening right around the corner.

Again, when our President is asking Russia in the midst of this war to act as the intermediary in creating a new nuclear agreement with Iran, you realize that something is very much out of whack, as certainly our foreign policy is today.

Nathan Jones: That lack of wisdom is very much like the United Nations putting all of these countries that are persecuting their own people on the UN Human Rights Commission. We are definitely living in a very messed up time period! But, the Bible prophesied that this spirit of the Antichrist — this spirit of lawlessness — will rise in the last days. We definitely feel like we are living in that day.

The Bible clearly shows there will be signs of the end times that point to the Lord’s soon return. The second one that Jesus gave in Luke 21 concerns wars and rumors of wars. He said they would increase in frequency and intensity the closer we got to His return. So, from the negative perspective, yes, we are living in dangerous perilous times. But, on the plus side, we know from these signs that Jesus Christ is coming soon.

If you don’t know Jesus today, we invite you read the book of John. Get to know your Savior and Creator. Then, repent of your sins and accept Jesus Christ into your heart and life.