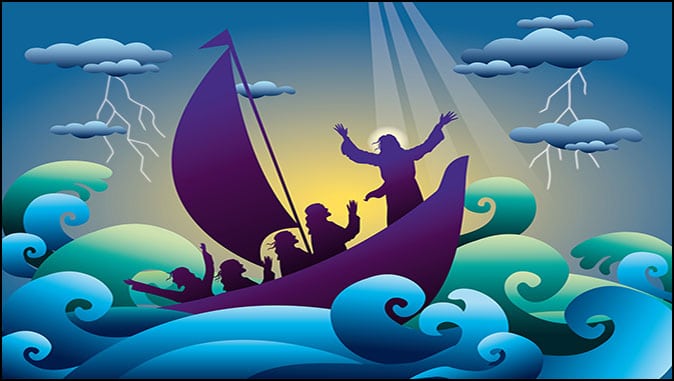 On Stormy Seas
By Hal Lindsey

For a long time, those of us who teach Bible prophecy have warned of coming storms. That includes geopolitical storms, natural disasters, wars, pestilences, actual weather-related storms, and even global supply issues. We were mocked, sometimes by our brothers and sisters in the Church. But today, much of the world believes that disaster looms.

A recent study of 10,000 young people across 10 countries found that 56% believe humanity is “doomed.” Fully 75% of them found the future “frightening.” Climate change seems to be their biggest fear, but only one among many.

This atmosphere of fear sometimes infects Bible-believing Christians. It happens when we center our hope on political figures or political solutions. We should, of course, work to enact good policies and to elect godly leaders. But the problem is not primarily political. It is spiritual. The world has turned morality on its head. People call evil good and good evil. We see a worldwide movement to paint God’s word as wicked and God’s people as dangerous.

In the end, we know we will win. We know that before the worst of the bad times, God will snatch away Christian believers. But between now and then, we can expect some severe difficulties. Followers of Jesus may be tempted to despair. When that temptation comes, remember the identity your Companion on this journey.

Mark 4:35-41 tells about Jesus and His disciples headed across the Sea of Galilea when a dangerous storm arose. Waves broke over the sides of the boat. They staggered on deck as the storm tossed them to and fro.

Where was Jesus? They found Him asleep at the back of the boat, His head resting comfortably on a cushion. As you read their words to Him, you can feel the frustration they must have felt. “Teacher, do You not care that we are perishing?”

Jesus arose. He rebuked the wind, and He said to the sea, “Peace. Be still.” Immediately, a calm fell on the air and water. He said to His disciples, “Why are you so fearful? How is it that you have no faith?”

At that point, they still did not fully understand the identity of the One who had been sleeping in the stern. Mark 4:41 says, “And they feared exceedingly, and said to one another, ‘Who can this be, that even the wind and the sea obey Him!’”

We, too, are on a journey with the Lord of Lords and King of Kings. He’s right here with us. Yet, too many times, we give in to fear. He always keeps His word, and His word is full of promises. However, like Martha in Luke 10:41, we are often “worried and troubled about many things.” “Through many dangers, toils, and snares, we have already come.” But we sometimes forget all that He has done in bringing us to this point.

Instead of embracing fear, allow Him to speak peace and stillness to your heart. Even in the storm — perhaps I should say, especially in the storm — allow Him to give you “love, power, and a sound mind.” Be filled with His Spirit. Walk in love and confidence, ready always to share Him and His word wherever you go. Be at peace.