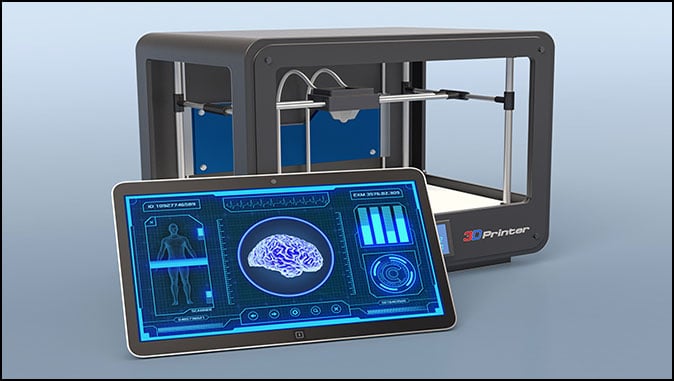 New Technologies and the End Times
By Britt Gillette

According to its press release, Aleph Farms uses “a proprietary system, similar to the vascularization that occurs naturally in tissues,” and this gives the steak a “similar shape and structure of its native form as found in livestock before and during cooking.” Using this new technology, the company now has the ability to produce any type of steak.

All this comes on the heels of a December announcement that 1880, a restaurant in Singapore, will become the world’s first restaurant to serve cultured meat. Known for its innovative menus, 1880 debuted the lab-grown chicken made by U.S. start-up Eat Just, which takes a small amount of poultry cells and grows them into meat at a rapid rate using a bioreactor. From start to finish, the process takes about 14 days versus 45 days for traditional chicken. As these technologies mature, they offer the prospect of cheap and abundant food for the whole world.

None of this should come as a surprise. In my 2017 book Racing Toward Armageddon, I wrote:

Revolutionary Technologies are on the Horizon

These technologies are just a glimpse of what’s coming. The convergence of new printing technologies with artificial intelligence, quantum computing, and advanced manufacturing techniques will fundamentally transform the world in which we live. Bioprinting steaks and chicken is just the beginning. Such technologies foreshadow the arrival of a truly revolutionary technology known as molecular manufacturing.

Clean, Renewable, and Inexpensive Energy – The most abundant source of energy on the earth is sunlight. The reason solar power only meets a small fraction of our energy needs is because the technology used to capture and store solar energy is expensive and inefficient relative to fossil fuels. Molecular manufacturing will change that. New technologies will make solar power the cheapest and most widely available source of energy.

Increased Health and Wellness – Molecular manufacturing will also make clean water available to everyone. It will revolutionize medical treatments, prescription drugs, and surgery. The result will be dramatic increases in health, well being, and average lifespans.

Material Abundance – Molecular manufacturing will bring a revolution in the production of goods, manufacturing objects where they’re needed and dramatically decreasing labor, energy, storage, and transportation costs. The result will be an explosion in material wealth.

While all this sounds great, there’s a dark side to these new technologies as well…

The Rise of Big Brother

In George Orwell’s novel 1984, the world is introduced to “Big Brother” – an omnipresent, all-powerful and “well-intentioned” totalitarian regime. The book’s hero, Winston Smith, lives in a world where every citizen is under 24/7 surveillance. Personal privacy doesn’t exist. Government dominates every aspect of life. Monitors in Winston’s apartment spy on him at home. Other devices spy on him when he’s not at home. Hidden cameras and microphones capture his words, deeds, and even his facial expressions. His mail is opened, and “thought police” search for and arrest any citizen who dares to have thoughts or feelings outside of those sanctioned by Big Brother and the ruling elite.

Winston’s world is a place of absolute government control. No conversation, movement, or transaction goes unnoticed. The government is watching – always. In the decades since Orwell first released 1984, people have marveled at what they see as great insight into our future. And they’re right to do so. 1984 is becoming our reality, and the arrival of molecular manufacturing and other advanced technologies will only serve to accelerate the process. Below are some of the undesirable (and I believe unavoidable) outcomes of advanced technology:

Global Government – Technological innovations will soon upset nuclear deterrence and the balance of power built on the notion of mutually assured destruction (MAD). World-destroying nuclear war will become obsolete, replaced by new weapons of war. In a post-MAD world, many people see only two options:

1) An unstable arms race likely to end in global annihilation, or
2) Global government

Global Surveillance – With advanced technology, the ability to see and hear everything will become even easier for government. Already, most people voluntarily reveal the most intimate details of their lives. They upload pictures of themselves and their friends to Facebook. They reveal personal information on Snapchat and Twitter. And they set up Siri- and Alexa-enabled devices in their homes. These devices respond to voice commands and make life easier. But they also spy on you. By definition, they’re always listening. If you have one, that means you voluntarily placed a listening device in your home. In some cases, you placed a camera in your home as well.

As time goes by, devices like these will become smaller and cheaper. As they become smaller and cheaper, they’ll appear everywhere. Imagine trillions of HD cameras and microphones – each one the size of a dust particle. Some might be so small you can’t see them. These cameras and microphones will constantly record everything in the world. Like dust, they’ll spread across the earth and settle on every surface. They’ll be everywhere.

They’ll settle on your clothes. They’ll come in through the ventilation in your house. They’ll stick to the bottoms of shoes, and they’ll blow through the streets. And this “nanodust” will send everything it sees and hears to the government. Artificial intelligence will sift through all the video and audio feeds. It will search for specific phrases and “undesirable” language. With such technology, the government will have the ability to “listen” to every conversation on earth. No one will escape the ever watchful eye of “Big Brother.”

Not only does cryptocurrency offer a way to permanently record every financial transaction, but it also tracks where you go and what you do. It tracks the websites you visit and makes note of who your friends are. While credit cards, debit cards, mobile phones, and social media profiles already track much of this information, a state-sponsored cryptocurrency will provide the government with 100% unfettered access to this information. It will create a closed, government-controlled economic system where you’ll be dependent on the government for every transaction you engage in.

That means if the government decides they don’t like you, they can turn off your access and completely freeze you out of the economic system. They can dictate what you can and can’t buy. They can tell you where you can and can’t go. In essence, state-sponsored cryptocurrency gives government complete and total control over all commerce.
How Will the World React?

At first, it’s likely the world will focus only on the positive benefits of these advanced technologies. After a brief period of upheaval, global government will usher in a new era of peace – much like the Pax Romana of ancient Rome. Most people will be happy with the material abundance and increased standards of living, even if they have to sacrifice freedoms in exchange.

If one man brings these benefits to the world, how will the world view him? Imagine if Satan came to earth and used promises of world peace and miracle healings to trick the world into following a false messiah. Do you think he would be effective? Jesus said he will.

After encounters with Jesus, miraculous events regularly took place. The mute could speak. The deaf could hear. The paralyzed could walk, and the blind could see. Because of these miracles, many believed in Jesus. But others refused to believe, even though these miracles verified His identity as the Messiah. What did Jesus say about these people? He said, “I have come in my Father’s name, and you refused to receive me. But a day will come when another man comes in his own name, and him you will receive” (John 5:43-44).

When the Antichrist arrives on the world scene, he’ll bring with him advanced technology that will:

The world will appear to be at peace, and the world will receive him as its savior. As the world looks forward to a “Great Reset” and new technologies transform the world, you can be sure the Antichrist is waiting in the wings. All the signs are present. Just look around you. The world is in the midst of a global pandemic (Luke 21:11). Israel is back in the land (Jeremiah 23:7-8). The Jewish people are back in Jerusalem (Luke 21:24-28). And the Gospel is being preached throughout the world (Matthew 24:14). We’re also on the verge of developing technologies which will bring about global government (Revelation 13:7) and a global monetary system capable of controlling the entire world (Revelation 13:16-17). Jesus said when you see all these signs, you can know His return is near (Luke 21:28). We can see those signs now. Jesus is coming soon.

Changing Our Minds By Bill Perkins As we move into full-blown communism in America, our…

The Miracle Before Us

The Miracle Before Us By Hal Lindsey The State of Israel may seem normal. But…