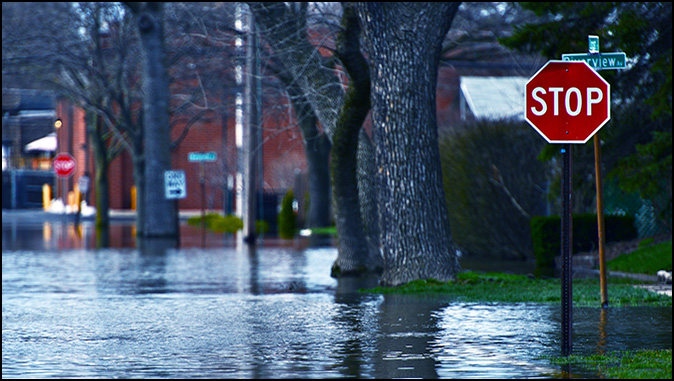 The Dallas-Fort Worth area has been hit by massive flooding. In some areas, the rainfall is a remarkable reversal given the dramatic drought that Dallas had faced for months. Several rainfall gauges had recorded more than 10 inches. A record-breaking 3.01 inches of rainfall were recorded in one hour at Dallas-Fort Worth International Airport. The previous one-day record for rainfall in Dallas County was set in July 2004.

Authorities conducted water rescues and evacuated residents from areas with ongoing flooding; cars remained abandoned, some parked on the sides of interstates, either flooded or damaged by crashes; numerous highway ramps and lanes were shut down. At the interchange of Interstates 30, 45 and 75, floodings had traffic down to a trickle in one lane.

Last week’s record-setting rainfall in Dallas was called a ‘one-in-a-thousand-years event.’ Something is clearly out of whack because, in less than a month, 5 other rain events have also been classified as 1,000-year floods. Here is a list of them:

Aug 5: The driest place in North America bucked its reputation when a 1,000-year rain event dumped water onto Death Valley National Park in California. The deluge damaged miles of roadway and forced park visitors to shelter in place. NASA satellites tracked the flooding from orbit.

Aug 2: Southern Illinois was drenched by 8 to 12 inches of rain in 12 hours. An area just south of Newton, Ill., recorded 14 inches of rainfall in just 12 hours, according to the National Weather Service.

July 28: Rural areas of eastern Kentucky were flooded after receiving up to 14 inches of rainfall. Entire communities were wiped out. The death toll stands at around 40 people.

In the past few years, we’ve had flood events that would seem to be on a 1-in-10,000-year scale. I didn’t observe the 2018 Maryland flood that much, but I was closely watching the 2019 and 2017 floods. The Harvey floods were so bad, I asked myself how is this possible?

In 2019, flooding caused devastation across the Midwest. Several states battled some of the worst floods they have ever had to experience in a lifetime. In Nebraska, every major river system in that state had record-level floods. This historic flooding was so intense that over 10 states had to seek federal disaster funds in order to recover from the damage it caused.

2018: The Maryland flood came just two years after a historic and deadly flash flood struck the region, another heavy rain brought around 8 inches in two hours to Ellicott City, Maryland, resulting in a disaster that was assessed to be much worse than the previous one. This was the second “1,000-year flood” event in two years.

2017: Hurricane Harvey affected 13 million people from Texas through Louisiana, Mississippi, Tennessee, and Kentucky. By October 13, 2017, at least 88 people had died from the storm. Harvey made landfall three times in six days. At its peak on September 1, 2017, one-third of Houston was underwater. Harvey caused $125 billion in damage.

The term “1,000-year flood” should be considered antiquated by now because it doesn’t apply to reality. If it was true, it would warn of a rainfall event that is expected once in every 1,000 years, meaning it has just a 0.1% chance of happening in any given year. When the city of Houston said it had the third “500-year” flood in the past three years with Hurricane Harvey, something was clearly not right.

I would never ever live in a flood zone. To have your house flooded is one of the most devastating experiences a person can endure. People who live near a river and are fed this 1,000-year flood nonsense will be very confused to see their yard turn into a lake.

If all these floods are directly related to climate change, someone will eventually win a Nobel prize. I don’t think there is a scientific answer for the increase in floods. At best, climate change should only drop the 1,000-year floods down to 600-year events. Any meteorological factor that can explain why we are having so many devastating floods would probably predict Noah-type floods by 2050.

I have always maintained that they are part of the birth pangs that Jesus warned of his return. If you are a dedicated student of Bible prophecy, you can claim to have a Ph.D. in biblical common sense.

“And when these things begin to come to pass, then look up, and lift up your heads; for your redemption draweth nigh” – (Luke 21:28).