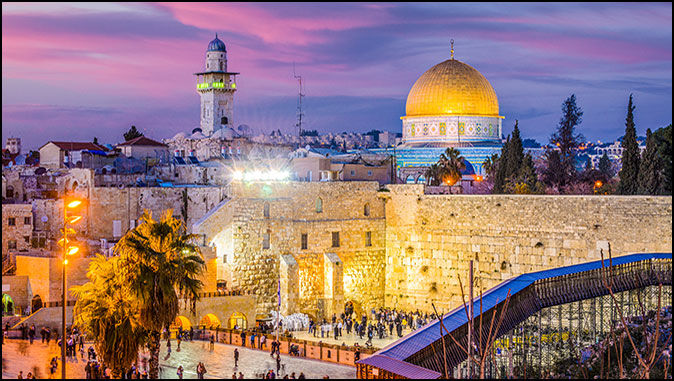 Jewish Preparations for the Messiah (Part 2 of 5)
By Dr. David Reagan

There is another Jewish sign that is not included in the list above and which is often overlooked. It is the preparations that the Orthodox Jews of Israel are making for the construction of their Third Temple. The First Temple was Solomon’s that existed for 360 years (957 BC to 597 BC) before it was destroyed by the Babylonians. The Second Temple (often referred to as Herod’s Temple) was built after the Jews returned from their Babylonian captivity. It existed for 586 years (516 BC to 70 AD) until it was destroyed by the Romans.

The Bible clearly prophesies that a Third Temple will exist in the end-times during the Great Tribulation. The prophet Daniel talked about this temple (Daniel 9:27, 11:31 and 12:11), as did Jesus (Matthew 24:15) and the Apostle Paul (2 Thessalonians 2:3-4). And the Apostle John should be added to the list because he mentions the Tribulation Temple in his end-time prophecies (Revelation 11:1-2).

The point I am leading up to is that the preparations being made today for the building of the Third Temple — what will be the Tribulation Temple — are a clear sign that we are living in the season of the Lord’s return.

The Modern Movement for a Third Temple

Today’s effort to build the Third Temple seems to be rooted in a non-fiction book written by the Pulitzer Prize-winning novelist, Herman Wouk. The book was titled, This Is My God, and was published in 1959. The book prompted Jews worldwide to take action toward the rebuilding of their temple.

In 1982, after many years of disagreement about methods of approach, three groups of Orthodox Jews decided to combine their forces and cooperate with each other toward the goal of rebuilding the Jewish Temple. One of those groups is still active today. It is called “The Temple Mount Faithful,” and its dynamic leader is a former Israel Defense Force officer named Gershon Salomon.

This organization began as a nationalistic movement rather than a religious one. Its founder argued that the building of a Third Temple was essential to Jewish identity and sovereignty over the land of Israel. But in recent years, it has developed a more religiously-oriented apocalyptic and messianic platform in order to raise money among American Evangelicals. Its efforts have been very successful, and this has resulted in the waning of its influence among the Orthodox in Israel.

The powerhouse group today that is leading the effort to build a Third Temple is The Temple Institute in Jerusalem. It has strong Orthodox support and has also received funding from the Israeli government.

This organization hit the ground running, and since its establishment in 1987, it has prepared all the vessels needed for the Temple ceremonies and sacrifices, as well as the necessary incenses and oils. The clothing for the priests has been prepared, including the breastplate and crown to be worn by the High Priest. Various musical instruments are being made along with furniture like the table of showbread and the altar of incense. All of these items can be seen online at the Institute’s website.

The Institute was founded by a zealous Jewish rabbi named Yisrael Ariel. (I think it is interesting that Ariel is a poetic, scriptural name for Jerusalem! See Isaiah 29:1-2,7.) Several rabbis have served over the years as the Executive Director of the Institute, the most prominent being Yehuda Glick.

The most expensive item the Institute has constructed for the temple is the golden menorah that will be placed in the Holy Place. It is covered with 95 pounds of pure gold and cost several million dollars. It is currently on display in a glass case at a site overlooking the Western Wall.

The Temple Institute has also constructed a copper laver to be used by the priests for ceremonial cleansing. Even more significantly, a temporary mobile altar for animal sacrifices has been prepared and was publicly dedicated at the end of Hanukkah in December of 2018.

The altar is nine feet square by five feet high and is made of aerated concrete. It has been ruled to be fit for use in the Temple until a more permanent one can be made. Rabbi Baruch Kahane served in the role of High Priest at the dedication ceremony held next to the Western Wall of the Old City, near the Jaffa Gate. The priests wore biblically accurate garb appropriate for the Temple. The Jerusalem municipal authorities did not permit a sheep to be killed on-site, so one was slaughtered at another location, and sections of the meat were burned on the altar.

Rabbi Yehuda Glick came to Israel in 1974 at age 8 when his family made aliyah from New York. He served in the IDF between 1986 and 1989 as a combat medic (his father was a medical doctor). He then earned degrees in Torah Studies and Israeli History.

In 1996, he began working in the Israeli Ministry of Immigration Absorption. He resigned this position in 2005 due to his strong opposition to the Gaza Disengagement Plan. At that time he became the Executive Director of The Temple Institute and began his efforts to free up the Temple Mount to Jewish ascension.

In the years following, he was arrested several times for praying on the Temple Mount. In 2013, he conducted a hunger strike to protest a police ban forbidding him access to the Temple Mount. This activism established him as the foremost proponent of Jewish sovereignty over the Temple Mount, and that led to an assassination attempt in October of 2014 when he was shot four times, point-blank, by an Arab terrorist. Glick miraculously survived the attack.

He served in the Israeli Parliament (the Knesset) from 2016 to 2019 as a member of Benjamin Netanyahu’s Likud Party. Today he continues his advocacy for Jewish control of the Temple Mount through his Shalom Jerusalem Foundation which he established in 2019.

In the third part of this series, we’ll look at what items are missing that would be needed to bring about the Third Temple.