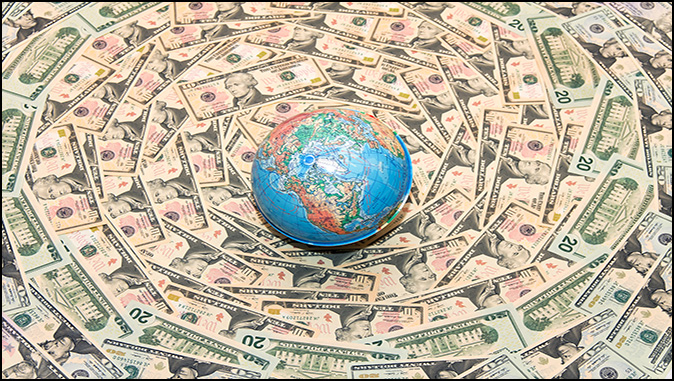 Is the Dollar about to Be Dethroned as the World’s Reserve Currency?
By Todd Strandberg

The dollar has been the world’s reserve currency since the U.S. and its allies agreed at the 1944 Bretton Woods conference. According to the International Monetary Fund, the dollar’s share of global reserves stands at 59%, far above the euro at 20.5%. After the euro, there’s a steep drop to the No. 3 slot, which is occupied by Japan’s yen at 5.83%.

What really cements the dollar as the world’s reserve currency is an agreement reached with Saudi Arabia. The U.S. promised to protect Saudi Arabia if it would require that all oil sales be made in dollars. If a nation wants oil from the kingdom, they would have to go to the F.X. market and buy dollars. The majority of global oil sales — around 80% — are done in dollars.

As the world’s primary reserve currency, the U.S. enjoys the “exorbitant privilege” that goes along with that, such as interest rates that are lower than they might otherwise be and the government being able to fund budget deficits in perpetuity.

The U.S. has a massive shortfall in trading with the rest of the world. The U.S. goods trade deficit reached a record $1.09 trillion in 2021 — an increase of $168.7 billion (18.3%) from the 2020 trade deficit — according to new U.S. Census Bureau data. In 1991 our trade deficit was only $28 billion. There is very little concern about the deficit because we can simply print the money to pay for our imports.

We do export a lot of goods and services to our trading partners. In December of 2001, the value of our exports was $228.1 Billion, but we imported $308 Billion worth of stuff, leaving us with a deficit of $80 Billion.

Over the years, the quantity of dollars has built to a huge amount. According to the U.S. Department of the Treasury, foreign countries held a total of $8 trillion dollars. It would be very natural to assume that the $1 dollar bill has the highest quantity in circulation. There are actually more $100 bills in circulation than $1 bills.

One of the greatest dangers to the dollar is inflation. High levels of inflation are eating away at the purchasing power of the dollar. Once people realize what is happening, they will use their dollars to buy hard assets like gold, silver or real estate.

Another reason for nations to back away from the dollar is sanctions. The U.S. has frequently used the dollar to punish rogue nations. Over the years, the White House has increasingly turned to economic sanctions to punish other nations. In the 90s, there were about 20 sanctions issued every year. In 2021 there were over 100 sanctions issued. One explanation for the massive increase in the number of sanctions is the start of issuing them against individuals.

Russia is currently the top target because of its invasion of Ukraine. Putin has been very crafty at avoiding sanctions. He sold off all of Russia’s holdings of U.S. bonds and purchased large quantities of gold, which has no financial loyalty to any nation.

The latest move by Putin is to require all purchases of Russian commodities to be made in rubles. This is very clever because many nations need Russian natural gas, oil, and fertilizer. By forcing them to buy rubles, Putin will gain access to foreign currency.

China is making moves that may harm the dollar. It is in active talks with Saudi Arabia to price some of its oil purchases in yuan. This move would dent the U.S. dollar’s dominance of the global petroleum market.

Because America is not mentioned in Bible prophecy, it is very likely that the U.S. is going to suffer a financial meltdown or some other calamity. If the Antichrist is able to control the world’s financial centers, the Mark of the beast will clearly become the world’s reserve currency.

“He causeth all, both small and great, rich and poor, free and bond, to receive a mark in their right hand, or in their foreheads: And that no man might buy or sell, save he that had the mark, or the name of the beast, or the number of his name” (Rev 13:16-17).