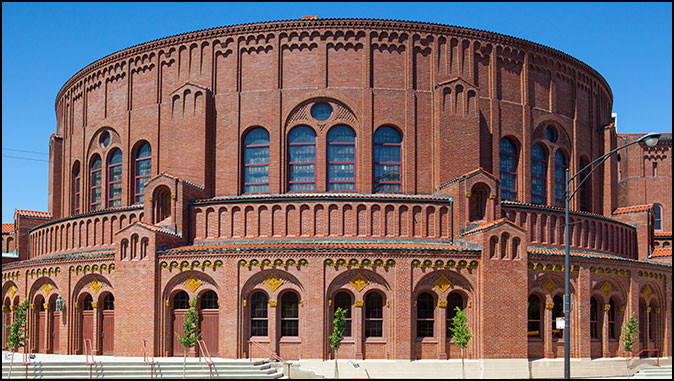 Some of the prophetic voices to America have come from outside the USA. Peter Marshall came from Scotland and Aleksandr Solzhenitsyn came from Russia. Both of them observed with great clarity the challenges and trends evident in American culture several decades ago.

One of the living prophetic voices featured in Dr. David Reagan’s book, God’s Prophetic Voices to America, also immigrated to America. He brought a fresh perspective on what made America a “City on a Hill” and what now threatens to relegate her to the trash heap of history. And so, I traveled to Chicago — America’s Windy City — to Moody Church to meet this visionary pastor — Erwin Lutzer.

Tim Moore: Pastor Lutzer, thank you for welcoming me to Chicago and to the Moody Church.

Erwin Lutzer: So glad that we can be together, Tim, to talk about common interests, but also to encourage the Church at this critical moment.

Tim Moore: It certainly is a critical moment. You have hit the nail on the head! As a matter of fact, you have been very outspoken in speaking about the trends and challenges facing America. You’ve had a very impactful ministry here at Moody Church. And, you are also recognized as a prophetic voice because you’ve’ reached out, not only with your speaking but with your writing, to impact lives all across America and around the world. And so, I consider you a watchman who has been bringing society insight into the dangerous trends threatening our culture and our nation.

I’m curious, what inspired you to share those insights beyond your congregation at Moody Church?

Erwin Lutzer: When I first came to Moody Church, I think oftentimes the church was perceived as a place where Christians came to worship, but then they went home and that was that. It was a wonderful ministry for many, many years. But, at the same time, I said to myself, “I really do think that the people of the community have to look inside of our walls.” And, the only way we could do that was to make sure that we went beyond our walls, and so we began planting ministries within the city. So, for example, we began the Moody Business Network which connected us to businessmen around the city. We encouraged a ministry called By the Hand Club for Kids, which is still being run under the auspices of Moody Church, which has been really transforming communities, especially through its children. Through these outreaches, we wanted to help people to understand that we were a church that was meeting the needs of our community and building those critical bridges into our communities.

Tim Moore: The interesting result is that you not only reached out to the community in Chicago but expanded throughout the state of Illinois and then into the entire nation. The church has impacted far beyond Chicago.

Continuing to look back, you began pastoring in 1971. As a Canadian, what was your image of America prior to coming to the States? What did you find upon arriving?

But, the thing that I discovered is that people are alike all around the world. They share the same certain needs and certain expectations. When it comes to preaching, what I discovered is when you preach to human needs that you never lack an audience.

Tim Moore: No, you do not. And so, you preached to human needs, but from the truth of God’s Word. That is why I appreciate your messages because you’ve served faithfully as a conduit of God’s declared truth. I’m grateful for that.

Tim Moore: One of our modern-day prophetic voices who has already passed away was Aleksandr Solzhenitsyn. His writings implied that the ideal of America offered him a great deal of hope, even as he suffered in the Soviet Union’s gulag system. But, once he’d finally arrived in the United States, he was dismayed to discover that the intellectual elites who tend to be on the forefront of a nation’s culture had already abandoned the very foundations that made America great. Solzhenitsyn came and spoke at various colleges and universities and was initially hailed as a survivor of the Soviet system, but eventually, the academic community ostracized him for speaking truth to those who no longer believed in truth.

So, I want to hear about your experience trying to proclaim truth to a culture that oftentimes dismisses and scoffs at truth itself.

Erwin Lutzer: What I tried to do as a pastor was to speak to the controlling realities of our culture. There are two things that I avoided. Number one, there are those who divide the church because of social justice theories that are just not biblical justice. They oftentimes divide congregations in terms of the color of their skin.

So, here was my philosophy: I believed it was so important to speak to these cultural issues and not avoid them. Now, I believe in the exposition of Scripture — teaching throughout the Bible’s 66 books. I did that, too, but at the same time I spoke about same-sex marriage and I spoke about transgenderism. What I tried to do is to address those concerns that are so obvious that I believe we as pastors need to speak to them. But, that balance — avoiding these two extremes — I think helped me in terms of being acceptable, and oftentimes, widely listened to.

Tim Moore: Many things remind me of Chicago from Upton Sinclair’s book, The Jungle, which was set here. Other movies and television shows were set in this quintessentially midwestern city, everything from The Bob Newhart Show to The Blues Brothers to a whole host of National Lampoon movies. Chicago is also the hometown of Al Capone, Oprah Winfrey, and President Barack Obama. For the last few years Chicago has trended in a more leftward direction.

As the sixteenth pastor who served for 36 years at Moody Church, following in the footsteps of great men like Dwight L. Moody, how did you thrive and grow in Chicago during all of its turbulent years?

Erwin Lutzer: Once again, the word that comes to my mind is balance. In other words, what we tried to do is to focus on Jesus Christ and the Gospel, without chasing what we could call “rabbit trails” in various areas. The other thing is this: I believed it was very important for us to be a welcoming community, even though we couldn’t be an affirming community. There’s a big difference there. What we wanted to do at the church is to create an environment reflected in our purpose statement: “Moody Church is a trusted place where anyone can connect with God and others.”

I say this to the glory of God, that on any Sunday morning at the Moody Church, there were more than 70 different countries of origin represented. I used to tell the congregation that we were really getting ready for Heaven because in Heaven you have people from every tongue and nation worshiping all around God’s throne. What we wanted to do is to have the diversity of our community, but at the same time without dividing people on secondary issues, preaching the Gospel of Jesus Christ with a sense of conviction and clarity. Wherever the Gospel is preached, if it touches human needs and people see their need for a Savior, then you’ll find a fruitful ministry.

In Part 2 of this interview with Pastor Erwin Lutzer, he will reveal Cultural Marxism’s insidious goals.