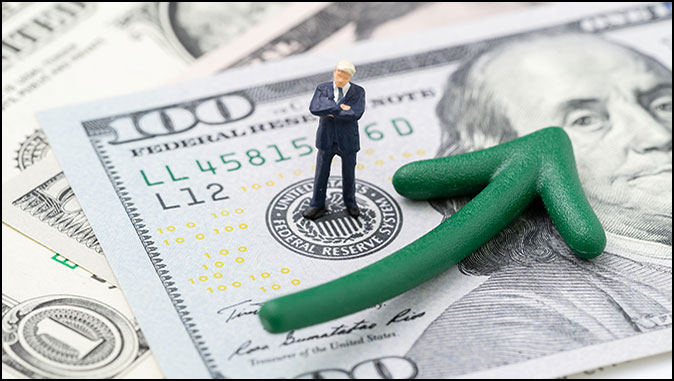 Inflation Dragon Is Back
By Todd Strandberg

Few people remember the inflation that occurred in the 1970s. From 1970 to 1980, the price of everything doubled. Federal Reserve chief Paul Volcker finally slew the inflation dragon by raising interest rates to 21%.

It appears very likely that the 2020s is going to be a repeat of the 70s. The Fed has printed so much money in the past few years that prices are guaranteed to rise. In just the past seven months, 40% of all the money in existence has been freshly created.

The main way the government manages inflation is by keeping interest rates at very low levels. Each month the fed goes into the market and purchases $120 billion of bonds. The 10-year bonds are at 1%, and the 30-year bond is at 2%. Once inflation gets above 5%, no amount of smoke and mirrors will be able to hide the fact that the value of the money is rapidly being destroyed.

What would probably cause the dollar to go down is the massive trade imbalance we have with the rest of the world. They send us goods, and we ship them dollars. We now depend so much on imports, there is a massive backlog of container ships at our nation’s ports.

If the world suddenly realized the foolish nature of this trade relationship, America could find itself unable to get the most basic products. I was shocked to learn that we import material required to produce even the most common drugs. The Ford Motor Company has just had to slash its earning projections because it can’t get microchips for its vehicles. When we reach a point where we depend on third-world nations to make simple products, I think we’ve become a fourth-world nation.

The job market is another key source of inflation. As workers demand more money for their labor, prices are forced higher. There is such a shortage of labor, people are being paid to do job interviews. One Florida McDonald’s started offering a $50 incentive to anyone who went in for an interview to help hire more workers, according to Tampa Bay’s CBS affiliate WTSP.

“At this point, if we can’t keep our drive-thrus moving, then I’ll pay $50 for an interview,” said Blake Casper, a McDonald’s franchise owner in Tampa.

A tweet shared on social media on April 15 shows the sign offering $50 at a location off North Dale Mabry Highway and West Chestnut Street in Tampa. WTSP reported, citing Business Insider, the restaurant did not have many applicants despite the incentive.

Some business owners who spoke with the Associated Press said some “would-be workers” are worried about getting COVID-19 at work and prefer to live off unemployment benefits, which are higher during the pandemic.

I recently recorded a 5-minute audio promotion for my chapter in Terry’s book Lawless. I still find it amazing that my chapter is still valid. When I was writing it in March of last year, it looked like the second Great Depression was about to unfold.

I labored on because I knew God was going to continue to hold the world together. Inflation will add to the pressure on the economy, but the trigger point is going to be the rapture.

“For the Lord himself shall descend from heaven with a shout, with the voice of the archangel, and with the trump of God: and the dead in Christ shall rise first: Then we which are alive and remain shall be caught up together with them in the clouds, to meet the Lord in the air: and so shall we ever be with the Lord. Wherefore comfort one another with these words” (1 Thes. 4:16-18).