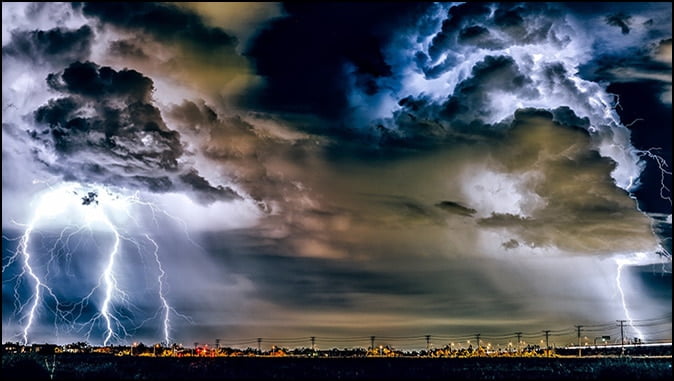 Let me state at the beginning of this article that President Donald Trump is no friend of the “New World Order.” He is not a globalist. He’s an America-first guy. Yet he finds himself in the midst of a crisis that is foreshadowing global government.

This spring, former UK Prime Minister Gordon Brown called on world leaders to form a temporary global government in response to the corona pandemic. Brown stressed the need for a task force of world leaders, health experts, and others, as well as leaders of international organizations that could have executive powers to execute the response. And he wants an “executive” to run this new system.

At the same time, the U.N.’s Antonio Guterres called for a 10% global tax to prop up world economies. This would be an international “stimulus package.” The battle cry is, “A global response for global unity so no individual country can risk infecting another.”

The globalists have waited for a crisis—but who knew it would be health-related? Health is our most cherished value. If you lose it, you lose everything. It can involve pain and suffering. If you scare enough people with health-related problems, they will melt like warm butter in your hand. They will welcome anyone—even a Mr. Fix-It—who can guarantee them the basics in life, including a vaccine that will forever protect them and spare them pain and suffering.

Someone has to lead this New World Order. The Bible says it will be a man called Antichrist (BP note: This man actually first shows up as a world leader and eventually becomes the prophesied Anti-Christ), but he is not here yet. The Church must be removed before this man-with-a-plan can appear.

Enter Bill Gates, one of the world’s most prominent globalists. He is a younger version of George Soros and he is just as questionable. Sadly, he has billions of dollars to play with and he is doing so with the Bill and Melinda Gates Foundation. Right now their focus is a global digital ID that will be a part of a global vaccination plan. A plan to stop Covid 19 in its tracks. We are being told that no one is safe from Covid 19 until we get a vaccination.

Prophecy News Watch writes, “Bill Gates has emerged as a global authority in the wake of this virus crisis, funding vaccines and advising governments on how to respond to the pandemic. Gates was working to establish a global digital ID infrastructure long before the outbreak, which is now promoted as a way to combat the virus.”

The article continues, “ID2020—a project initiated by Gates’ Foundation, the Rockefeller Foundation, pharmaceutical corporations, and technology firms—is pushing the concept that every human on the planet needs biometric verification because ‘to prove who you are is a fundamental and universal human right,’ according to the ID2020 website.”

Gates is not the only one in favor of such systems. Director of the National Institute of Allergy and Infectious Diseases, Dr. Anthony Fauci, who (has appeared) with Trump at the daily news briefings, recently confirmed in an interview with CNN that the idea of Americans carrying “certificates of immunity” is a possibility being considered to identify people who have been infected with the Covid-19 virus and help jump-start America’s economy in the coming weeks.

I have worked for years with free-lance writer and investigative reporter Leo Hohmann who writes, “Why, in most states, are you allowed to go to a liquor store, pot dispensary, or a crowded Walmart but not to church? These are decisions the government has no constitutional grounds to make for American citizens.

“If politicians want to infringe upon these basic rights, then they should stop being cowards and declare martial law, thereby formally suspending the U.S. Constitution. You don’t get to have your cake and eat it too, snatching civil liberties while claiming the Constitution is still in place.”

Hohmann concludes, “New rules are being fashioned for us as we speak. Changes are coming for everything — how we shop for groceries, how we pay for products (cashless?), even how we greet our fellow man (no handshaking!).

“If you don’t obey these rules, you will be publicly shamed and blamed as exhibiting anti-social behaviors detrimental to the common good. The way we ‘do life’ may never return to normal if President Trump doesn’t intervene and take back the reins from these two doctors (Fauci and Birx) aligned with the vision of the United Nations, Bill Gates and a host of creepy NGOs like the Rockefeller Foundation and the World Economic Forum.”

Is ID2020 the “Mark of the Beast”? To have the “Mark”, we need a “Beast” and the Antichrist does not show up until the Church is removed in the Rapture. Is this a forerunner? It certainly could be. Are people who are pushing these systems apocalyptic players? They could be.

One-worlders occupy both political parties in America and are prominent in all major countries of the world. One of the most obvious globalists was George H.W. Bush. Others include Henry Kissinger, John Kerry, the Clinton’s, Tony Blair, Franklin Roosevelt, the Rockefellers, Emmanuel Macron, Gordon Brown, the banking empires, and dozens within (our government’s) “deep state.” The climate-change crowd are motivated by one-world ideas.

There are many globalist organizations starting with the United Nations but also the Bilderberger’s, Club of Rome, Council on Foreign Relations, Trilateral Commission, Silicon Valley, the Vatican, and so many more. Pope Francis is called “the vicar of the New World Order.”

Their plan is hidden in plain view on the Georgia Guidestones, erected in Georgia in 1980. The first goal is to get earth’s population down to five hundred million people! That’s bumping off almost seven billion people. These are not nice people!

The world is crying for a leader. The European Union is melting. On April 20 Israel finally formed a shaky “emergency coalition government” after a year of government failure. Progressives in America would much rather see America’s demise than our prosperity.

Over half the world has asked the International Monetary Fund for a bailout. A cashless society is being pushed. A universal income is being promoted. The entire globe is reeling. World leaders are confused and terrified. And globalists never let a crisis go to waste!

There isn’t a storm coming—the storm is here. The globalists will seize this opportunity to install what they think is their perfect form of government and that is a one-world system. They have a major obstacle: The Church is still here.

Though there are shades of global government forming, it cannot blossom until the Tribulation. The Bible is clear that God has prepared a plan of escape for the Church via the Rapture.

I close this article with wise words from my prophecy partner Terry James. He writes, “The real pandemic facing the world today is 100 percent fatal—not only to physical life, but to life that follows physical death.

“It is the virus called sin. Each and every person who has ever been born on this fallen planet with the exception of One, the Lord Jesus Christ, is born with this spiritual virus. It will, for the one afflicted, without remedy, end with the person suffering the process of dying forever.

“This hellish, spiritual virus turns mankind against God. It thus brings about thinking that is upside-down—an insanity that precludes rationality. That’s what we’ve been witnessing for the last four years in particular. The Lord of Heaven has turned the anti-God forces over to a ‘reprobate mind’” (Romans 1:28).

And just as they did not see fit to acknowledge God any longer, God gave them over to a depraved mind, to do those things which are not proper, Rom. 1:28

Terry reminds us, “There is coming a second new world order. It will be ushered in by King Jesus, who will reign and rule over an Eden-like planet that He will refurbish upon putting an end to Armageddon.

“Finally, at the end of Christ’s reign, there will be no more pandemics that corrupt and destroy God’s creation called man. The new heavens and new earth will provide the perfect environment—the utopia the globalists with their climate-change rants proclaim they want. But they will not be around to enjoy it. Sadly, they will have succumbed to the pandemic that is far deadlier than the coronavirus.”

Terry James concludes, “To avoid being terminally and eternally ill because of this terrible, spiritual virus, confess with your mouth the Lord Jesus Christ, who died for your sins. Believe then in your spiritual heart that He rose from the dead. Do this and you have God’s Word on it. You are now saved.”

“…that if you confess with your mouth Jesus as Lord, and believe in your heart that God raised Him from the dead, you will be saved; for with the heart a person believes, resulting in righteousness, and with the mouth he confesses, resulting in salvation.” – Rom. 10:9-10

The Cry of The Spirit and The Bride

Harbinger of the Messiah

Harbinger of the Messiah By Matt Ward “Behold, I will send my messenger, and he…

Feeling the Urgency By Dennis Huebshman Watching all the headlines today, faux and real, and…